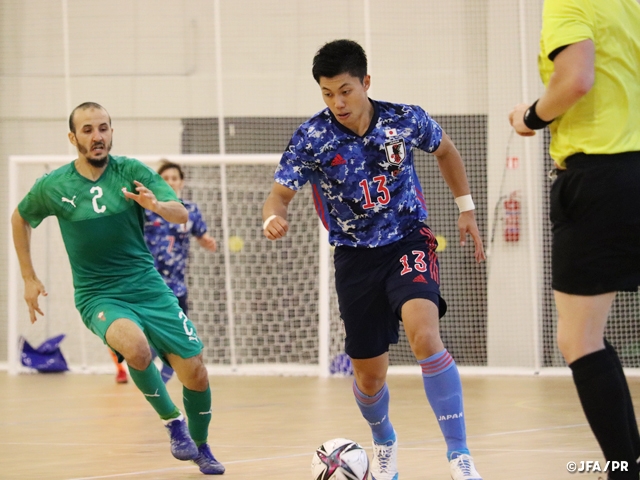 This was Japan’s fifth match since arriving in Europe and their final match ahead of the FIFA Futsal World Cup, which is scheduled to kick-off on Sunday 12. Their opponent, Morocco, has won back to back titles of the Africa Futsal Cup of Nations, which also served as the qualification to the FIFA Futsal World Cup, and with Japan scheduled to face Angola in their first group match, this friendly provided a precious opportunity to simulate that match.

For their final test match ahead of the big tournament, coach Bruno GARCIA named PIRES Higor in goal with YOSHIKAWA Tomoki, Oliveira, HENMI Katsutoshi Rafael, and Shimizu as the starting line-up. The match started with Japan taking the initiative, as they applied aggressive pressure to keep the ball inside the opposing territory but struggled to find ways to score the opening goal.

Japan rotated three sets while anticipating for their opportunity to score against the African champions. MORI Gensuke forced a turnover and struck a shot, followed by a shot fired from distance by YAGI Kiyoto, but both attempts fell short from finding the net. Despite making efforts through set pieces, Japan couldn’t break the deadlock, as the first period ended scoreless.

The second period started with SEKIGUCHI Yushi stepping in front of the goal, as Japan continued to seek for ways to take the lead. While the two sides showcased a see-saw game in the early minutes, Morocco started to show signs of fatigue as the match approached the half hour mark. In the 29th minute, Shimizu capitalised on a corner kick he earned himself to score the long awaited goal for Japan. Now trailing by a goal, Morocco started to accumulate fouls, which led to one of their players getting ejected after receiving his second caution of the match. Japan took advantage of the situation by converting a free kick in the 31st minute, as Oliveira calmly converted the spot kick from the second PK mark. 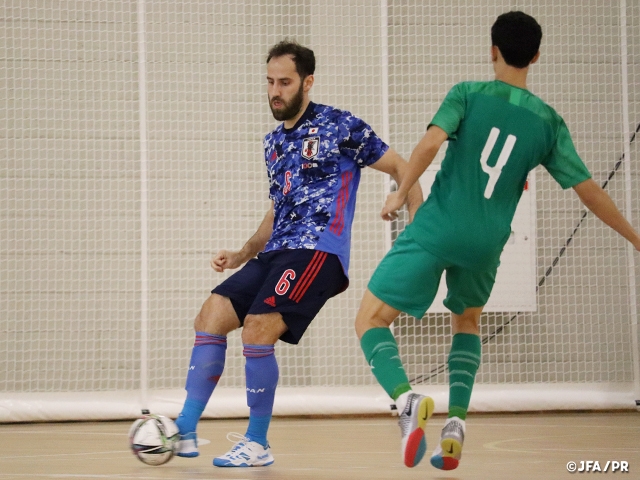 With time running out, Morocco deployed their powerplay, but Japan responded with counter shots to threaten the open goal. In the 38th minute, Henmi dribbled through two Moroccan players to deliver the ball to Oliveira who set up the goal of Shimizu to put the final nail in the coffin, as Japan won the match 3-0.

In their final test match, Japan showcased their persistency to fight through the tough times, made adjustments on the court, and capitalised on the few opportunities presented to them. 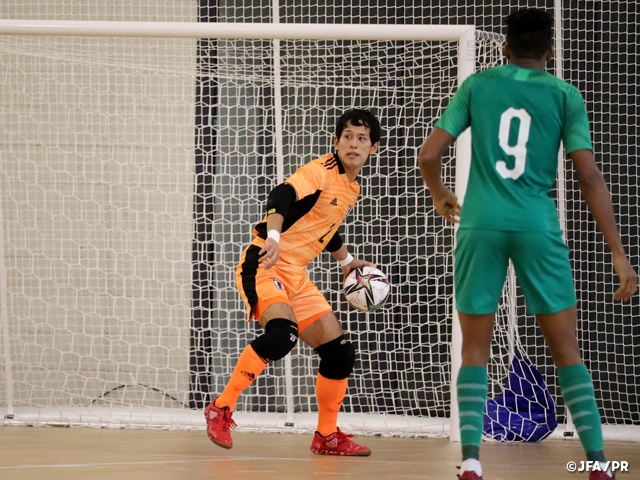 The FIFA Futsal World Cup Lithuania 2021™ will kick-off on Sunday 12 September, while Japan is scheduled to start off their action against Angola on Tuesday 14.

Bruno GARCIA, Coach
This was a very good match. Morocco consists of quality players with great speed. They share a style peculiar to other African teams, who we rarely have the opportunity to play against, and their characteristics are very similar to Angola, who we are scheduled to face in our first match at the group stage. We were able to execute our game plan and steadily control the match against such opponent. Many things went well, and this was a fruitful match for us ahead of the World Cup. We will spend the next seven days recovering our body and polish the small details so that we can win through the group stage.

FP HOSHI Shota (Nagoya Oceans)
It is great that we were able to earn a 3-0 victory in our final prep-match ahead of the World Cup. We were able to reconfirm what our strong points are, what we need at the World Cup, and make clear distinction between our strengths and weaknesses. There will certainly be tough times during matches, and how we respond as a team becomes a huge focal point. We managed to showcase our persistency and capitalise on the set-pieces, which turned out to be the difference in this match. The World Cup is not an easy tournament, so the fact that we were able to play with patience to win the match gives us great confidence moving forward. There were discussions to cancel this World Cup, but it ended up being postponed to the year I have decided to retire as a player. I am honoured to be able to represent Japan in such tournament, and I am committed to give my utmost effort to fulfil the duty and responsibility of the Japan National Team.

FP YOSHIKAWA Tomoki (Nagoya Oceans)
We were able to take control of the match from the early minutes, but there were stints where we lost our composure as well. However, we managed to keep a clean sheet while scoring goals in the second half, so our overall performance was not so bad. During halftime, we went over our defence and how we wanted to pressure the ball. While our opponent started to lose their intensity at the end, we managed to keep up the intensity level throughout the entire 40 minutes, which turned out to be the difference in this match. We struggled to win matches during this Europe tour, so I hope this victory will give us momentum heading into the World Cup.

FP SHIMIZU Kazuya (Cordoba Patrimonio/Spain)
We weren’t able to play good defence in the first half, but after talking it out during halftime, we were able to make the necessary adjustments and start winning the ball deep in the opposing territory in the second half. By scoring the opening goal, we were able to apply pressure and frustrate our opponent, which led to their foul trouble and the PK that gave us the second goal. It felt like the second half went exactly according to plan and I am very glad that we were able to win this match. From the first half, we knew that the opponents were drawn towards Arthur during our corner kicks, so I made a run to open myself up and Yoshikawa delivered a perfect pass towards me, which I only had to tap it in to score that goal. It is great that we were able to score goals from set-pieces. Henmi did a great job evading the pressure to set up the third goal and Arthur’s pass was telling me “You better score this,” so I just swung my leg as hard as I could. It is great that we were able to finish off this series of friendly matches in a high note and we will continue to make adjustments ahead of our first match to achieve our goal as a team.