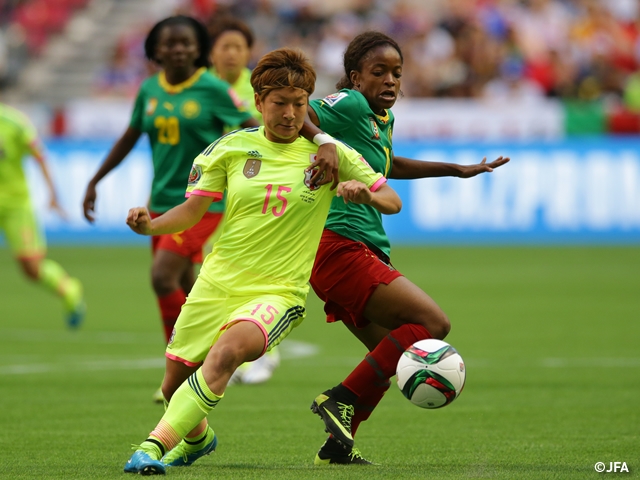 At the 2nd match of the group stage in the FIFA Women’s World Cup Canada 2015, Nadeshiko Japan took on Cameroon National Women’s Team on 12 June (13 June Japan time) at BC Place Stadium in Vancouver.

The temperature was 18 C, and despite the bright sunshine, cool breeze was blowing through the stadium. For the day’s match, Japan changed five starters from the line-up for last one against Switzerland. Head coach SASAKI Norio said it was targeted to “keep changing sides and attacking space on both sides in order to feed cross balls to forwards.” The key players on both flanks were SAMESHIMA Aya on the left and KAWASUMI Nahomi on the right.

At the beginning, Japan started creating their rhythm by moving the ball carefully. In the sixth minute, Kawasumi sent a cross from the right and Sameshima dashing to the space behind OGIMI Yuki put it into the goal for the opener. Defensively Japan prevented Cameroon from playing freely by making sure to check every possession and help each other. Then in the 17th minute, MIYAMA Aya fed the ball to the box from the short corner and SUGASAWA Yuika headed it in to extend their lead to two goals. 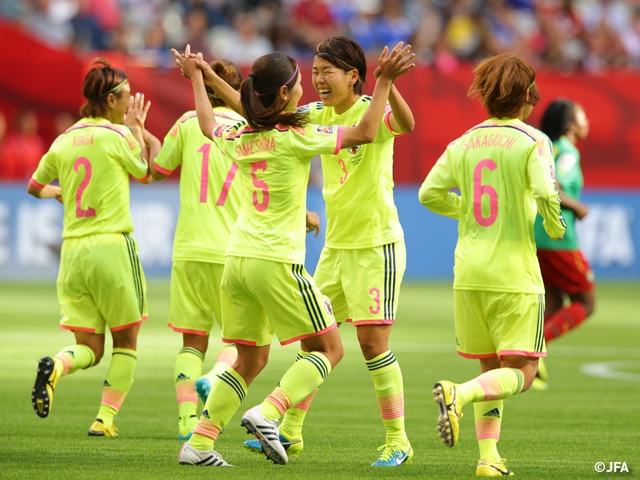 Even though Japan defended through many crucial moments, finally they conceded a goal in the 90th minute when their right flank was broken through. But without any more goal scored for both sides the match finished 2-1, which gave Japan the spot in the round of 16. Miyama was selected as the Player of the Match again after receiving the same recognition in the first match.

Ando Kozue, decided to leave for home due to injury, watched the match in the stand, saying “I want to thank my teammates for making sure to win the match. I believe they will reach the goal of the back-to-back championship. I may leave them, but my heart will be with them battling together.” 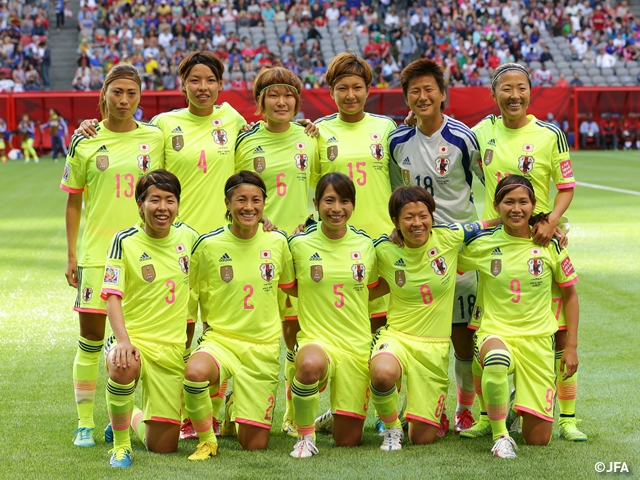 SASAKI Norio, Head Coach (Nadeshiko Japan /Japan Women’s National Team)
Today we had to control the match as we felt the athleticism and physical strength of Cameroon players. It was big that we scored the opener at the beginning of the match by using space well and creating our offence.

But after scoring two goals, we stopped moving the ball. There was enough space to do that, but we weren’t able to support each other smoothly. When they started taking advantage of their quickness and power more than before, we wanted to deal with it more flexibly. But we couldn’t, so I think it’s something we have to improve. At last we won it 2-1. Our players worked so hard and stayed focused and patient until the end.

MF #8   MIYAMA Aya (Okayama Yunogo Belle)
It turned out to be a very tough match. We have many more things to work on, but the biggest takeaway was getting three points by all of us playing together. What we need to work on is the fact that we weren’t able to play how we wanted two second halves in a row.

We are not being able to do what we can normally do in terms of decision making and overall skills. There are many more things to improve like sharing the same mindset and playing with more poise. We want to study today’s match film and learn from it for next match.

DF #5   SAMESHIMA Aya (INAC Kobe)
As a team, it was good that we won the important match in this group stage. On the first goal, from the beginning of the match, my teammates kept attacking the right flank, so I thought I would have a chance if I kept going to that spot. When I was defending, I thought my role was to check their quick player up front. So I dealt with it by paying attention to the positioning.

In the second half, just like the match against Switzerland, we as a team had more stretches when we got pushed back. We will need to share the strategy among ourselves on how to control the match, for example whether we keep putting pressure up front or we back off and stay defensive.

FW #15   SUGASAWA Yuika (JEF United Ichihara Chiba Ladies)
It was good that we kept defending as a team and got three points. The World Cup is a dream stage for me, and I have always wanted to score a goal there. So the goal I scored for the first time was a very happy one for me.

After watching videos of the opponents, I knew how they would react. Ogimi was ahead of me, so I thought I would go behind. Then there came a good pass, so all I had to do was head it in. I think it would have been better, if we had possessed the ball more in the second half. So I want to improve on that in next match.

Enow NGACHU, Head Coach (Cameroon Women’s National Team)
Our players played hard. Japan are a team with one of the best defence in the world. I knew it would be hard to score in front of the goal. After changing our game plan, in the last 15 minutes we could create many chances.

I am satisfied with our players’ performance because we kept playing well against the best team in the world. After allowing the two goal lead, we didn’t lose our positive attitude and I think we were able to show the world the potential of women’s football in Africa.