C. Osaka secure group lead with a draw, advance to ACL Round of 16 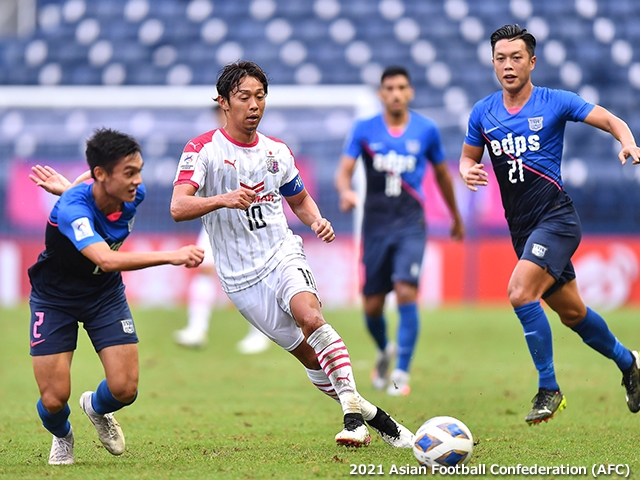 On Monday 9 July, Cerezo Osaka played their final group match in the AFC Champions League (ACL) 2021 East region, where they drew 0-0 against Kitchee SC (Hong Kong) at Buriram, Thailand. With this draw, Cerezo finished as the leader of Group J and followed Nagoya Grampus and Kawasaki Frontale to clinch the knockout stage. This was the first time for Cerezo to clinch the knockout stage as the group leader.

Ahead of this match, Cerezo had already clinched the knockout stage and were in position where they could still win the group with a 0-1 loss. However, the Osaka side displayed their full intention to finish off the group stage on a high note, as they applied aggressive pressure from the early minutes.

With the team rotating 10 players from their previous match, SAKAMOTO Tatsuhiro and TAMEDA Hirotaka penetrated the flanks, while OKUBO Yoshito and KIYOTAKE Hiroshi made attempts to threaten the opposing goal.

In the 37th minute Okubo struck a header off a cross delivered from the left, but his attempt was denied by the Kitchee goalkeeper. HARAKAWA Riki started off the second half by firing a shot off a pass of MATSUDA Riku, but the opposing goalkeeper once again made the save to keep the match scoreless.

Needing points to secure the top three runners-up position to clinch the knockout stage, Kitchee made tenacious efforts to initiate their offence through counterattacks, but Cerezo showcased their superiority in ball possession to take control over the match.

TIAGO and SEKO Ayumu were pushed up into the mix for set plays, while MARUHASHI Yusuke and Matsuda made attempts to break the deadlock, but the match ended in a scoreless draw. As a result, Cerezo have reached the knockout stage for the first time since 2014.

Following the match, Kiyotake mentioned, “We really wanted to win, so this draw is a bit disappointing.” However, coach Levir CULPI praised his players, “We were able to advance through because of all the efforts made by our players.”

“We need to raise the quality of our plays in the attacking third to become a winning team. That was something that was evident in the first half today.” Said the Brazilian coach, as he continued to mention, “We have not showcased the full potential of this team. We will be facing much tougher opponents, but if we can continue to improve as a team, we can win this competition.”

Coach Culpi also mentioned, “The ACL has brought competition within our team. We will try to make the most of this experience to build a team that can earn positive results at the J.League.”

In the other fixture played in Group J, Port FC (Thailand) defeated Guangzhou FC (China PR) 5-1 to finish in third of the group. Guangzhou, who stuck with their young squad, were not able to earn any points.

Kawasaki brings perfect record into the Round of 16

On Sunday 11 July, Kawasaki Frontale, who have won all of their matches in Group I, faced Beijing FC (China PR) at Lokomotiv Stadium, Tashkent. With KOZUKA Kazuki getting involved in two goals, the Kawasaki side earned a 4-0 victory to conclude the group stage with a perfect record, which is a feat accomplished by a Japanese club for the first time in 11 years.

After clinching the knockout stage in their match against Daegu FC (Korea Republic), Frontale rotated 10 players to give the younger players the opportunity to play, as they dominated the ball possession against the winless Beijing side.

Frontale’s first big chance came in the early minutes, when CHINEN Kei struck back to back shots from close range, but his attempt was saved by the opposing goalkeeper. The striker scored the opening goal in the 21st minute, when he responded to a cross sent by MIYAGI Ten and struck a shot that ricocheted off the goal post but managed to convert the rebound into the net.

Kozuka followed in the 37th minute, as he capitalised on a cross sent by Miyagi. In the 56th minute, TONO Daiya assisted the goal of Miyagi to make it 3-0 before the hour mark. The freekick taken by Kozuka in the 69th minute deflected off of a Beijing defender before finding the net to further extend the Kawasaki lead.

Leandro DAMIAO, IENAGA Akihiro, and TANIGUCHI Shogo were introduced in the final minutes to close out the match as Kawasaki showcased their dominance over Beijing in a match where Kawasaki took 34 shots while conceding just one shot from their opponent.

With this win, Kawasaki extended their points to 18, finishing the group stage with a perfect 6-0 record, which was done for the first time by a Japanese club since the 2010 Kashima Antlers. Kawasaki also scored 27 goals in the group stage, which was the most among both regions.

In the other match played in Group I, Daegu defeated United City FC (Philippines) 4-0 to clinch the knockout stage with the second best record among second place teams in the East region.

Kozuka who joined Kawasaki from this season commented, “I am glad that I was able to score my first goal with Frontale. I hope to get myself involved in more goals. Miyagi also mentioned, “I was given the opportunity to play in our final group stage match, and I feel like I was able to make a case for myself.”

Following the match, coach ONIKI Toru praised his players, “We were able to finish off strong and conclude the group stage with our sixth consecutive victory. The players did a great job to showcase a solid match.” 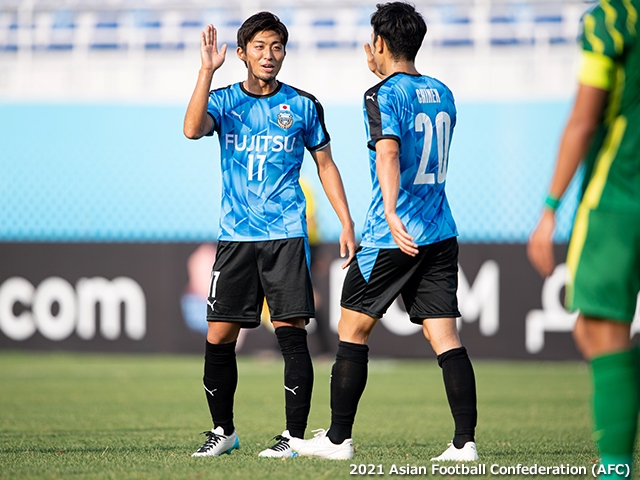 In Group H, Gamba Osaka faced Jeonbuk Hyundai Motors FC (Korea Republic) at Bunyodkor Stadium, Tashkent on Saturday 10 July. The Osaka side were eliminated from the ACL after losing the match 1-2.

Facing the Jeonbuk side who already clinched the knockout stage, Gamba was in a must win situation to keep their hopes alive to secure the top three positions among the second place teams. However, it was Jeonbuk who scored the opening goal, as GUSTAVO converted the PK earned by Park Jin-Seong to take the early lead.

Desperately needing a win, Gamba made their centre half MIURA Genta press forward to deploy powerplays, but conversely conceded to Jeonbuk in the 88th minute, as the Korean side exploited the open space left by Miura to score the decisive goal.

Following their championship campaign in 2008 and top-four finish in 2015, the Osaka side have now been eliminated at the group stage in three consecutive ACLs.

Miura reflected after the match, “We conceded early, which made it a difficult match.” Kurata also commented, “We had plenty of opportunities, but didn’t have enough quality to convert the chances.”

“This was a very disappointing result. We didn’t have what it takes to win this match.” Said coach MATSUNAMI Masanobu, who continued to mention, “We need to create more chances to score goals. We must make the most of this experience to become a better team.” Kurata also mentioned his take on the ACL, “We were given a priceless learning experience. It is important that we make good use of this experience to do better in the J.League.” 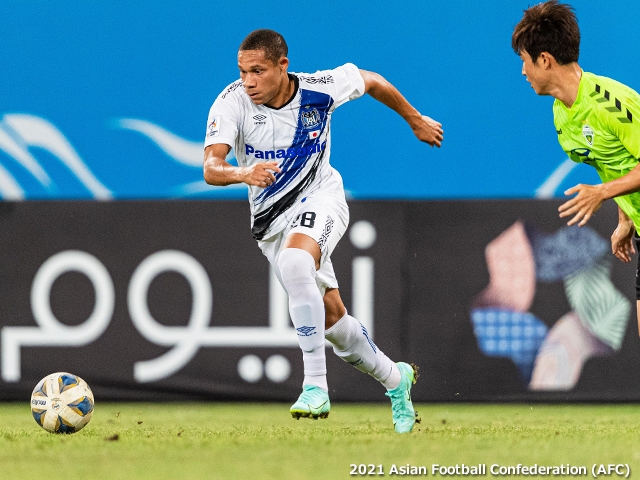 Kawasaki to face defending champions at Round of 16

With the conclusion of the group stage, fixtures for the round of 16 have been determined.

At the round of 16, Kawasaki will face the defending champions Ulsan Hyundai FC (Korea Republic), Nagoya will go against Daegu, and Cerezo Osaka will square off against Pohang, as all three clubs are scheduled to face a Korean side. Two time ACL champions Jeonbuk will play against Pathum.

The quarterfinals will also be played over one leg, with the fixtures scheduled on Sunday 17 October for the East region.

Levir CULPI, Coach (Cerezo Osaka)
We were able to advance through because of all the efforts made by our players. We can not return to our league while looking forward for the knockout stage. Today’s match made me want to win the ACL title even more. Throughout the group stage, we were able to keep possession of the ball, but we need to raise the quality of our plays in the attacking third to become a winning team. With that being said, I am satisfied with the overall performance of our team in these six matches. We rotated many players, so it was hard for the players to raise the quality of their combinations, but we played each match to bring out the best of our players and improve the overall level of the team. Considering the potential of our team, we are certainly a contender to win the ACL title. However, the players have not shown their full potential. We will be facing much tougher opponents at the knockout stage, but if we can continue to improve as a team and reach our full potential, I strongly believe that we can win this title.

MF KIYOTAKE Hiroshi (Cerezo Osaka)
We wanted to finish off the group stage on a high note, so this was a disappointing result. There were so many strict regulations, but I am very grateful that we were able to play given this current circumstance. With the help of the local staffs, we were able to focus on our plays, so I am thankful for all of their support.