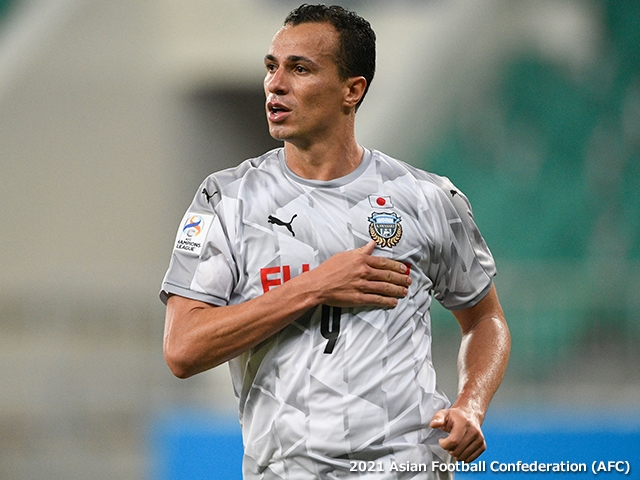 On Thursday 8 July, Kawasaki Frontale won 3-1 against Daegu FC (Korea Republic) in their fifth group stage match of the AFC Champions League (ACL) 2021 East region. Leandro DAMIAO scored a hat-trick to propel Kawasaki past the Korean side to book their fifth consecutive victory in Group I and to clinch their spot into the knockout stage.

The match between the top two teams in Group I saw Daegu apply aggressive pressure from the early minutes, while Kawasaki showcased their composure to keep the ball moving, despite the rough pitch condition of Bunyodkor Stadium. The opening goal came in the 35th minute, when Damiao made a diving effort to score off the deflection of MITOMA Kaoru’s shot to give Kawasaki the lead.

Daegu who trail Kawasaki by three points, responded in the 43rd minute, as EDGAR controlled the cross form the left side and slotted the ball into the Kawasaki goal to equalise the match before halftime.

Despite conceding the equaliser at the end of the first half, Kawasaki started off the second half strong, as they showcased a great sequence of passes that led to WAKIZAKA Yasuto’s shot inside the box, but his attempt was denied by the cross bar. In the 64th minute, Kawasaki penetrated the left flank by connecting short passes, which led to the goal scored by Damiao to make it 2-0.

In efforts to change the dynamics of the game, Daegu brought in LEE Keun-Ho who has the experience of playing for the Korea Republic National Team and in the J.League. With the Korean side gaining more momentum in the attacking third, JUNG Chi-In connected with the cross sent by CESINHA in the 82nd minute, but his attempt was denied by the fine save of Kawasaki’s GK JUNG Sung-Ryong.

With time running out, Kawasaki scored their third goal in the 87th minute, when Mitoma penetrated the left side, dribbling deep into the box before cutting the ball back to Damiao who calmly converted the opportunity to complete his hat-trick, giving Kawasaki their fifth straight win in the group stage.

After the match, the Brazilian striker who marked his sixth goal of this competition commented, “We knew we were up against a strong team and despite conceding close opportunities, we managed to fight through as a team to earn this victory.”

As a result, Kawasaki have extended their lead to six points in the group, clinching their spot into the round of 16 with one more match remaining. For Kawasaki, this will be their first appearance in the ACL knockout stage since 2017 when they reached the quarterfinals.

After seeing his side eliminated at the group stage in both 2018 and 2019, Wakizaka commented, “We have not been able to advance through the group stage in the recent ACLs, so it was great to see our side make a step forward towards our goal of winning a title in Asia.” Mitoma also reflected on the match, “We managed to keep our composure even after conceding the equaliser. We will give our best effort to win our last match to finish the group stage on a high note.”

Kawasaki will now face Beijing FC (China PR) on Sunday 11 July. On this day, Beijing lost to United City FC (Philippines) 2-3, dropping their record to one draw and four losses.

Cerezo are still left with a fixture against second place Kitchee SC (Hong Kong), but with the results of the fixtures played in Group G, the Osaka side have clinched the round of 16, as they have secured enough points to be within the top three runners-up among the five groups.

Following their 3-0 victory over Port FC (Thailand), Cerezo rotated 10 players against Guangzhou who are competing with mostly their younger players. Cerezo dominated the match from the early minutes and scored the opening goal in the 33rd minute when Kato converted the cross of MATSUDA Riki. Matsumoto made it 2-0 in the 53rd minute, which was followed by TIAGO’s goals scored in the 67th minute. Matsumoto and Kato each scored their second goal of the match in the 72nd and 92nd minute respectively, giving the Osaka side a 5-0 shutout victory.

After scoring a brace, Kato commented, “I was determined to score a goal today.” The 23 year old striker continued by saying, “I am glad I was able to contribute to the team’s victory by scoring a goal.” While also shared his take on the ACL where teams are required to make rotations, “We must compete with a total team effort, and everyone is aware of that.”

Cerezo’s coach Levir CULPI also commented after the match, “I would like to praise my players for this 5-0 victory. Such victory will bring growth to the team. We will continue to make adjustments to raise the overall level of the team.”

After Kitchee drew 1-1 against Port FC, Cerezo is now in position to secure the group lead with a draw or better in their final group stage match against Kitchee on the 9th. Veteran striker OKUBO Yoshito shared his aspiration ahead of their final match, “We hope to showcase a strong performance to finish off the group stage on a high note.” 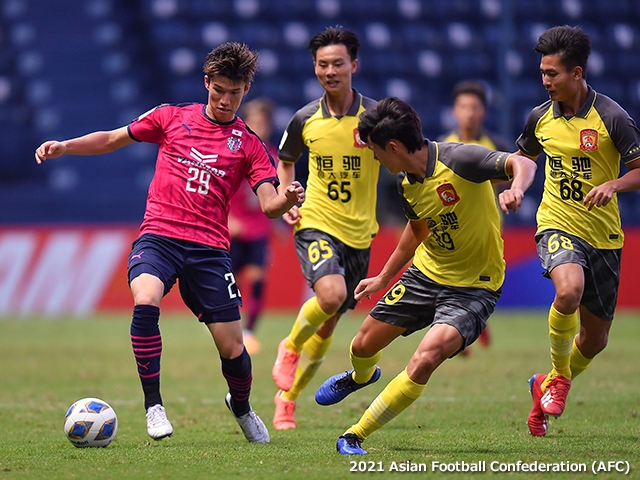 In Group H, Gamba Osaka, who is on the verge of elimination, faced Tampines Rovers FC (Singapore) on Wednesday 7 July. With KAWASAKI Shuhei scoring a hat-trick and the PATRIC’s brace, the Osaka side extended their tally to nine points after winning the match 8-1.

With just six points through four matches, Gamba was in a must win situation against Tampines. Following their match against Chiangrai United (Thailand), the team rotated seven players and entered with a four back formation. The Osaka side started off the match with great momentum, taking the lead in the 21st minute when KURATA Shu struck a spectacular goal from the edge of the box, followed by the goal scored by Kawasaki in the 25th minute to make it 2-0.

Despite getting off to a strong start, Gamba conceded from a corner-kick in the 27th minute, when Tampines’ Daniel Bennett struck a header to mark the Singaporean side’s first goal of the tournament.

However, a goal was not enough to stop Gamba’s momentum, as Kawasaki brilliantly assisted the goal of ICHIMI Kazunari in the 28th minute. Gamba had another golden opportunity before halftime, as USAMI Takashi earned a PK in the 39th minute, but the spot kick taken by Usami was denied by the Tampines GK Syazwan BUHARI.

Gamba kept the pressure on in the second half, as Kawasaki scored his second goal of the match in the 53rd minute, before earning a PK in the 60th minute. This time Wellington SILVA stepped up to take the spot kick, but Buhari came up big once again, denying the Brazilian from scoring from the spot.

Silva got his goal in the 75th minute to redeem himself, followed by the goal scored by Patric in the 78th minute. Kawasaki went ahead to score his third goal of the match in the 80th minute before Patric got his second goal in the 87th minute, to give Gamba an 8-1 victory.

On this day, Jeonbuk Hyundai Motors FC (Korea Republic) defeated Chiangrai 3-1 to clinch the top spot of Group H. Gamba will now face Jeonbuk on the 10th with hopes to clinch the top three runners-up position in order to reach the knockout stage.

Following the match, Gamba’s coach MATSUNAMI Masanobu mentioned, “With our backs against the wall, it was great that we were able to earn three points. We also managed to showcase the football style we were striving for.” The team will be needing help from the results of other groups, but the coach shared his optimism, “We still have a chance as long as we can showcase our style to earn results.” Kawasaki who scored a hat-trick in this match, also mentioned, “Winning the match is the absolute minimum requirement. If I am given the opportunity to play, I will ride this momentum to score and assist goals for the team.” 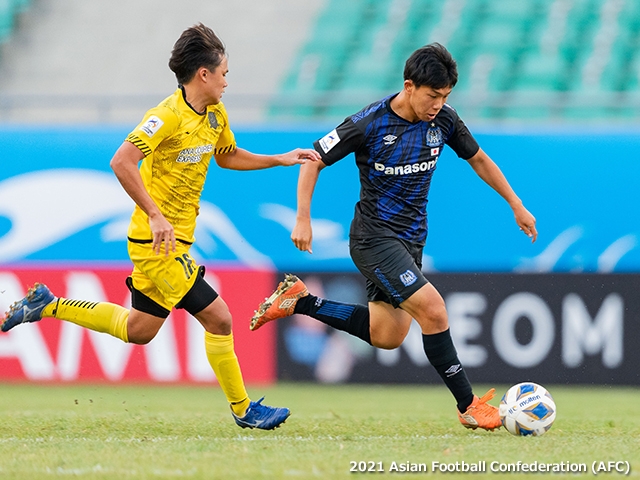 After clinching the knockout stage, Nagoya rotated seven players for this match against Pohang, who have clinched the second place position in the group, but still need points to improve their standing among the runners-up from other groups. Mid-way into the first half, Pohang created an opportunity from a corner-kick, as KWON Ki-Pyo connected with the delivery to strike a header, but Nagoya’s GK TAKEDA Yohei made a superb save to deny his attempt.

Following a scoreless first half, it was Nagoya who scored the opening goal. The goal came in the 50th minute, when the pass delivered by ABE Hiroyuki was flicked by SAITO Manabu to allow MAEDA Naoki to sneak a left footed shot into the near post to give Nagoya the lead.

Desperately needing a win, Pohang pressed forward to attack the Nagoya goal, as LEE Seung-Mo, LIM Sang-Hyub, and Kwon made attempts to level the score. Their efforts came to fruition in the 88th minute, when Borys TASHCHY took advantage of an error made by the Nagoya defence to score the equaliser.

However, the Korean side fell short from taking the lead, as the two teams walked away with a point apiece. For Nagoya, this will be their fourth appearance in the ACL knockout stage, with their best finish coming in 2009 when they reached the semi-finals.

Nagoya’s coach Massimo FICCADENTI reflected on the team’s performance thus far, “We have been challenging many things while striving to win each match, and that attitude was evident in today’s match as well.” With the team finishing with five wins and a draw at the group stage, the Italian coach commented, “It is not something you can achieve without a strong team foundation, especially when playing in an unknown environment. We were able to showcase the overall strengths of this team.” 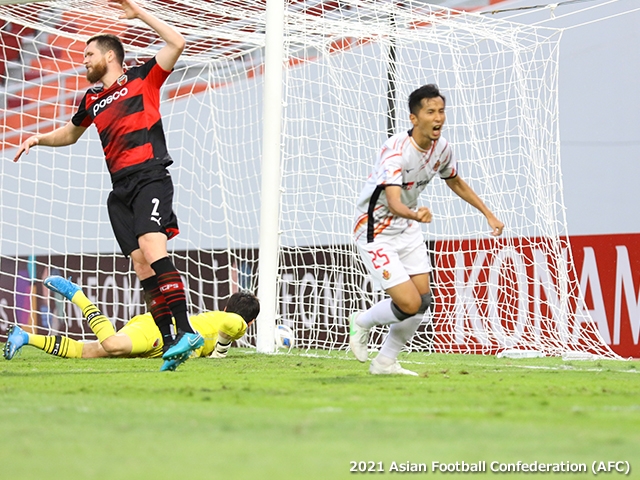 ONIKI Toru, Coach (Kawasaki Frontale)
We were in position to clinch the knockout stage with a win, so we were highly motivated for this match, and the players worked extremely hard to earn this win. We focused on challenging ourselves under the harsh pitch condition and weather, and it makes this victory that much more meaningful. This was a great match where the players’ development was evident. It was extremely hard to execute our game plan with this pitch condition, but the players made the necessary adjustment to fight through the match. I am proud of the fact that the players scored three goals to earn this victory, and we hope to continue to showcase strong performances in this Asian competition.

Leandro DAMIAO (Kawasaki Frontale)
I am glad that we were able to earn this victory as a team. My teammates have been making adjustments to suit my play and I am giving my best effort to fit into this team, so I feel that we have been able to play with a sense of unity. We still have one more match to play, so we hope to showcase another strong performance as a team, and it will be great if I can help the team by scoring more goals.