C. Osaka share a point with Port FC at the ACL 2021 East Region 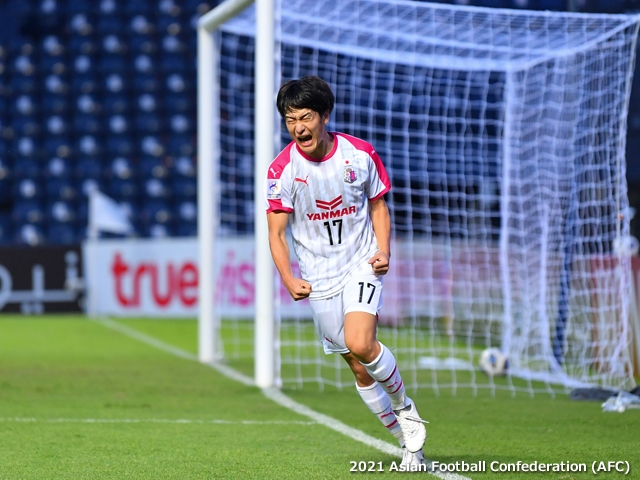 On Wednesday 30 June, Cerezo Osaka faced Port FC (Thailand) in the AFC Champions League (ACL) 2021 East region group stage, where SAKAMOTO Tatsuhiro scored the equaliser to draw the match 1-1. With this draw, Cerezo finished the first legs in Group J with two wins and a draw.

Following their win over Kitchee SC (Hong Kong) on the 27th, Cerezo rotated 10 players from their starting line-up, utilising fresh players who have not been featuring the league matches. With the group stage being played at Buriram, Thailand, Port FC have shown their advantage in playing under the hot and humid Thailand weather, as they entered this match seeking for their second victory.

Cerezo showcased their dominance in the early minutes, as they created countless opportunities to threaten the opposing goal. TAMEDA Hirotaka started off the action by striking a shot in the 16th minute, followed by KATO Mutsuki’s shot in the 18th minute. OKUBO Yoshito had back to back opportunities in the 23rd and 25th minute, before setting up the shot of Kato in the 29th minute, but the Osaka side fell short from finding the back of the net.

Port FC on the other hand, effectively utilised the width of the field to build their offence as Siwakorn JAKKUPRASAT and Pakorn PREMPAK penetrated the flanks. In the 28th minute, Philip ROLLER broke through the flank before sending a cross to John BAGGIO, but Cerezo GK MATSUI Kenya was there to prevent the Malagasy striker from scoring.

While both sides struggled to capitalise on their opportunities, the opening goal was produced from an unexpected play during additional time of the first half. After receiving the ball from his GK, Prempak sent a long feed towards the Cerezo goal. This delivery took a big bounce in front of the Cerezo GK and ended up in the back of the net.

With the team trailing by a goal, Cerezo introduced TAKAGI Toshiyuki and SEKO Ayumu to start the second half, while bringing in KIYOTAKE Hiroshi and Sakamoto in the 67th minute to add layers to their offence. This series of substitution came to fruition when Sakamoto collaborated with Kiyotake to play a quick give and go before firing a shot that pierced the Port goal in the 80th minute.

Gaining momentum from the equaliser, Cerezo continued to threaten the opposing goal, as the Osaka side earned a FK in the closing minutes of the match. With Kiyotake sending the delivery, Seko made an attempt to score the go ahead goal, but the Port GK was there to make the save.

Port also made their final effort to win the match, as Roller ran up the right flank before sending the ball to Nurul SRIYANKEM, who struck a shot, but failed to capture the target, as the match ended in a 1-1 tie.

On this day, Kitchee defeated Guangzhou FC (China PR) 1-0 to earn their second win. With two wins and a draw, Cerezo remain in first place, while Port and Guangzhou sits in third and fourth place, respectively. The Osaka side will now play the second leg against Port FC on 3 July.

In Group H, Gamba Osaka faced Chiangrai United (Thailand) in Tashkent on Thursday 1 July. After conceding the equaliser in the final moments of the match, Gamba drew the match 1-1, dropping their position to second place after drawing in back to back matches.

Gamba Osaka rotated 10 players since their match against Jeonbuk Hyundai Motors FC (Korea Republic) on the 28th. Despite creating numbers of opportunities in the first half, the Osaka side fell short from scoring in the first half but managed to take the lead in the early minutes of the second half, when the ball was connected through ICHIMI Kazunari and SATO Yota, before Leandro PEREIRA converted the cross.

However, it was Chiangrai who started to dominate the match mid-way through the second half. Gamba responded by utilising their substitutes, but the Thai side took full control over the ball possession in the closing minutes of the match. With just seconds left on the clock, Chiangai’s Brazilian striker BILL responded to a deflection of the shot taken by Sivakorn TIATRAKUL to score the equaliser.

With Jeonbuk earning a 9-0 victory over Tampines Rovers FC (Singapore), the Korean side has now taken the group lead with seven points, while Gamba drop to second place with five points.

Following the match, Pereira who scored the opening goal commented, “The goal gave me great confidence while the team is now aware of what we need to do in the second leg. The next match will be the most crucial match of this group stage, so we will prepare ourselves in the best way possible.” 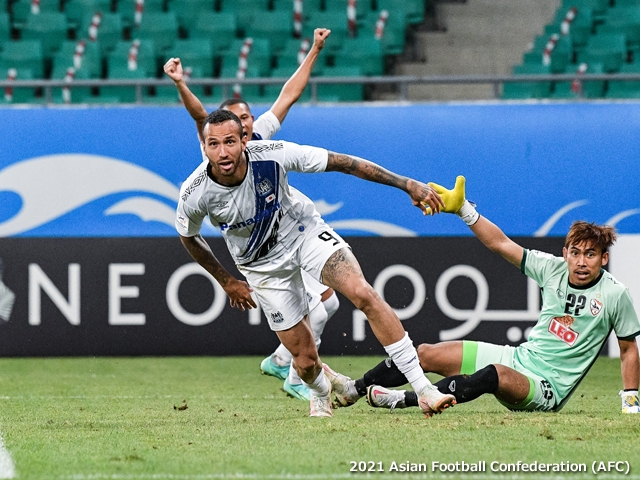 Nagoya win four in a row

Nagoya Grampus, who currently lead Group G, faced Ratchaburi FC (Thailand) for the second time on Thursday 1 July. With KAKITANI Yoichiro marking a goal and an assist, the Nagoya side won the match 3-0 to claim their fourth consecutive victory in the group stage.

After winning 4-0 in the first leg against Ratchaburi on the 28th, Nagoya struggled against the Thai side who made six changes to their starting line-up. However, the Japanese club started to find their rhythm in the second half, breaking the deadlock in the 50th minute with MATEUS’ third goal of the competition. In efforts to add more layers to their offence, Nagoya introduced YAMASAKI Ryogo, SOMA Yuki, and YONEMOTO Takuji in the 60th minute.

With momentum on their side, Kakitani went onto score the team’s second goal in the 73rd minute, before assisting Yamasaki’s goal in the 79th minute, giving Nagoya a 3-0 victory.

As a result, Nagoya retain their group lead with four consecutive victories, with FC Pohang Steelers (Korea Republic) sitting in second place with nine points. Depending on the outcome of the other match, Nagoya could clinch the knockout stage with a win over Johor Darul Ta'zim (Malaysia) on 4 July.

Kakitani, who was involved in two goals, reflected on his team’s performance, “Our willingness to score goals overwhelmed our opponent’s defensive power.”

Nagoya’s coach Massimo FICCADENTI also commented, “All four matches have not been as easy as it looked from the outside, but our players showcased their resilience to earn positive results. We will give our best efforts to win the remaining two matches before we make our return to Japan.” 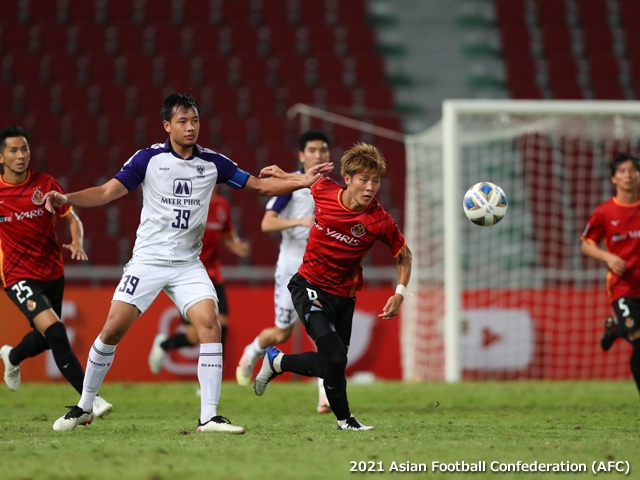 Following their 7-0 victory over Beijing FC (China PR) on the 29th, Kawasaki rotated six players from their starting line-up. OSHIMA Ryota started for the first time since returning from injury, as he worked the midfield with Tachibanada to orchestrate the offence.

The opening goal came in the 33rd minute, when TANIGUCHI Shogo redirected the corner-kick delivered by Oshima to allow Mitoma to score from the far side. Nine minutes later, Leandro DAMIAO assisted Oshima’s first goal of the season, giving the J.League champions a 2-0 lead at the break.

WAKIZAKA Yasuto and KURUMAYA Shintaro were introduced in the second half, allowing Taniguchi to step up into a more advanced role. With the change giving Kawasaki more offensive options, the team went onto a goal spree. After Damiao made it 3-0 in the 50th minute, Tachibanada scored three consecutive goals in the 56th, 65th, and 70th minute to give Kawasaki a commanding lead.

After Mitoma and Wakizaka added to the tally in the closing minutes, Kawasaki claimed their third consecutive victory in the group stage. On this day, Daegu FC (Korea Republic) won their match against Beijing 5-0 to stay within three points behind the group leader.

Tachibanada, who scored a hat-trick within a span of 15 minutes, reflected on the match, “I am always anticipating for my opportunities to score goals, so I am happy with this result.” But the rookie midfielder also commented, “However, I am not totally satisfied with my overall performance, so I still need to work on many aspects to improve myself.” 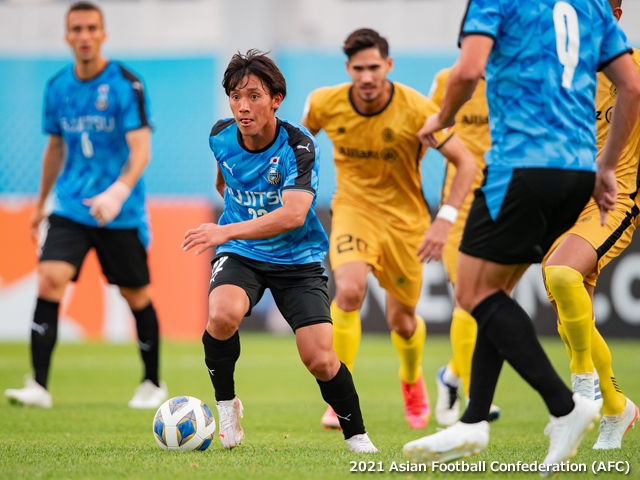 Levir CULPI, Coach (Cerezo Osaka)
Including the first half, I feel that we showcased a stronger performance out of the two teams. It would have been perfect if we managed to score the second goal, but the players worked extremely hard until the end. I normally stick with the same line-up in our league matches, but with the team in line to play matches every three days, I have made my decision based on the players’ conditions and formed a line-up that can bring the best out of the players. Some of the players have not played in our recent matches, so they might have lacked game intuition, but they showcased their strong determination to score goals and win the match.

MF SAKAMOTO Tatsuhiro (Cerezo Osaka)
Although we were able to create close opportunities while our opponent played aggressively, we struggled to create chances after we gave up the lead, as our opponent dropped deep in their territory to lay a block. Before entering the match, I spoke with Kiyotake to keep a close distance with each other to initiate our offence, and I feel like we were able to do just that. We struggled dearly against the opponent’s offence, as they consisted of players with great physical strengths and technique. It would have been great if we were able to score one more goal after scoring the equaliser, so that is an aspect we must improve on.