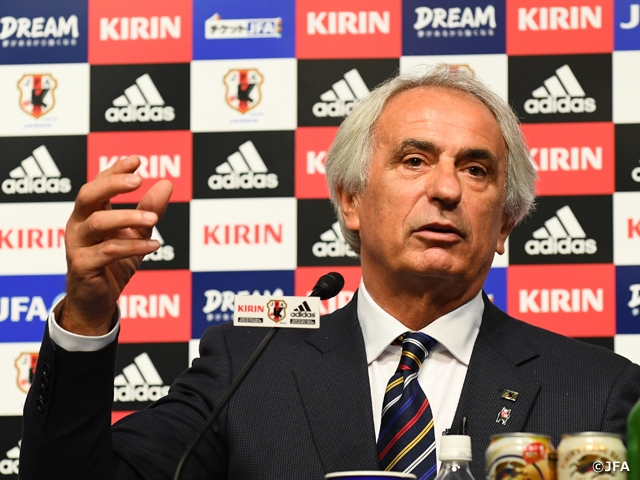 On Thursday 25 August, Vahid HALILHODZIC, the coach of SAMURAI BLUE (the Japan National Team), announced the 24 players who will play the two games of the 2018 FIFA World Cup Asian Qualifiers in September. He noted enthusiastically, “we’ll face this with a strong spirit and the courage to win through the final qualifying round."

Japan will meet the United Arab Emirates on Thursday 1 September at Saitama Stadium 2002 and will play against Thailand on Tuesday 6 September in Bangkok.

Also joining the team will be midfielder OHSHIMA Ryota (Kawasaki Frontale) and forward ASANO Takuma (Arsenal FC), both of whom played in the Rio de Janeiro Olympics recently, as well as forward KOBAYASHI Yu (Kawasaki Frontale), who scored in seven consecutive games in the J.League.

Coach HALILHODZIC expressed his expectations for the young players, “I called both Asano and Ohshima for the Kirin Cup. Watching the Olympic matches, I decided to include them to compete for the final qualifiers. I believe there is a strong possibility that they will lead the Japan National Team in the future.”

The coach also cited the immature behaviour of forward KANAZAKI Mu (Kashima Antlers) when he was substituted off for his club as a reason why he was excluded from the team. Then, he noted, “I’d like to be clear to all the players. I will not select any player with that kind of attitude for the national team. Think about whether young players can look up to you.”

Although Japan rank 49th in the FIFA World Ranking, while the UAE rank 74th and Thailand 120th, Japan lost to the UAE in the quarterfinal of the Asian Cup in 2015.

Coach HALILHODZIC futher commented, “there are tough matches ahead of us. The UAE have excellent players and they have been attending a training camp for two months. Japan must face the match with much stronger determination than simply avenging the loss at the Asian Cup.” He also warned the players to stay focused, “small details can decide a game in the World Cup final qualifiers. Stop thinking ‘Japan will be ok.’ It will leave ourselves vulnerable.”

Coach HALILHODZIC also showed an up-to-date analysis of the players in the Japan National Team since he took the role. He expects it to be used as a guideline for improving defence, offence, mentality and physicality, as well as everyday life management of each player. He implied that the team will use it in the training camp this time to strengthen the players.

The team will meet up on Sunday 28 August and start practice sessions in preparation for their first game against the UAE in Saitama.

In the final Asian Qualifiers, which will last until September next year, 12 teams that went through to the final qualifying round will be divided into two groups to play in a double round-robin tournament – home and away game. Japan will meet Iraq, Australia and Saudi Arabia, as well as the UAE and Thailand. The top two teams in each group will book a place. The winner of the game between the third-placed teams in each group will play against the fourth-placed team from the Confederation of North, Central American and Caribbean Association Football (CONCACAF) to earn the last spot. 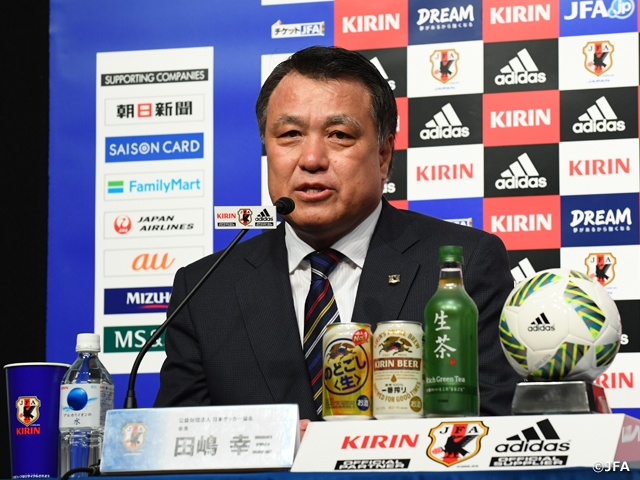 Vahid HALILHODZIC, Coach of SAMURAI BLUE (Japan National Team)
There are tough matches ahead of us. Three of the teams in our group, namely the UAE, Iraq and Australia, reached the semi-finals of the AFC Asian Cup last year. The first match is always difficult. The UAE National Team have been practicing for the past two months. They have several excellent players, some of whom played in the semi-final of the 2009 FIFA U-20 World Cup. Thailand are also performing well in domestic games. Since the quality of Asian football is rising, I want the players to stop thinking ‘Japan will be ok.’ It will leave ourselves vulnerable.

Our opponents are strong and anything can happen. We need to train appropriately and raise the level of our preparation for the final qualifiers. We have some difficulties – dealing with injuries, struggling to start games in their respective teams abroad, or joining our training camp late. However, we’re determined to get through the qualifying round.

Small details can decide a game in the World Cup final qualifiers. Making accurate predictions will be the key. Injuries can also be an important factor. Furthermore, when playing in Thailand, the players may suffer from digestive problems or catch a cold due to the high-temperature and humidity. So, I cannot reiterate the importance of making appropriate predictions and preparing ourselves for everything (even for the worst). As I’m intending to develop the youth (for the World Cup) in this qualifier, I’ll select eligible young players for the national team. I expect club teams to use young players more in their league matches, bearing in mind my intentions.

Just like when the Japan men’s 4x100 metres in the Olympics won silver, I want the players to be confident, knowing that we can achieve anything if we approach systematically (believing in our organization). The World Cup final qualifying round is a ‘big project’ and we all need to come together to get through it. Encouragements and supports from all over Japan are important. Taking all of us to Russia is my goal. We will strive to come out on top of it.

TASHIMA Kohzo, the President of the Japan Football Association
The Final Asian Qualifiers for the 2018 FIFA World Cup, which we have been our primary focus this year, will start in September. We cannot get through until the end of the final qualifiers next year without playing at full stretch from the beginning with the strong determination to book a place in the World Cup. We, the JFA, will do everything to support the team.