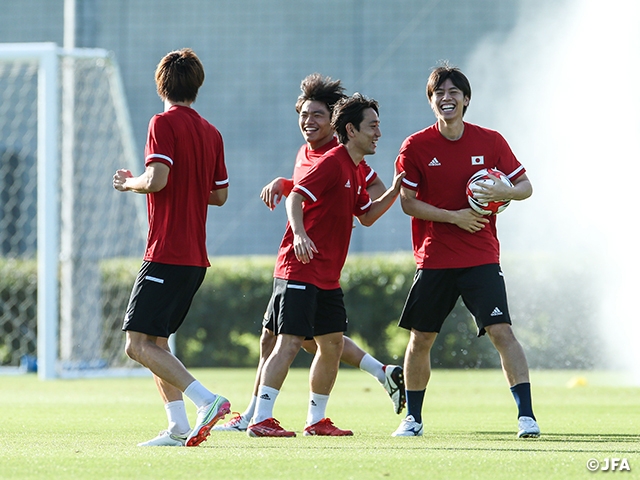 The Games of the XXXII Olympiad (Tokyo 2020) men's football tournament, which started on Thursday 22 July, is coming down to its final two matches, as the final and bronze medal match are about to take place. One day ahead of the bronze medal match against the U-24 Mexico National Team, the U-24 Japan National Team held their final training session on Thursday 5 August.

Ahead of their final match of the tournament, coach MORIYASU Hajime appeared in a press conference to share his aspiration, “Mexico has won the Olympic gold medal before, and they are one of the top teams in the world. We are expecting a tough match, but we will fight with strong determination to win the medal.”

The decision came in 2013 that Tokyo was going to host the Summer Olympics in 2020. Since then, the players born after 1997 were dubbed as the “Tokyo generations” throughout their development years. TANAKA Ao (Fortuna Dusseldorf), who made his first call-up to the team at the 2019 Toulon Tournament, shared his thoughts at the press conference, “Since it was determined that the Olympics was going to be held in Tokyo, many people supported the team to make us stronger and because of all of their help, we are now here competing for the medal. That is why this is not our fight. It is a fight for the entire Japanese football community and for Japan. We can give back to all the people who supported us by winning the medal.”

It has been four years since coach Moriyasu and coach YOKOUCHI Akinobu launched the Tokyo Olympic team in December 2017. The team consists of players who played for the national team at each age category, those with no international experience but thrived at the J.League and Universiade, and with ages ranging from those born in 1997 all the way up to 2000. YOSHIDA Maya (U.C. Sampdoria), who joined the team as an over-age player in June, commented, “They are good teammates and rivals at the same time, creating a great balance at each position. I would also like to finish this tournament on a high note.” Another over-age player, ENDO Wataru (VfB Stuttgart), also shared his thoughts, “This is a great team, and I understand that they want to play longer as a team. I went through the same emotions back then. That is why the over-age players have the responsibility to guide them and respond to their expectations.”

The bronze medal match between the U-24 Japan National Team and U-24 Mexico National Team will kick-off at 18:00 on Friday 6 August at Saitama Stadium 2002. 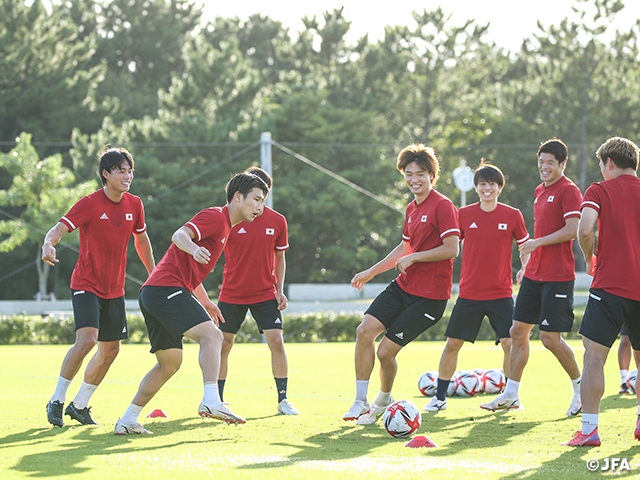 MORIYASU Hajime, Coach of U-24 Japan National Team
We will fight as a team with strong determination to win the medal. Mexico is one of the top teams in the world. We are expecting a tough match, but I want our players to continue to showcase a tenacious performance, strive to make strong individual efforts, and leave everything on the pitch. The bronze medal match will take place on 6 August, which is the day Hiroshima became the first city in the world affected by the atomic bomb. Countless lives were lost, and many are still living with deep scars left in their hearts. The Olympic games is known as the festival of peace. It is because of peace that we can engage in sports in this way, so it gives us a great opportunity to think about peace.

GK #12 TANI Kosei (Shonan Bellmare)
Of course it is very disappointing. However, we must accept the result and try to reflect on our performance after our next match. We are able to reset our mindset because there are players who experienced finishing in fourth place at the London Olympics. Mexico will certainly be prepared to exploit our weaknesses. It’s always hard to face the same team twice in a tournament and I am sure we will face many difficulties, but I am confident that we can stay competitive as long as we can make the necessary adjustments on the pitch. This will be our sixth match playing in two day rests, so I am totally exhausted, but I want to be the one leading the team to victory at the end. I know that everybody is motivated for this match, so we hope to utilise that motivation to earn a positive result.

DF #5 YOSHIDA Maya (U.C. Sampdoria/Italy)
Mexico is not the type of team that would back down easily, so we are expecting an intense match. Our mental strengths will be tested in this match. As a professional footballer, we are always asked to win matches, and in order to survive, there is no choice but to produce results. The opportunity to win a medal is right in front of us. These players are fortunate to be in position to represent their own country in their early 20s. We must take pride and responsibility to be given the opportunity to have a profession that only a handful of people can experience.

MF #13 HATATE Reo (Kawasaki Frontale)
When the team was first launched, I had no idea what to expect, and it wasn't until this year that the Olympics became a realistic goal. However, as we carried on with the team activities, I had a lot of fun playing with and against high-level players. I feel so fortunate to be given this opportunity to meet so many people and play football with them, so I hope to express my gratitude on the pitch. It is something I will regret for the rest of my life if I don’t do it. (Yoshida) Maya-san mentioned that there is a big difference between an Olympian and a medallist. Those words left a strong impression on me, and this bronze medal match is certainly the junction between the two, so I will do my best to keep my composure in the match. We saw the footage of the bronze medal match at the London Olympics, but the players looked devastated when they finished without a medal, so I will take Maya-san’s words and the match footage to my heart when we enter the bronze medal match.

FW #9 MAEDA Daizen (Yokohama F.Marinos)
It is hard to move on from that loss, but we are doing our best to reset our minds towards the bronze medal match. This will be the final match for this team. The players are very close to each other, and we like to fool around off the pitch, but once we step on the pitch, we are capable of turning the switch on to focus on our trainings. I really want to win this match. There is a big difference between winning a medal and finishing fourth. At the end, I think it will come down to who wants it more. Everyone on this team is determined to win, so we hope we can finish this tournament on a high note. 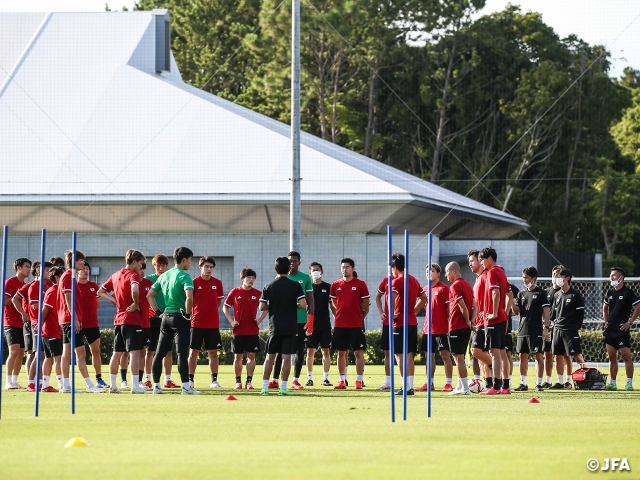