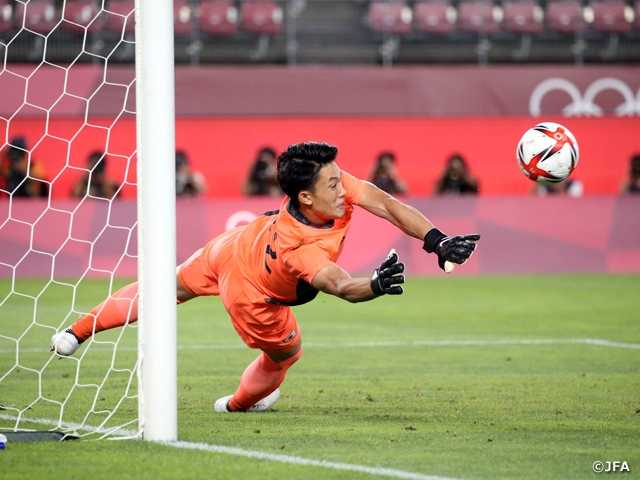 The quarterfinals of the Games of the XXXII Olympiad (Tokyo 2020) men's football tournament took place on Saturday 31 July. At Ibaraki Kashima Stadium, the U-24 Japan National Team faced the U-24 New Zealand National Team.

In their first match of the knockout stage, Japan named HAYASHI Daichi (Sagan Tosu) as the lone striker, with SOMA Yuki (Nagoya Grampus) starting as the left midfielder. HASHIOKA Daiki (Sint-Truidense V.V.) also started as the right full-back to replace SAKAI Hiroki (Urawa Red Diamonds) who is suspended for the match. New Zealand on the other hand started with a 5-3-2 formation, which TOMIYASU Takehiro (Bologna FC 1909) later reflected, “We were anticipating for a one-top formation, so it was unexpected.” 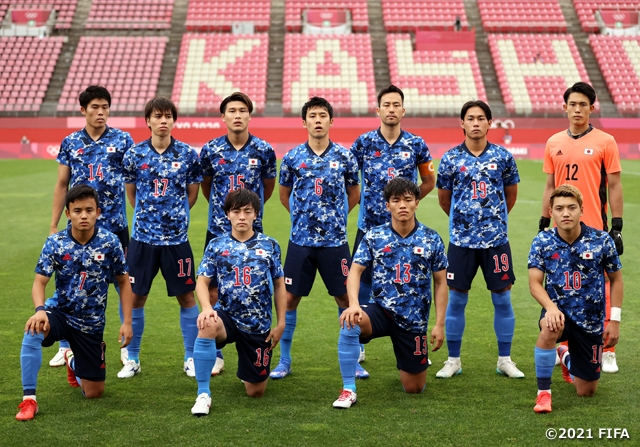 The three New Zealand midfielders kept a close eye on the Japanese attackers, containing them from building up the offence, as ENDO Wataru (VfB Stuttgart) described, “They were playing almost man-to-man.”

With the opponent locking down the central area, Japan started to change their point of attacks by utilising their full-backs. In the 10th minute, a golden opportunity was created from a short corner kick, but the shot taken by Endo failed to capture the goal. KUBO Takefusa (Real Madrid) and DOAN Ritsu (PSV Eindhoven) combined to create a chance in the 31st minute, followed by another play made by Soma and Doan, but both attempts fell short from finding the net. 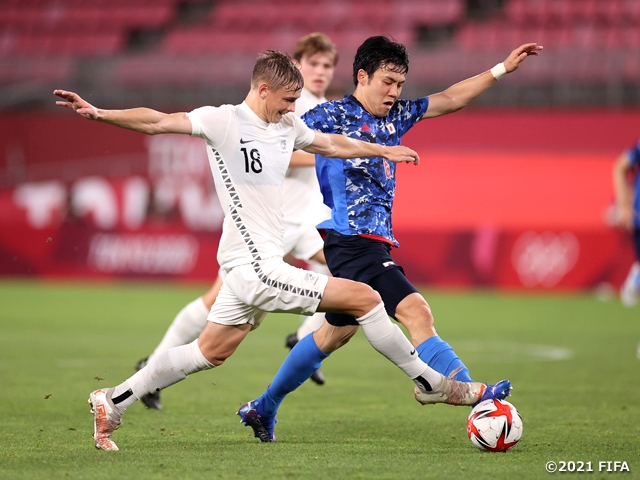 While Japan continued to struggle to find their rhythm in the second half, New Zealand made a player change in the 51st minute to shift their system to a 4-3-1-2 formation, creating more opportunities to threaten the Japanese goal. Japan’s best chance of the second half came in the 82nd minute, when UEDA Ayase (Kashima Antlers) connected with Doan’s cross, but his shot went straight at the opposing goalkeeper Michael WOUD.

The match went into overtime, and despite facing some tough stints, Japan managed to keep the clean sheet to send the match into penalty shoot-out, as Tomiyasu mentioned, “We knew this was going to be a tough match, but we never gave away the initiative.” 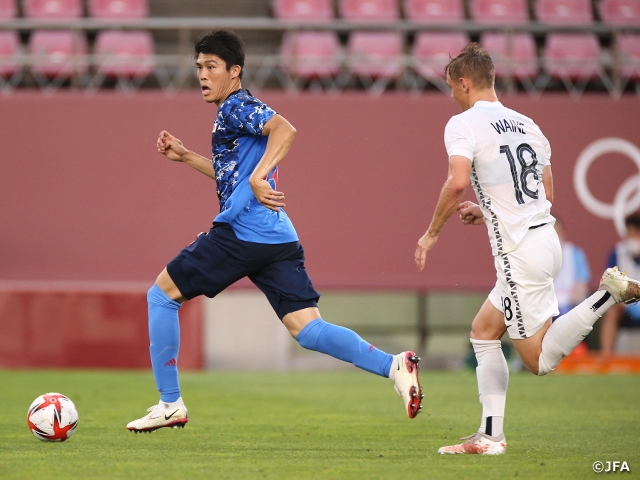 At the penalty shoot-out, Japanese goalkeeper TANI Kosei (Shonan Bellmare) followed the advice of GK coach KAWAGUCHI Yoshikatsu, to “Believe in your instinct,” and stopped the shot of New Zealand’s second spot taker Liberato CACACE. While New Zealand failed to convert their second and third spot-kicks, Japan converted all four to advance to the semi-finals.

Following the match, coach MORIYASU Hajime praised his players, “Each player courageously volunteered to take the spot-kicks. Their courage and determination brought us this victory.” The Japanese coach continued to mention, “The players showcased their resilience in this match.” 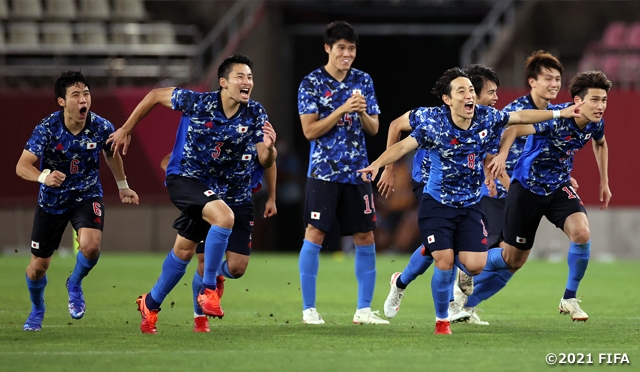 With this victory, Japan has reached the Olympic semi-finals for the first time since the 2012 London Olympics. They will now face Spain on Tuesday 3 August at Saitama Stadium.

MORIYASU Hajime, Coach of U-24 Japan National Team
The players worked hard to keep a clean sheet and showcased their determination to earn results at the Olympics. Winning is the most important thing, so I am proud of my players’ efforts. In terms of our performance, it was great that we were able to keep a clean sheet, but obviously, it would have been better if we managed to score goals to win the match. However, we knew entering the match that New Zealand was going to be a tough opponent to score against. We hope to create opportunities to score goals in our next match against Spain.

GK #12 TANI Kosei (Shonan Bellmare)
Just as we expected, this match turned out to be a very tough match. Facing an opponent with many tall players, I did my best to win the high-balls and erase the opponent’s strong point. At the penalty shootout, I focused on keeping my foot on the line and stuck with my instinct. When I made that save, my read and timing was perfect.

DF #5 YOSHIDA Maya (U.C. Sampdoria/Italy)
We really showcased our patience in this match. We knew heading into the match that it was going to be a tough one, and that our opponent wasn’t going to give up that easily. Some of you might have been expecting lots of goals, but there are matches like these too. It is extremely important that the defence maintain their composure in matches like these, to allow the offence to create opportunities. Tani has improved over the tournament and made great saves today.

DF #13 HATATE Reo (Kawasaki Frontale)
We faced a tough opponent who dropped deep in their own territory and showcased great teamwork. They were extremely strong in one-on-one situations. I was already out of the match when we entered the shoot-out, so I just told Tani that it was his time to become a hero and I was just praying from the side-line. Tani proved his talent by making a fantastic save. I wasn’t able to capitalise on my chances today, so I hope to do a better job next time.

DF #14 TOMIYASU Takehiro (Bologna FC 1909/Italy)
We knew this was going to be a tough match. It is impossible to dominate the entire match, so we knew there will be times where are patience will be tested. We also knew that New Zealand was not going to give-up too easily, so we were determined to fight through until the very end. Before entering the shoot-out, I told Tani that we believe in him and that his instinct is spot on today.

MF #6 ENDO Wataru (VfB Stuttgart/Germany)
Today there was a play I had to convert, and the team also failed to capitalise on many opportunities. After seeing our offence doing most of the heavy lifting during the group stage, I was thinking that it was our turn to showcase our patience today. While our opponent showcased a persistent fight, we were able to keep our composure and prevail in the penalty shoot-out.