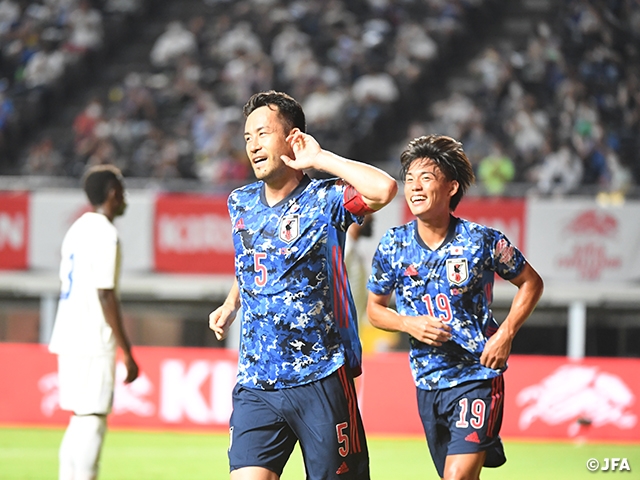 On Monday 12 July, the U-24 Japan National Team faced the U-24 Honduras National Team in the KIRIN CHALLENGE CUP 2021 held at YODOKO SAKURA STADIUM (Osaka), where they earned a 3-1 victory thanks to the opener scored by YOSHIDA Maya (U.C. Sampdoria) and the brace of DOAN Ritsu (PSV Eindhoven). 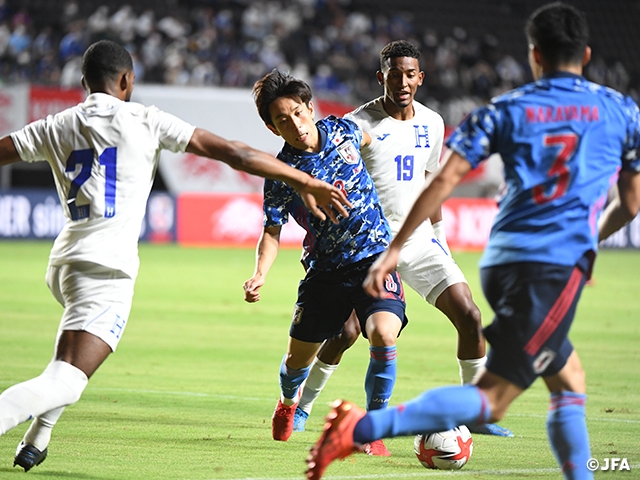 It was Japan who took the initiative in this match, as they showcased their dominance in both offence and defence. The home side effectively utilised the width of the field to build their offence. The opener came in the 13th minute, when Yoshida connected with an in-swinging free kick delivered by Kubo.

With momentum on their side, Japan continued to apply pressure. In the 40th minute, Hayashi superbly redirected a cross to set up a shot for Doan, who slotted the ball into the net using his right foot. Following the match, Doan reflected on this play, “I had been working to improve the quality of my right footed plays, so that goal was huge.”

After displaying a strong performance in the first half, Japan started to show signs of fatigue in the second half, which allowed the Honduran side to gain momentum and cut their deficit in half with an own-goal in the 65th minute.

Despite the late struggles, the Japanese players showcased tenacious efforts to keep the lead, and with Doan converting the cross of SOMA Yuki in the 85th minute, Japan managed to walk away with a 3-1 victory in a match dubbed as a simulation of their group stage match against Mexico.

Following the match, coach Moriyasu commented, “We were able to create many opportunities in the first half while managing the risks in defence.” The coach continued to mention, “In terms of our endurance, we were able to make a forward progress ahead of the Olympics. Through these tough competitions, I hope our players are honing up their determination to fight through the Olympics.”

The U-24 Japan National Team are scheduled for one more training match ahead of their first group stage match against South Africa on the 22nd. The team will make the most out of the remaining time to prepare themselves for their match against the U-24 Spain National Team on the 17th.

MORIYASU Hajime, Coach of U-24 Japan National Team
We are grateful to be given this opportunity to face a strong opponent like the U-24 Honduras National Team, who is also preparing ahead of the Olympics, at the KIRIN CHALLENGE CUP 2021. We gained a lot of energy from all of our fans, including those who attended the stadium, watched at home, and all the support we gained through the media. We thank you for all of your support.

DF #5 YOSHIDA Maya (U.C. Sampdoria/Italy)
We played well in the first half, but we had to score the third goal earlier in the second half. There were chances that were spoiled in the first half as well, which could have changed the whole dynamics of the match if we were able to convert them. We allowed our opponent to gain momentum after conceding a goal from a 2-0 lead. It was something we spoke during halftime, so it is regretful that we still conceded that goal in the second half.

DF #14 TOMIYASU Takehiro (Bologna FC 1909/Italy)
In the second half, we committed too many mistakes, failed to connect our passes after winning the ball, and allowed our opponent to dominate the match. We created a lot of good opportunities by passing the ball upfront in the first half, but those passes were being intercepted in the second half, which allowed our opponent to initiate more counterattacks. I feel that we needed to be more patient and use the defensive midfielders more often. We also had to use the spaces in the flanks to keep the ball moving in our opponent’s territory. 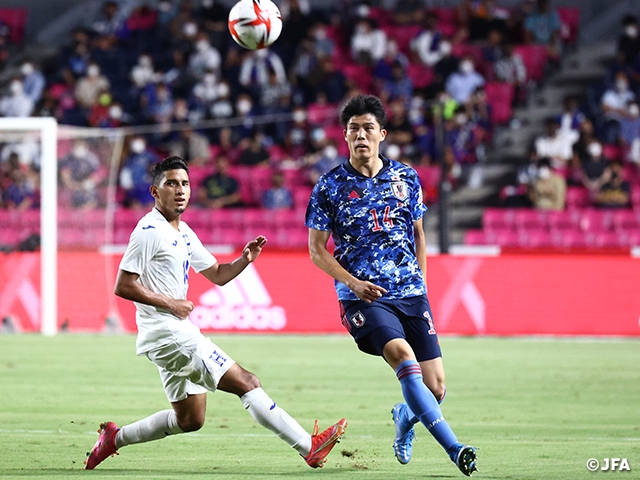 MF #8 MIYOSHI Koji (Royal Antwerp FC/Belgium)
In the first half, we managed to initiate fast breaks by applying pressure from the frontline, while also creating opportunities from our build-up plays. It was also great that we managed to score two goals in the first half. However, it was evident that we were running out of gas in the second half. We conceded a goal during a time period where we had to control the game, so that is an aspect we must improve ahead of our next match.

MF #10 DOAN Ritsu (PSV Eindhoven/Netherlands)
I am glad that I was able to play the entire 90 minutes today. The fact that I was able to push myself to score that second goal in the 80th minute was a sign of improvement. I was starting to feel fatigued in the closing minutes, so that goal gave me confidence that I can fight through the entire 90 minutes. 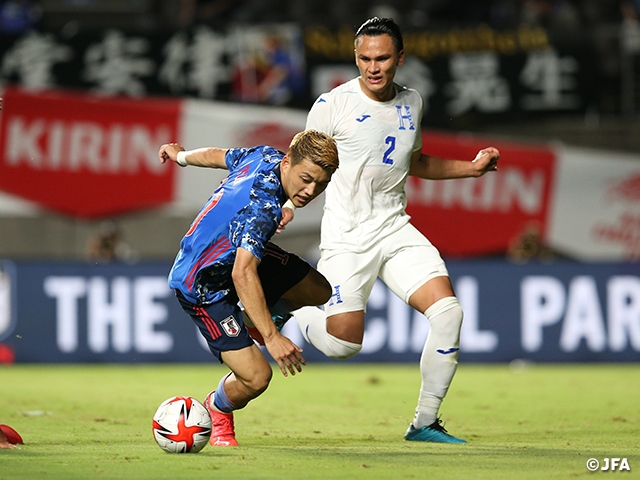 FW #19 HAYASHI Daichi (Sagan Tosu)
As a forward, I really wanted to score a goal today. My teammates are skilled enough that even if I play a bit selfishly or make my runs a bit early, they can still deliver the ball to me. I want to contend as a striker, so I need to be able to capitalise on the given opportunities. I am determined to score goals in our next match.