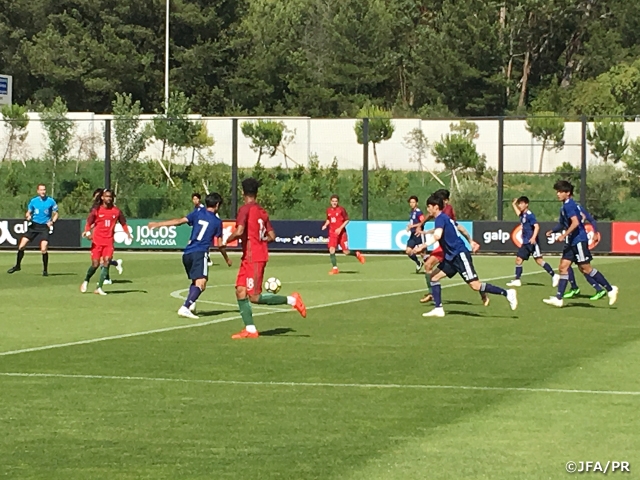 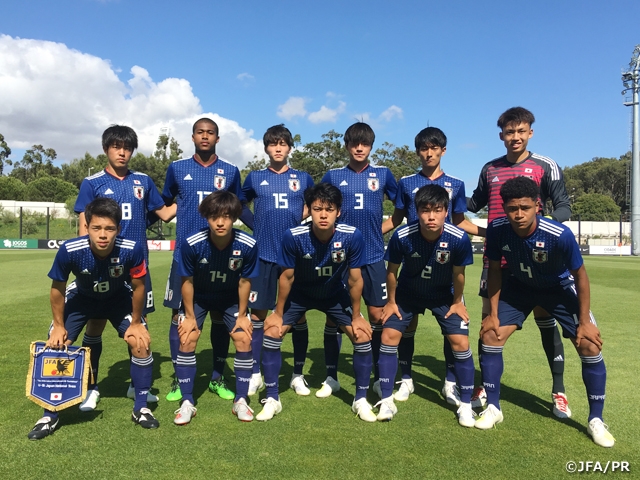 On Sunday 9 June, the U-18 Japan National Team played their first match of the 25th Lisbon International Tournament U18 against the host nation, the U-18 Portugal National Team. Ahead of the match, acting coach TOGASHI Koichi reminded his players of the team concept and sent the players off by demanding them to perform based on their concept.

From the beginning of the match, Japan showcased quick pressure in defence while taking a collective approach to limit the pass range for the opponents. With their defence showing its effectiveness, Japan got off to a smooth start. Portugal, on the other hand, saw Japan applying aggressive pressure from the front line and switched their approach to utilise the width of the field. Their change in tactics proved to be effective in the sixth minute, when they made a long switch to the left side before sending a diagonal ball towards the centre. The Portuguese attackers successfully penetrated the space behind the Japanese defence to capture the opening goal. Despite their positive start to the match, it was evident that Japan was deeply affected by this goal. While they showed signs of struggle to keep up with the opposing attackers, Japan also had difficulties creating anything in offence, as ODA Yutaro’s shot in the 30th minute was their first attempt at goal. In efforts to change the dynamics of the match, HARUYAMA Misaki was brought onto the pitch to replace OGURA Hinata in the 33rd minute. However, Japan conceded back-to-back goals in the 43rd and 45th minute to enter halftime with a three-goal deficit. 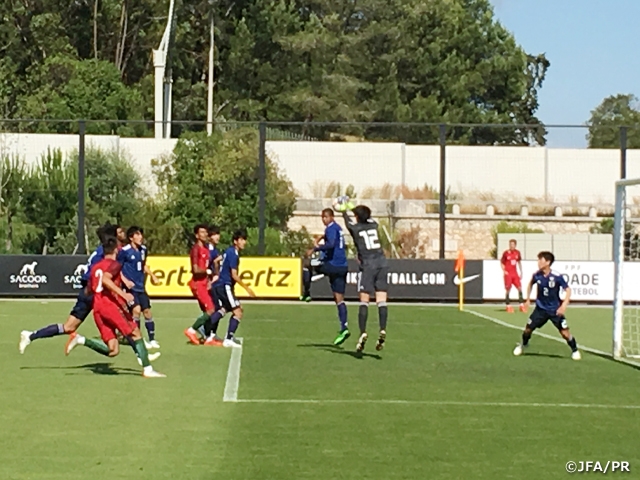 Japan continued to struggle against Portugal in the second half, as they made three more substitutions to break the rhythm of their opponents but fell short from creating any threats. The match ended with a final score of 0-3, giving the home side a sweeping victory to start off the tournament.

GK #12 MITSUI Daiki (Nagoya Grampus U-18)
In today’s match against Portugal, I wasn’t able to showcase my strengths at all and we were left with a very disappointing 0-3 loss. It reminded me that we need to showcase our very best performance in order to compete with opponents at this level, so we will learn from this experience to do better in our next match.

DF #2 MIHARA Shuma (Ehime FC U-18)
This was my first call-up to the national team and with this being my first international tournament, I was able to enter the match with a good amount of nervousness. I personally saw flaws in my response against the opponent’s dribbles and my timing to get myself involved in our attacks. As a team, I thought we need to communicate more and make adjustments on the pitch. We will work to improve ourselves ahead of the next match and fight as a team to earn a win.

MF #14 ISHIURA Taiga (Tokyo Verdy Youth)
Although I was given the opportunity to play on the pitch for the entire 90 minutes, I wasn’t able to score or assist any goals, so I am very disappointed in myself. I want to win the next match to prove that size doesn’t matter in this game.