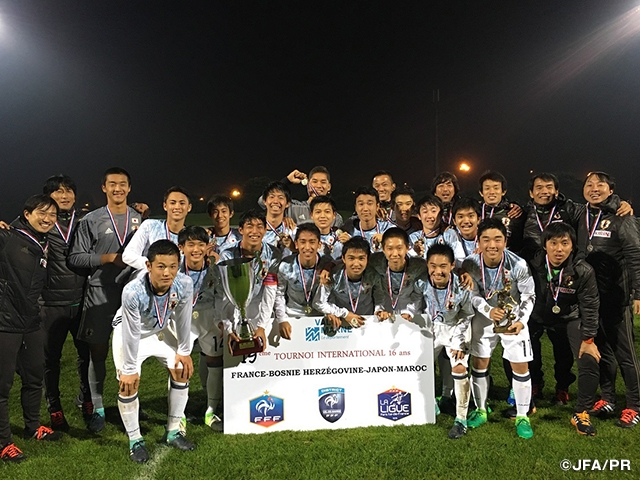 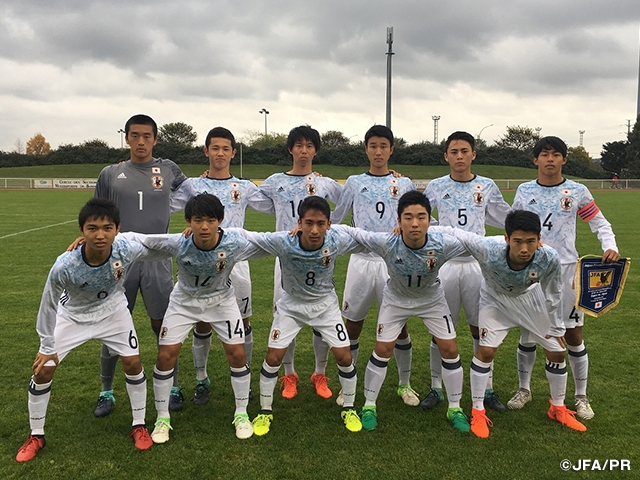 On Saturday 4 November, U-15 Japan National Team, also called “02 Japan”, faced U-15 France National Team in their third match of the Val-de-Marne U-16 International Friendly Tournament 2017, where the yound Japanese squad won the tournament for the first time by topping the group on points after drawing 1-1 with the hosts.

France have enjoyed a superb winning record of clinching the last seven straight titles and sealing a total of 14 championships at this tournament, and they are hosting the 19th competition this year. Furthermore, at the FIFA U-17 World Cup 2017, which took place in India last month, U-17 Japan were edged 2-1 by the French counterparts.

However, France needed to win the final game to claim this year's tournament title after drawing with Morocco in their second match, and they started off very strongly by taking advantage of their physicality and individual technical skills. Japan, on the other hand, looked for their own chances by feeding long balls into the open space behind French defenders, who were taking high positions to put pressure in midfield. In the 9th minute, forward AOKI Yusuke exploited the free area behind the backline and sent an early cross, which was met by forward TANAKA Zen. However, his effort hit the goalpost as well as being judged offside.

Thereafter, France used both flanks and sent acute vertical passes, while their threatening players in midfield took the ball up to the Japanese penalty area by carving open the defence with excellent dribbling skills. From a goalmouth scramble, the French team fired a shot at goal in the 14th minute, and another attempt was made on 20 minutes after they broke through the Japanese defence on the left and a quick cross was met by one their attacking player, but fortunately for Japan, a pair of shots missed the target.

The game stayed in the balance in the early part of first half as Japan matched the intensity on the ball by the French counterparts, but they struggled to keep possession and, as a consequence, were forced to push back their backline and defend in their own end. After giving away a free kick on the right and near the box in the 25th minute, France threatened Japan’s goal with a series of attacks by collecting the loose balls and sending quick crosses back inside the penalty area. A French player responded well and struck a promising shot at goal, but defender SUGAHARA Kazuma cleared his effort just before it went past the goal line to keep a clean sheet for the Japanese side. The menacing attacks from the young French internationals continued, but failed to find the Japanese net, before the first half ended scoreless. 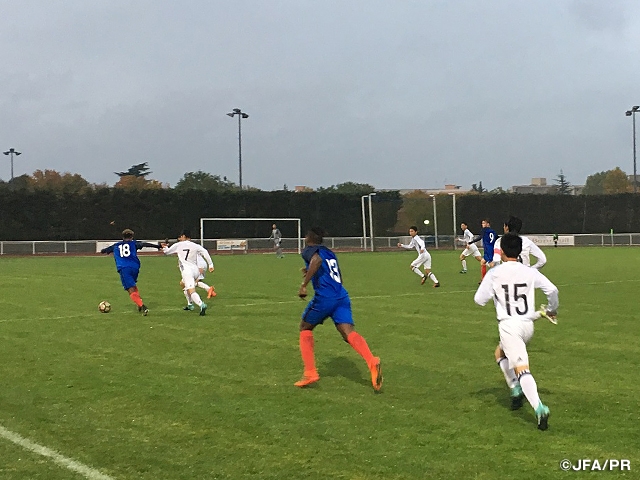 Even with heavier rain in the second half, France’s momentum did not show any sign of weakening. Japan focused on making quick transitions and kept the French players checked at all times, and patiently looked for their chanced to counterattack. In the 47th minute, Japan robbed the ball upfront and Aoki fired a shot, but his attempt, unfortunately for the Japanese side, struck the goalpost. The opponents then did not miss their scoring chance in the 53rd minute. After Japan conceded a free kick from a reckless foul, the French squad netted directly home the placed-kick delivery and scored the opening goal of the match.

Subsequently, Japan subbed in forward NAKANO Keita to equalise the match. In the 61st minute, Nakano aimed a free-kick directly to goal, but the opposing goalkeeper brilliantly denied his attempt. The Japanese squad continued to attack, while the French team tried to double their lead by taking advantage of their speed and scoring on the counter. After 72 minutes, France intercepted the ball in midfield and created a one-on-one chance with Japanese goalkeeper YAMADA Taiki, but denied by an excellent save by quickly getting in the line of shot and parrying away from danger.

An important moment of the game came in a few minutes later for the Japanese side, who waited patiently for their chances to score an equaliser. After a neat exchange of passes started all the way back from goalkeeper Yamada, defender HANDA Riku quickly delivered the ball forward to Nakano, who collected it and evaded the challenge of the opposing defence to send a through pass to Aoki. Then, the young Japanese striker scored a much-awaited goal to level the match by nutmegging the French goalkeeper.

Thereafter, the opponents repeatedly threatened Japan and looked for a go-ahead goal, but the Japanese defence led by Handa neutralised those menacing attacks and displayed strong character as well as the strength on the ball. The last ditch effort from the French team came in the 79th minute, but keeper Yamada denied his effort to force a 1-1 draw to the hosts. As a result, Japan became crowned champions for the first time after making their fourth appearance in the tournament with a overall record of 2 wins and 1 draw.

Despite having many first-time call-ups in the U-15 Japan squad for this tour, the team displayed outstanding unity and played superbly under their slogan ‘challenging and competing’. They will become the U-16 national team for Japan, when they compete in the next major competition, AFC U-16 Championships Malaysia 2018, which is scheduled to be held next year in September.

ARIMA Kenji, Coach (U-15 Japan National Team)
We couldn’t come up with a win against France who had won this tournament seven straight times, but it was still good that our players did not show any signs of fear and were able to win the championship at the end. It was a great experience to play against physically superior opponents Bosnia Herzegovina and Morocco as well as France with all three teams having different styles of play. I found it also important that we faced the opponents who took long strides when they moved up the pitch and, additionally, the pressure which we felt when they attacked were immense. These were some aspect of the game that we cannot normally experience in Japan.

For this tournament, we called up five first timers and tried to bring a larger group than usual. It was also significant for the team that we had a chance to find new talents as well as trying new positions for the existing players. After going through these matches, we have figured out the areas that we need to work on. The other positive takeaway that I must add is that we have improved greatly by sharing the same goal and jointly making the key decisions. As a result, they made significant improvements in their game with each match played in the tournament. The experience of winning this championship will be a great asset for these players. However, I expect them to improve even more on the plays that were effective during the tournament and, at the same time, work on their weaknesses once they return to Japan, and continue their hard work to further improve their game.

DF #4 HANDA Riku (Montedio Yamagata Youth)
It was a very important match with the championship at stake and we entered the game reminding ourselves of the team’s key word “challenge” during the tournament. In the first half, when we had the ball, we struggled to keep possession facing strong pressure from the opponents. We weren’t given the chance to challenge the opposing player individually. However, we did well not to allow any goals despite facing long stretches whereby the opponents had possession of the ball and we often got pushed back to defend in our own end.

In the second half, we did not display fear and challenged the opponents, and as we got used to facing their strong pressure, we had more confidence in our plays and, as a result, played with better ball movements. We started to create good scoring opportunities and got closer to their goal, but we failed to capitalise on those chances. When we were struggling to score a goal, we allowed them to score through a set-piece. However, we showed our strong determination towards winning, and that competitive spirit brought the match-tying goal. In this tournament, we had two difficult matches where we allowed the opening goal, but we learned that we can still come up with a good result if we never give up until the end. I will take advantage of these lessons learnt and not waste every single future practice session as well as keeping up the hard work to get reselected to the team for the next tour.

MF #7 YAMAUCHI Kakeru (Vissel Kobe U-18)
Winning the championship simply made me happy, but not being able to win the match was disappointing. The atmosphere of the stadium and the opponents’ pressure were overwhelming, and they took the pace in the first half. But in the second, they started to slow down and we took the initiative and tied the match. This I view it as a positive takeaway for the team. However, I must add that we should be able to play this effective style of play from the beginning rather than from the second half.

Personally, I wasn’t able to show my strength in making good off-the-movements to receive effective passes or taking the ball up by myself. These are some of the areas that I will be reminded when I practise in order to execute better plays under pressure in the future. The team won the title, but I did not achieve what I had intended in the tournament. I will take advantage of this experience and keep up my hard work and improve what I can do personally as well as what we can do as a team to beat France when we meet them the next time.

FW #10 NAKANO Keita (Kyoto Sanga F.C. U-15)
It was an important match with the title at stake. Almost all the fans in the stands were supporting France and we played in an overwhelmingly away environment. But no one expressed fear and played through the full 80 minutes. We allowed the opponents to score the opening goal, but kept our chin up and fought hard with a positive attitude. That brought us the equaliser, but couldn’t score the go-ahead goal to achieve one of our goals of winning against France.

French players were physically strong and overwhelmed us when they came to rob the ball by taking long strides and approached us. Sometimes, they reached out and got to the ball from where we can’t even imagine playing in Japan and we ended up losing possession several times. I will continue my training in Japan keeping that experience in my mind. By the time the next time when we play against France, I think they will be a better team as well. I want to win the next encounter by taking advantage of this experience.

FW #11 AOKI Yusuke (FC Tokyo U-15 Fukagawa)
Today’s match was very difficult. The French team had the fiercest intensity on the ball and the best individual skills out of all the opponents that the Japanese U-15 squad had played against in the past. But I think we didn’t panic and played calmly instead. It was disappointing that we had few scoring chances that we could not convert, but it was still good that we scored one back and tied the match. During this trip, I found many things that I was lacking or areas that I need to improve on. I will keep practising and become mentally and physically stronger before the next national team tour, and eventually return here and play well against France.