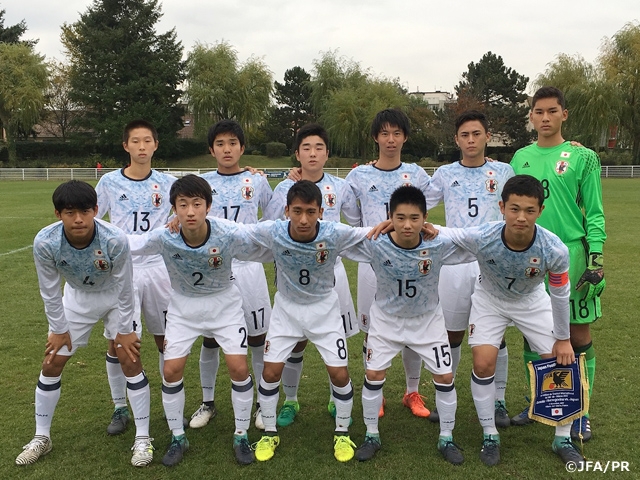 U-15 Japan National Team took on Bosnia and Herzegovina on Thursday 2 November in the Val-de-Marne U-16 International Friendly Tournament 2017 and came out with a 2-0 victory to record second consecutive win in the tourney.

U-15 Bosnia and Herzegovina National Team, who were defeated in their first contest by France, put strong pressure against Japan from beginning of the match by taking advantage of their physicality. On the other hand, Japan looked for their scoring opportunities by composedly moving the ball and aiming at the space behind the opposing tall defenders. In the 22th minute, Japan fashioned a promising chance after forward AOKI Yusuke collected the ball in the middle and midfielder AOSHIMA Kenta attempt a shot from the left, but his effort missed the target. Japan finally broke through the opponents’ stellar defence in the 27th minute, when defender HANDA Riku sneaked up the right flank and sent a fast grounder pass into the middle, and onrushing forward TOYAMA Shoji tapped in brilliantly for the opening goal.

After 33 minutes, Toyama nearly scored a brace after he got past three defenders with outstanding dribbling skill and struck a shot at goal. However, this time the opposing goalkeeper denied his attempt to double the lead. Japan’s defence was solid as Handa and defender SUZUKI Kaito dealt with the opponents’ counter-attacks with poise and did not allow them to fashion scoring chances. Just moments before the end of the first half, a penalty kick was awarded to Japan in the 40th minute for hand ball in front of their goal, which was converted by Aoki to give his side a 2-0 lead at halftime. 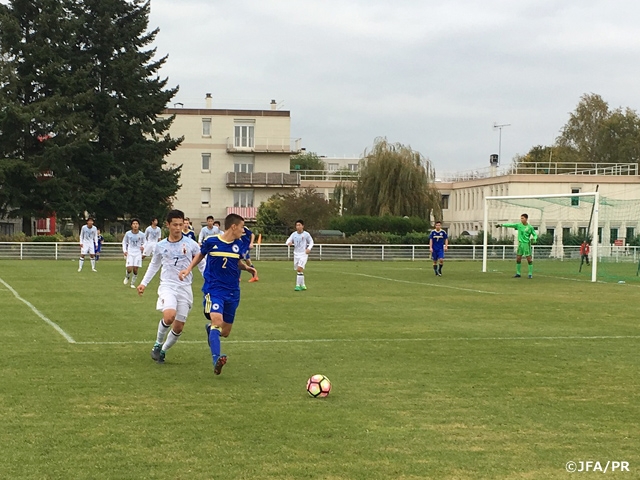 In the second half, Japan came out strongly and tried to score additional goals. In the 44th minute, midfielder MITO Shunsuke ran up on the right flank and send in a neat cross, but Aoki’s effort was saved by the Bosnian goalkeeper. While the opponents had placed defenders in front of goal and looked for their chance to hit on the counter, Japan struggled to finish their attacking plays with effective shots. Even substitutions did not change the course of the action, as they dominated ball possession, but their passes were off target and yielded no end product.

On the other hand, Bosnia and Herzegovina earned a free-kick from a counter-attack in the 67th minute, but Japan’s goalkeeper NOZAWA Taishi Brandon stopped the fierce strike with a fine save. In the 70th minute, the opposing goalkeeper also denied a header by Japan’s forward NAKANO Keita off midfielder TOMIZU Riki’s cross. The scoring remained unchanged until the final whistle and Japan came out on top of the contest with a 2-0 score. After two straight wins, Japan will now face hosts U-15 France on Saturday 4 who drew with Morocco 1-1 in their last fixture. 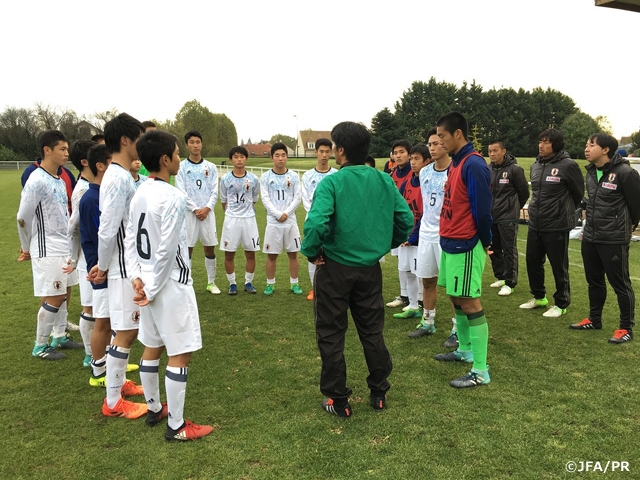 GK #18 NOZAWA Taishi Brandon (FC Ryukyu U-15)
We won the match today, but the details of it weren’t as good as the result. In the second half, we held the ball too long and were not able to break down the opponents, who stayed back and defended. Even such is the case, our risk management to neutralise the opponents’ counter-attacks worked well. We dealt them with good defensive combination and prediction and prevented them from exploiting the space behind the backline and creating good scoring chances. It’s more important than anything else for me as a goalkeeper to keep a clean sheet. When I get hold of the ball, I want to make quicker decisions and swiftly send it to my teammates to give them more time to handle the ball. As a team, we found many things that we need to work on from playing the previous two matches. But, at the same time, we also found a way to win and piled up the points. In order not to waste these efforts, we will continue to do our job well in the next match against France. Furthermore, we will try to outplay the opponents as a team in both the scoring and the overall performance, and aim at winning the title as well.

DF #16 SUZUKI Kaito (Jubilo Iwata U-15)
We were discussing to put pressure on the opponents from the beginning of this match and take the initiative. We did just that and started off the match well. Their defensive line was high and there was some open space behind them and on both flanks, and we were able to create few chances there. However, just sending simple passes upfront was not enough to score. We scored the first and second goals today by effectively finding the open player after receiving a pass and creating time for the defensive midfielders to go up as well as our flanks feeding good cross balls.

We knew France beat Bosnia Herzegovina 5-0, so we entered the second half to win with a larger goal difference. We didn’t rush and tried to do the little things right, but ended up moving the ball without really threatening the opponents. Nobody took the initiative, which left us with some assignments before the coming match. I have more experience than others including the AFC U-16 Championship 2018 Qualifiers, and I should to be the one, who takes on the responsibility, and lead the team. The last match is against hosts France and I think they are the toughest opponents during our trip. We will challenge the things we failed to do in today’s match and make the necessary adjustments to claim the title.

MF #15 MITO Shunsuke (JFA Academy Fukushima U-15)
The playing style of the opponents was to stay back and look for chances to score off counter-attacks even after conceding a goal. In the first half, we attacked the space behind them and created good rhythm by all of us getting involved with the ball. But in the second half, we couldn’t change the rhythm of our plays and score.

This was the first time that I played for the current U-15 national team and I was placed at right full-back. I felt that I needed to draw the opposing central defenders and attack the space behind them as well as breaking through the defence while attacking with pace. For the next match, we will have a better idea of each other’s strength and, personally, I will be looking to touch the ball more often to score goals.

FW #13 TOYAMA Shoji (Gamba Osaka Junior Youth)
Partly because the opponents lost their first match, they stayed back and defended. We had a hard time creating our rhythm or playing to our strength in our attacking plays, which intended to exploit the space behind the defenders and feed good balls to the forward players to create many scoring chances as the team. Gradually, we started to move the ball well and got some chances, but we are still not doing a good job in terms of our shooting accuracy or direct plays to get past the opponents. We want to correct those before the next match.

Speaking about our defence, we had a long stretch of playing in the opponents’ end, and our defenders and goalkeeper did a good job of managing the risks which prevented the opponents from playing freely. This is something that we would like continue doing so as well. I had few occasions where I displayed my strength of dribbling with pace, but I don’t think that I put enough pressure on the opposing defence as well. In the last match against France, we will try to make better offensive and defensive transitions to win the championship together as a team.