With two days to go before the first match of the "Final Asian Qualifiers (Road to Russia)" against the United Arab Emirates (UAE), SAMURAI BLUE (the Japan National Team), who aim to book a place in the 2018 FIFA World Cup, held a closed session to go through tactics on Tuesday 30 August in Saitama.

On the third day of their training camp, the players, who were late coming back to Japan due to their respective clubs’ schedules, namely midfielder KIYOTAKE Hiroshi (Sevilla FC/Spain) and midfielder HARAGUCHI Genki (Hertha BSC Berlin/Germany), joined the team. All 24 players had finally got together.

The team held a session, which was closed apart from the first 15 minutes. The players started by running and then spent time on going through tactics in offence and defence in a practice match.

Kiyotake commented with satisfaction after joining the team: “we had a good practice session. I’d like to get back into good condition again as soon as possible, so that I can prepare well for the match. As I’ve been on the pitch since the beginning of this season for my club, I’m in prime form. So I hope to bring this positive momentum to the national team.”

Haraguchi noted with enthusiasm: “since I’ve been focusing on scoring, I’d like to show my intention here.”

As for the UAE, they arrived in Japan from their training camp in China in the afternoon.

The UAE, who aim to earn a place in the FIFA World Cup for the first time since 1990, ranked second after Saudi Arabia in the second round of the Asian Qualifiers. The team ended in the top four among the second-placed teams to reach the final round.

Then the team held training camps in Spain and China in preparation for the opening match of the final round. In preparing to meet Japan, they played an international friendly against Korea DPR and lost to them 0-2 in Shanghai on Wednesday 24 August.

Forward USAMI Takashi (FC Augsburg/Germany) looked back to the difficulties in the game against Oman in the final qualifying round in 2014: “away matches can differ significantly depending on the location. As we do feel pressured even playing in Japan, I guess either game is difficult. Having said that, I’d like to experience that toughness, and the team can improve even more by going through these difficulties.”

The match between Japan and the UAE will kick off at 19:35 on Thursday 1 September at Saitama Stadium 2002. 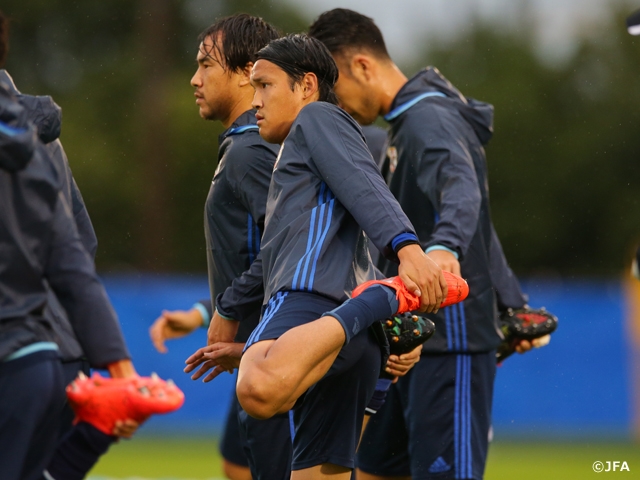 MF KIYOTAKE Hiroshi (Sevilla FC/Spain)
We must win the coming match, as it’s our first game and it’s at home. I will not be satisfied with a tie. Although I expect it’ll be tough, I think it’s not easy for the opponents either. We’d like to perform well and confidently. I want to be on the pitch, of course, but we have to play together as a united team in the final qualifiers. We want to prepare well, so that any of us can perform well in the game. Also, I believe it’s essential that the players on the bench can have an impact on the match when given the chance to play. I have to remain focused either way. I don’t feel any pressure. I am just really looking forward to it.

DF MORISHIGE Masato (F.C. Tokyo)
I know the final qualifying round is not easy at all. Accidents tend to happen as they always did in the past. I’d like to prepare mentally for them, on top of improving on my performance. Despite the short preparation, we’ve been holding detailed meetings as well. I’d like to keep communicating among the team. The number 10 of the UAE can deliver passes in any situation, and his teammates believe in him and run into dangerous areas. So I’ll remember that and keep an eye on their movements. We need to make it clear who should go for the ball, while covering each other as a team.

MF HARAGUCHI Genki (Hertha BSC Berlin/Germany)
While playing, I’d like think about how I can contribute to the team on the pitch. Unlike my club, I’m required to go towards the goal more aggressively and score, rather than just creating opportunities. It’s my current task. If I can do so in the actual game, it’ll bring me huge confidence. I’m focusing on striking goals this year. With that in mind, I believe I can score more goals. Getting positive results is the only way to earn a position in the team. So I’ll play for it.

GK HAYASHI Akihiro (Sagan Tosu)
The goalkeeping coach told us: “the goalkeeper will certainly be vital in attaining the result of the match.” As I also believe the goalkeeper is an essential position to get us through the final qualifiers, I’d like to prepare well. After having a new goalkeeping coach, I feel like I have to display my skills all over again. I need to improve my shot-saving accuracy and I want to become more confident with the strong high ball against tall opponents. In the match against the UAE, we need to keep our eyes on the player with number 10, as he can be extremely threatening whenever he faces forward.