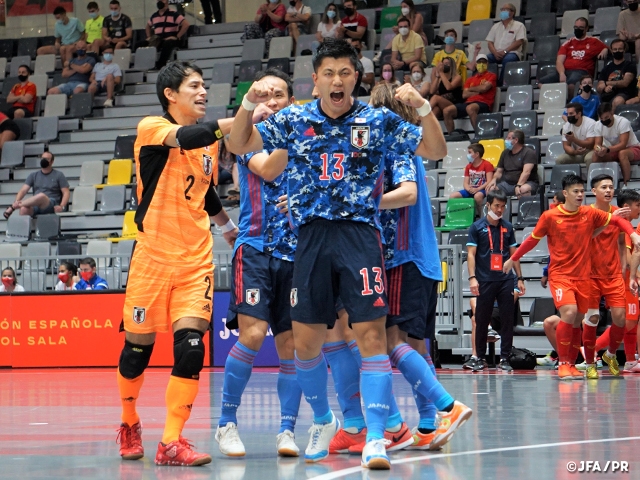 The Japan Futsal National Team, who is touring Europe ahead of the FIFA Futsal World Cup Lithuania 2021™, marked their first win of the tour with a win over the Vietnam Futsal National Team in an international friendly tournament competed by four countries.

Following the international friendly match against Argentina in Naron, Spain, the team travelled to Jaen, Spain on 26 August to participate in an international friendly tournament competed by Japan, Spain, Guatemala, and Vietnam. Japan entered the tournament by facing Vietnam, an opponent they lost at the final round of the FIFA Futsal World Cup Colombia 2016™ Asian qualifiers. Facing a team he formally managed, coach Bruno GARCIA named PIRES Higor, HOSHI Shota, NISHITANI Ryosuke, HOSHI Ryuta, and MUROTA Yuki as the starting five.

The first period started with both sides testing the water. In efforts to score the opening goal, Nishitani received a long ball delivered by Pires and struck the first shot of the match, but his attempt was blocked by the opposing player. With Japan rotating their set in the fourth minute, SHIMIZU Kazuya stepped into the pivot position, actively making runs into the open space to create opportunities, but the Vietnamese side showcased great defence to deny the Japanese striker from taking shots. The third set entered the match in the seventh minute, as the team’s youngest player, MORI Gensuke, displayed a great individual effort to take a shot, but failed to capture the target. Coach Garcia continued to rotate the three sets to break down the Vietnamese defence, as MINAMOTO Akira came close to breaking the deadlock in the closing minutes of the first period, but his effort was denied by a superb save made by the opposing goalkeeper. 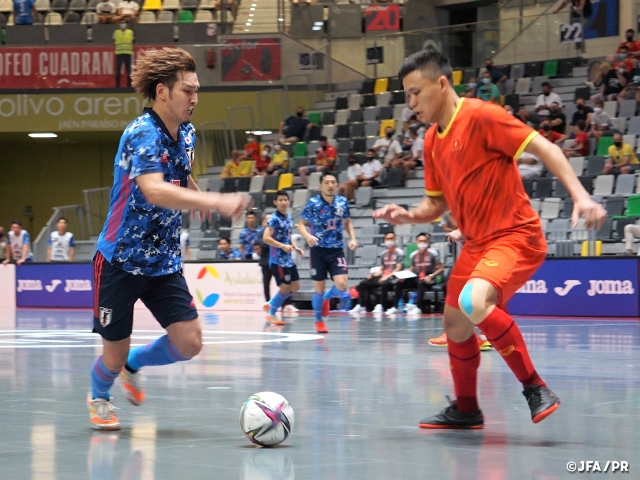 With the two sides entering halftime scoreless, coach Garcia gave a pep-talk to his players, “Chances will not come to us if we don’t challenge the ball with all we’ve got. We need to enter the second period with a strong determination to dominate the match.”

SEKIGUCHI Yushi stepped into the goalmouth in the second period, as HENMI Katsutoshi Rafael, Shimizu, and OLIVEIRA Arthur combined with each other to create a close opportunity to start off the new period. Another chance was created a minute later, when Oliveira connected with a lobbing pass delivered by YOSHIKAWA Tomoki to strike a powerful volley shot, but his attempt was denied by the goal post. Despite their struggles to capitalise on the opportunities, Japan continued to apply pressure upfront, forcing Vietnam into foul trouble. In the 33rd minute, Vietnam committed their sixth foul, allowing Oliveira to strike a shot from a free kick. Although they were able to block this shot, Vietnam committed another foul just moments later, this time allowing Shimizu to take the free kick, in which he successfully converted to give Japan the lead. In efforts to rally back, Vietnam deployed their powerplay in the final three minutes, but Japan showcased great composure to maintain the lead, as they earned their first win of this Europe tour, 1-0. 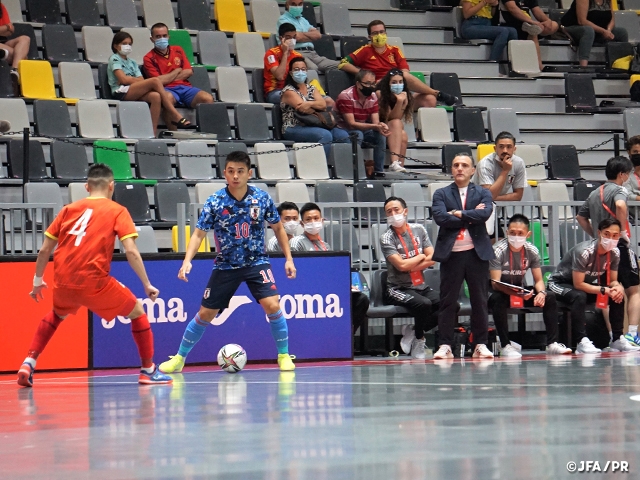 Bruno GARCIA, Coach
This was a long awaited victory for us. In order to keep a positive vibe through this extensive training camp, this was a significant win. We have been playing with high intensity throughout this tour, and I am certain that the players are feeling fatigued. However, the players have continued to make tireless efforts that is worthy of a victory. We will continue to make the necessary adjustments ahead of our next match and prepare ourselves in the best way possible.

GK #1 PIRES Higor (Pescadola Machida)
We were able to start off the tournament in Jaen with a great victory over Vietnam. They were a tough opponent and the match against our AFC rival came down to the wire. The fact that they deployed a different style from our recent opponents made this match even harder. However, we were still able to take the initiative and create many opportunities, which allowed us to take control over the match. I am glad that we were able to obtain a victory that helps us move forward and develop as a team ahead of the World Cup.

FP #9 MORI Gensuke (Pescadola Machida)
We were finally able to win a match after playing four matches in this Europe tour. It was great to see us prevail in a tough match like this. However, I am not satisfied with my performance, so I will continue to work hard to become a player that can contribute to the team.

FP #10 HENMI Katsutoshi Rafael (SL Benfica/Portugal)
It feels like our tireless efforts are finally coming to fruition. This win over Vietnam was our first victory of this Europe tour, but we hope to make this a start of many more victories to come. I am sure that we will be facing many adversaries, but we will prepare ourselves to overcome each challenge.

FP #13 SHIMIZU Kazuya (Cordoba Patrimonio/Spain)
We struggled dearly, but we were able to obtain our first victory of this tour. Despite winning the match, we saw many flaws in our game, so we must continue to improve ourselves while building on the positives. We will focus to recover ourselves ahead of our next match against Guatemala.