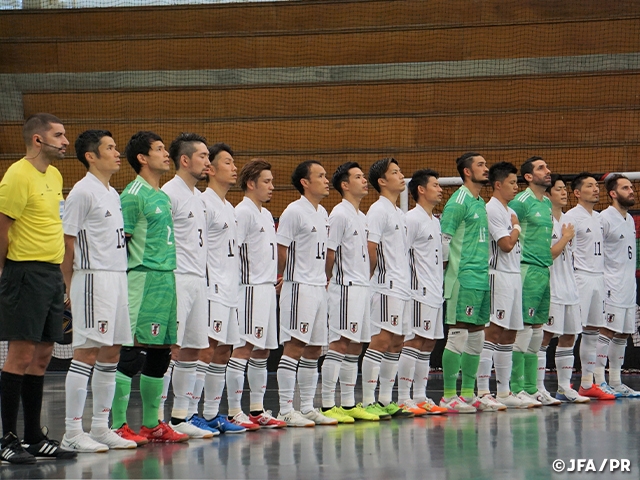 The Japan Futsal National Team, who are in Europe to train ahead of the FIFA Futsal World Cup Lithuania 2021™, played an international friendly match against Venezuela Futsal National Team on Thursday 19 August, where they conceded the equaliser with nine second remaining on the clock.

One day after their match against Portugal, coach Bruno GARCIA sent off his players by giving a pep-talk, “We put up a strong fight against one of the best teams in the world yesterday. We were able to deliver a spectacular match for the fans at the stadium and those cheering us from Japan. I strongly believe that we have learned so many from yesterday’s match and we have improved the overall level of this team. Let’s win this match before returning to Spain.”

Japan started the same line-up from their match against Portugal, with SEKIGUCHI Yushi in goal and HOSHI Shota, NISHITANI Ryosuke, HOSHI Ryuta, and team captain YOSHIKAWA Tomoki as the four field players. Although the match saw Venezuela take the initiative in the early minutes, it was Japan who scored the opening goal. The play came in the seventh minute, when YAGI Kiyoto received a pass from SHIMIZU Kazuya before striking a shot, which was blocked by the Venezuelan goalkeeper, but MUROTA Yuki was there to convert the deflection. Venezuela dominated the match following this goal, as they applied more pressure, inducing the Japanese players to accumulate five fouls. With momentum on their side, the South American side scored the equaliser in the 16th minute, but Japan responded quickly with the goal of OLIVEIRA Arthur to maintain their lead at halftime.

The second period saw Japan create multiple opportunities, as Shimizu, MINAMOTO Akira, and MORIMURA Takashi made attempts to threaten the Venezuelan goal, but fell short from finding the net. Venezuela created a close opportunity from a counterattack in the 33rd minute, but Japanese goalkeeper YAZAWA Daimu, who was named to start the second half, came up big to keep the score intact. In efforts to level the match, Venezuela deployed their powerplay in the final three minutes, but the Japanese players showcased great intensity level to keep the opponents at bay. However, with just nine seconds remaining on the clock, Venezuela scored the equaliser to end the match in a 2-2 draw. 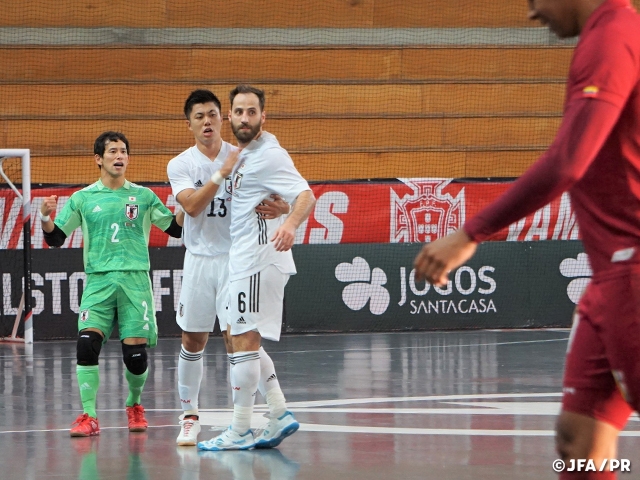 Bruno GARCIA, Coach
Playing in our second match in two days against a quality opponent who are fresh, this was an extremely tough match for us. We played to win the match but conceded the equaliser with just nine second left to play. This is certainly a disappointing loss, but at the same time a great learning experience for the team. The fact that we were able to showcase a quality performance after a long break, gives us great confidence, and we hope to make the most of these two matches to raise the overall quality of the team. We will now return to Galicia, Spain and prepare ourselves ahead of next Tuesday’s match against Argentina.

GK #16 YAZAWA Daimu (Vasagey Oita)
It is very regretful that we conceded the equaliser with just nine seconds left. I was given the opportunity to start the second half, so entered the match with a strong determination to keep a clean sheet. Although I was able to make some good saves, I still need to do a better job delivering the ball upfront. I wish I could be the hero by stopping that lost shot, but it wasn’t meant to be. However, this was my first international match in a while, so I had lots of fun. I will continue to work hard so that I can get another opportunity to play.

FP #6 OLIVEIRA Arthur (Nagoya Oceans)
I am glad I was able to score my first goal as a member of the Japan Futsal National Team. However, the team is still winless at this tour in Europe, so we are getting reminded that we need to work even harder. We will continue to make efforts to raise the overall level of this team ahead of the World Cup.

FP #7 MUROTA Yuki (Espolada Hokkaido)
Although we have been able to showcase strong performances against powerhouses like Portugal and Venezuela, we are still without a win. We hope to make the most of this experience. I personally was able to find many flaws in my game, so I hope to make the necessary adjustments in our future trainings.

FP #11 HOSHI Shota (Nagoya Oceans)
We are able to play these matches and carry out our daily activities because of the support of many people. Thankyou very much. As a player standing on the pitch when the team conceded the equaliser with just nine second left on the clock, I feel responsible for that goal. As we strive to win each match, it is important that we get emotional for each result and learn from each win and loss. We are certainly heading towards the right direction, so we will continue to make forward progress.