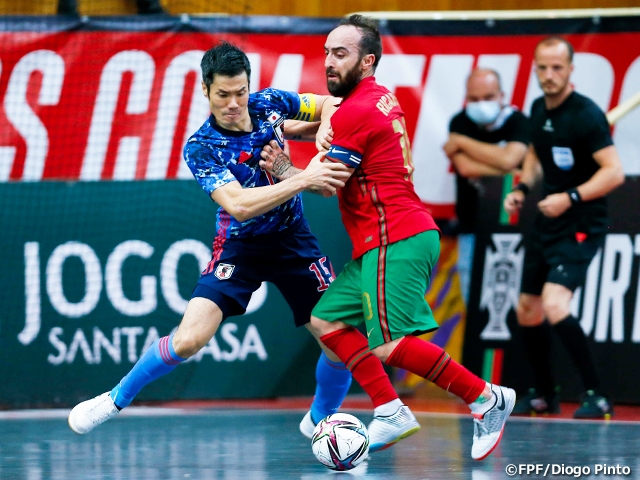 On Wednesday 18 August, the Japan Futsal National Team played an international friendly match against the Portugal Futsal National Team at Rio Maior, Portugal. In a preparation match ahead of the FIFA Futsal World Cup Lithuania 2021™, which will take place this September, the team managed to take the lead twice against the European champions but lost the match 2-3.

With the worldwide spread of COVID-19, the Japan Futsal National Team have not played an international match since facing Paraguay at Sapporo in February 2020. With the World Cup fast approaching, the team is on a month-long tour in Europe where they are scheduled to face six different national teams, and this match against Portugal represented the first match of the series.

Ahead of the match, coach Bruno GARCIA gave a pep-talk to his players, “Although this is our first match in a year and a half, we have thoroughly prepared ourselves to play at the world stage through the domestic camps. We will be facing the current European champions, but we must not overestimate them and play our futsal with confidence. Let’s go out there and give our best effort on behalf of Masa (HIRATA Neto Antonio Masanori), who played with the team until we left for this tour.”

On this day, SEKIGUCHI Yushi started in goal with HOSHI Shota, NISHITANI Ryosuke, HOSHI Ryuta, and YOSHIKAWA Tomoki as the field players. At the start of the match, Hoshi Shota received the ball from Sekiguchi before firing the first shot of the match, which failed to capture the target. The team rotated their sets in the third minute, as OLIVEIRA Arthur stepped on the court for the first time as a member of the Japan National Team, after acquiring Japanese citizenship last year. It was Japan who took the initiative in the early minutes, but led by RICARDINHO, who has played with Nagoya Oceans in the past, Portugal gradually picked up their pace to threaten the Japanese goal. MORI Gensuke, who also made his national team debut in this match, came close to scoring the opener in the 13th minute, when he initiated a counterattack from the halfway line to create a one-on-one situation, but his attempt was denied by the Portuguese goalkeeper. Although it was Portugal who dominated the closing minutes of the first period, Sekiguchi showcased a spectacular performance to deny the shots from passing him, keeping the clean sheet intact for the Japanese side.

In the second period, coach Garcia made the switch to have PIRES Higor defend the goal. The deadlock was broken in the 21st minute, when KATO Minami delivered a lobbing pass towards SHIMIZU Kazuya who controlled the ball superbly and struck a powerful shot that pierced the net. Despite conceding the equaliser in the 25th minute, Japan retook the lead in the 28th minute, with the shot taken by HENMI Katsutoshi Rafael, who currently plays for Portuguese powerhouse SL Benfica. However, the European champions rallied back with consecutive goals scored in the 29th and 37th minute to claim the lead for the first time in this match. Japan made their final efforts by deploying their powerplay in the closing minutes, but fell short from levelling the match, losing their first match of this Europe tour 2-3. 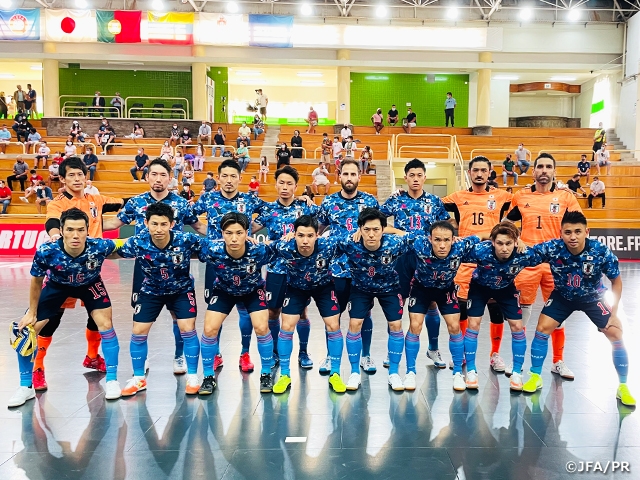 Bruno GARCIA, Coach
Our first match in 18 months was against the current European champions. Considering that our opponent had been active as a team participating in the UEFA Futsal Euro 2022 qualifying competition, this is a positive result. We were caught off guard and gave our opponent opportunities to score three goals, but we also managed to take the lead twice, control the ball possession for a long stint, and applied aggressive pressure to contain our opponent from showcasing their usual performance. In that sense, I am very satisfied with my players’ performance, as they proved that they are capable of competing against any opponent. We will be facing another tough opponent tomorrow. We will address both the positives and negatives from this match, make the necessary adjustments, and strive to showcase a strong performance against Venezuela. We will feed off of the expectations of our fans, use them as motivation to prepare ourselves for the upcoming World Cup.

FP #9 MORI Gensuke (Pescadola Machida)
This was my cap with the national team, while the team played their first match in a year and a half. This loss has shown that we still need to improve ourselves both as a team and as individuals. We have no time to waste, so we must keep our heads up high and try to make the most out of this experience. We will give our best efforts to prepare for tomorrow’s match.

FP #10 HENMI Katsutoshi Rafael (SL Benfica/Portugal)
Although we were not able to earn a win over Portugal, we must now give our best efforts to prepare for the next match. There are six matches scheduled ahead of the Futsal World Cup, so we must learn from each match and try to raise the overall level of the team.

FP #13 SHIMIZU Kazuya (Cordoba Patrimonio/Spain)
We were able to showcase our style of futsal in our first match in nearly a year and a half but was not able to obtain the victory. In order to make this a better team, everyone must visualise the World Cup and play with the determination to win each match ahead of us. We will make the necessary adjustments and strive to win the next match. We hope to showcase a performance that can deliver positive news to our fans in Japan. 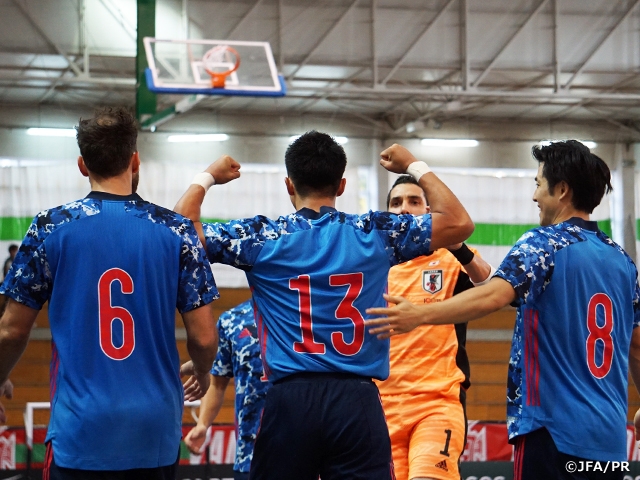 FP #15 YOSHIKAWA Tomoki (Nagoya Oceans)
This match really exposed the strengths and weaknesses of this team. Although we were able to take the initiative and play with a high level of intensity in defence, we saw so many flaws in our offence. In order to win against stronger opponents, we must play with a clear intent. We will use this experience to win our next match and finish this two-match series played in Portugal on a high note.