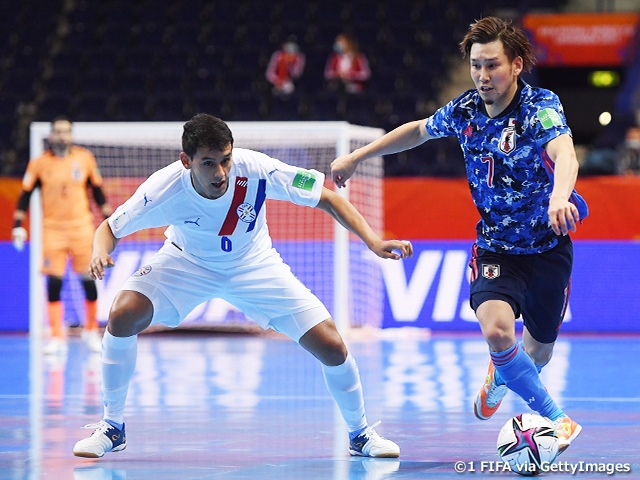 On Monday 20 September, the Japan Futsal National Team faced the Paraguay Futsal National Team in the third group stage match of the FIFA Futsal World Cup Lithuania 2021™. Despite losing the match 1-2, the team clinched the knockout stage by finishing within the four best third-placed teams.

Japan and Paraguay entered the third group stage match with an equal record of one win and one loss, but Japan had the advantage in goal difference, putting them in position to clinch the knockout stage with a draw or better. However, as coach Bruno GARCIA mentioned before the match, “The only mentality we carry is the one that always strives for victory,” the Japanese side approached the match with the intention to earn three points from this match.

With their ticket to the knockout stage at stake, coach Garcia named PIRES Higor as their starting goalkeeper and HENMI Katsutoshi Rafael, SHIMIZU Kazuya, OLIVEIRA Arthur, and NISHITANI Ryosuke as their starting line-up.

Japan started the match by showing great aggression, as they took numbers of shots from the early minutes. In the fourth minute, Oliveira intercepted a pass in the opposing territory before striking a shot. With Shimizu redirecting the shot, the ball went through the goalkeeper’s legs and into the Paraguayan goal, giving Japan an early lead. 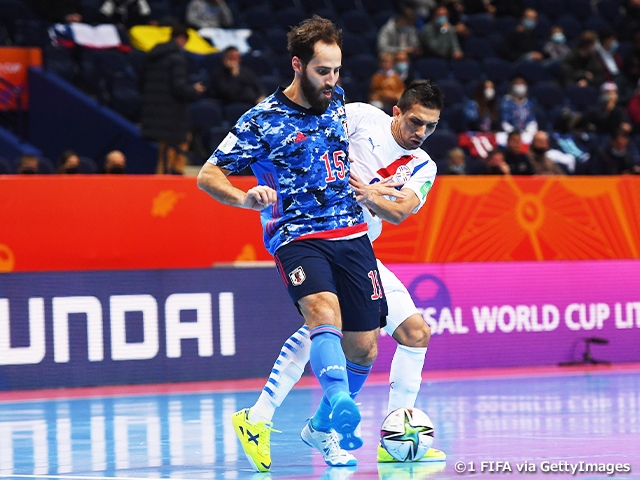 Despite scoring the opener, Japan struggled to find their rhythm, as Nishitani later reflected, “We weren’t able to gain momentum as we thought.” Paraguay on the other hand, effectively utilised the width of the pitch to connect their passes. In the seventh minute, Paraguay penetrated the central area with a diagonal pass, setting up the goal of MARECO to equalise the match.

After finishing the first period 1-1, Japan, who possessed the ball 60% and took more shots than Paraguay in the first period, gradually picked up their pace to create opportunities. Staring with a shot taken by Henmi in the 22nd minute, HOSHI Shota made an attempt in the 23rd minute, followed by a shot struck by KATO Minami in the 24th minute. Despite showing great composure to control the match, Japan struggled to convert their opportunities.

As Japan applied more pressure upfront, Paraguay found the perfect opportunity to counter in the 33rd minute. With Japan losing possession of the ball, J.A.SALAS broke through the centre before sending the ball to his older brother J.SALAS, who ran up the left side and struck a shot that pierced the Japanese goal.

Trailing by a goal, Japan deployed their powerplay in the final three minutes, but fell short from scoring the equaliser, giving Paraguay a 2-1 victory and their ticket to the knockout stage. Despite the loss, with Spain defeating Angola 4-1, Japan still clinched the knockout stage by finishing within the four best third placed teams, along with Thailand, Vietnam, and Serbia who also finished third in their respective groups.

Japan will now enter the round of 16, where they will face the five time World Cup champions Brazil, who has scored the most goals (18) while conceding the fewest goals (2) in this year’s tournament.

The team will now make their way to Kaunas, where they will play their round of 16 fixture of the FIFA Futsal World Cup Lithuania 2021™ against Brazil on Thursday 23 September.

Bruno GARCIA, Coach
As mentioned before the match, we entered today’s match with the intention to earn a victory. Although it was an equally matched bout, Paraguay had the slight advantage in terms of experience at the World Cup. We also committed two unacceptable mistakes that cost us two goals, which reminded us how costly a mistake can be at this stage. We will now face Brazil, who holds the record for most World Cup titles. Although we have achieved our initial goal of clinching the knockout stage, we must now try to pull-off a giant killing to make history. Despite advancing through the group stage, I am having a mixed feeling because we were not able to achieve our goal with a victory. I told my players that we are finally at the starting line, so we will try to prepare ourselves in the best way possible ahead of our next match. 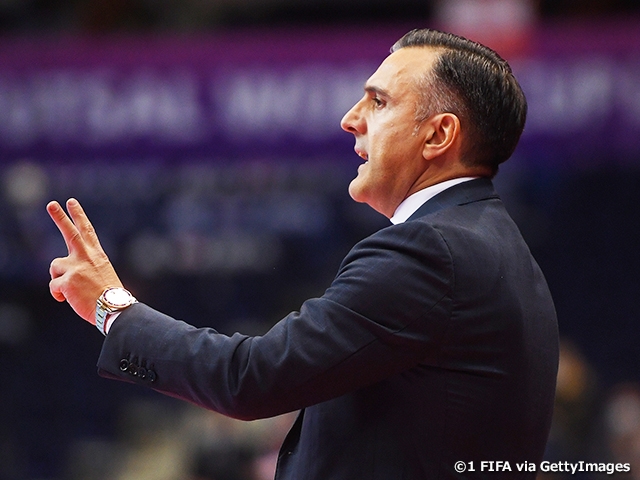 #4 FP YAGI Kiyoto (Nagoya Oceans)
Although we were in position to clinch the knockout stage with a draw or better, we entered this match with the full intention to win. Despite having the advantage in ball possession, we struggled to find our rhythm and conceded two goals from plays we could have prevented, so we are disappointed with our performance. Personally, I was given more minutes than the first two matches, so I wanted to help the team by making lots of runs. We are all responding to this result differently, but we need to reset our minds and try to make the most of this experience, just as Hoshi Shota said after the match, “we were able to achieve our goal of reaching the knockout stage, so we just need to focus on our next step.”

#9 FP SHIMIZU Kazuya (Cordoba Patrimonio/Spain)
We were able to score the opening goal just as we planned, but the goals we conceded were goals we could have prevented if we stayed true to the game, so overall this was a disappointing match. I was just there to redirect the shot taken by Arthur, but I am glad I was able to score a goal that helped the team take the lead. The goal is something I will always remember, but more than anything, I am regretting the fact that we lost this match. Although we have just finished today’s match, the preparation towards our next match has already started, so I will try to recover my body and condition myself ahead of our next training session. Each set must make the necessary adjustments to fix the errors, while I need to make more efforts upfront to help my set perform better. 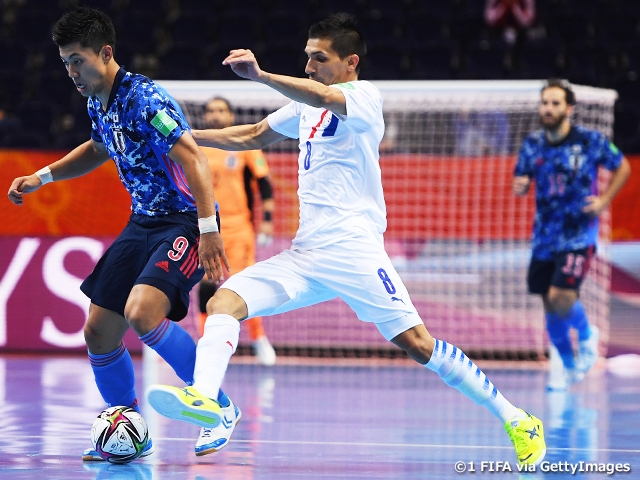 #14 FP NISHITANI Ryosuke (Nagoya Oceans)
After we scored the opener, there were times when we were able to find our rhythm and take the initiative of the match, but our opponent took full advantage of our mistakes to overtake the match. Personally, I thought it was harder to defend against Paraguay than Spain. I also have the impression that we were not able to make adjustments against the opponent’s defence neither. Every opponent at this stage is going to be a world powerhouse, and Brazil is one of the best teams out there. We must not play passively, but rather play with the intention to initiate action. Compared to the previous tournaments, I feel like I am able to play with composure. There were moments in the past where I couldn’t remember much about the match I played and questioned myself “what am I doing?” Over the past five years, I have been able to develop my mental aspect, which allowed me to sustain a steady performance on the pitch. Even if I am given plenty of time to play on the pitch, it doesn’t mean a thing if I can’t earn results. I hope to learn from this experience and try to incorporate them into my future performances.