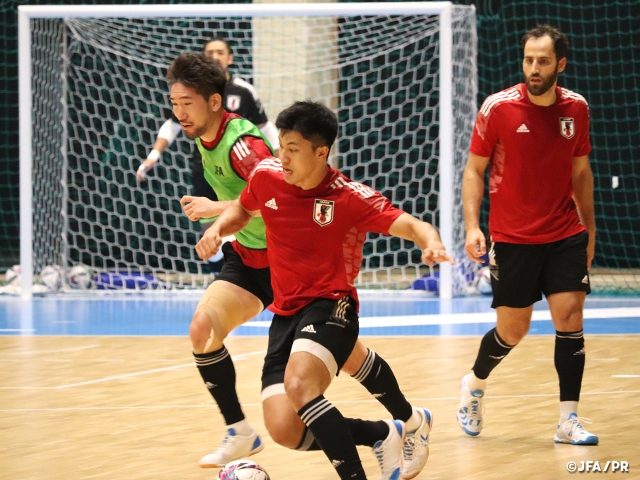 One day before their second group stage match of the FIFA Futsal World Cup Lithuania 2021™ against Spain, the Japan Futsal National Team held a training session behind closed doors on Thursday 16 September.

Ahead of their training session, coach Bruno GARCIA gave a pep-talk during a meeting, where they reviewed footages from their friendly match against Spain in August, “The matches change every time. That is why we must think about the match ahead of us, rather than the match in the past. However, there are things we can learn from the past.”

Instead of criticising and analysing what went right or wrong in their past matches, coach Garcia focused on organising and predicting what could happen in their next match against Spain and specified what the team must do in those situations. The team also went through technical and tactical details to keep the players on the same page.

During the training session, which was closed to the media except for the first 15 minutes, the team thoroughly went through their set-plays, including corner kicks and kick-ins. Coach Garcia stressed the importance for the players to be vocal in these plays, demanding active communication, especially from the kicker.

To conclude the session, coach Garcia gathered his players and told them, “We need a strong mentality to win matches. We have narrowed the gap between us and Spain through each match we played against them. Tomorrow we will overtake them.” Team captain YOSHIKAWA Tomoki followed by saying, “If any one of us is hoping for a draw, we can’t win. We need to commit ourselves to earn a win. We need to believe in ourselves.” 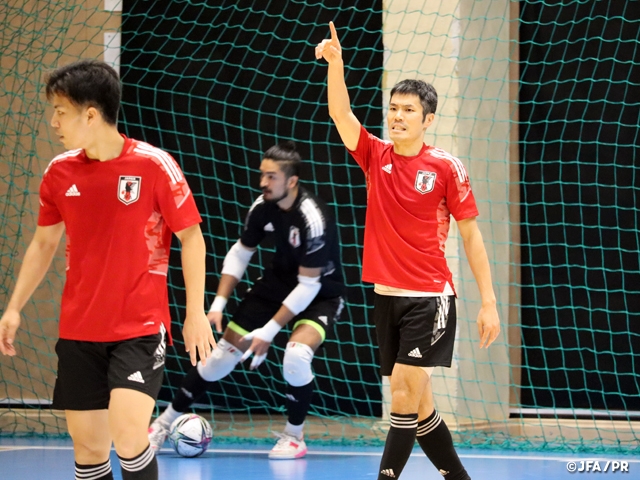 Assistant coach SUZUKI Ryuji, who has the experience of working as a coach in Spain, shared his insight behind the strengths of the Spanish side and pointed out that their well organised league structure is playing a major role in their player development. “From the early ages, players in Spain are used to playing in leagues with promotion and relegation to higher and lower divisions, and that is where their competitiveness is getting nurtured.” Cultivating the youth is an essential factor when building a winning team, and Spain’s competitive development system has made them today’s world powerhouse.

FP #7 MUROTA Yuki (Espolada Hokkaido)
Although this is my first World Cup, I am not nervous. When I scored off the deflection of Hoshi Shota’s shot, I was prepared to convert any deflection. If we manage to apply pressure from the front line, I feel that we can take control of the match. As much as I want to showcase my abilities in offence, I must first focus on playing solid defence. We are expecting Spain to play with a much higher intensity than the friendly match we played in August, so this will be a totally different match. However, I strongly believe that we can win the match as long as we can play our best defence.

FP #9 SHIMIZU Kazuya (Cordoba Patrimonio/Spain)
It means a lot that we were able to start off the tournament with a win and personally, I am overwhelmed by joy from this World Cup experience. I was able to keep my cool at match time, but when I first arrived at the match venue, I was a bit jittery. My job is to score goals, but I must do a better job in defence. Our next match against Spain is going to be a tough match if we cannot reach our full potential. Spain is a strong team that consists of players with great techniques and plenty of experience, and they are capable of taking advantage of any small mistakes we make. We have come long ways since losing at the 2016 World Cup qualifiers, and we are here with strong determination to make history for the Japanese futsal world. Regardless of how I score it, any goal scored at the World Cup is going to be an unforgettable goal for me, so I hope to score a goal, not for myself, but for the team and for the Japanese football community.

FP #11 HOSHI Shota (Nagoya Oceans)
I think our win over Angola was well deserving, and we were able to showcase many of the things we prepared for this tournament. After failing to qualify for the World Cup in 2016, this became a place we had to reach. However, now that we are here, this tournament became a tournament we must win. So instead of thinking that this is a special stage, I am more focused on what we need to do in order to win. In the play where Ryuta scored the goal, I knew Pa-shan (NISHITANI Ryosuke) was going to pass the ball to me, so I made sure where Ryuta was at before sending the ball to him. The fact that we play on the same club helped us score that goal. Once we enter a tournament, it is very difficult to change a major component of our game, so we are focused on executing each of our plays and believing in what we have worked over the years. We can make small adjustments by communicating with each other, so we hope we can take advantage of our set-pieces to score more goals. 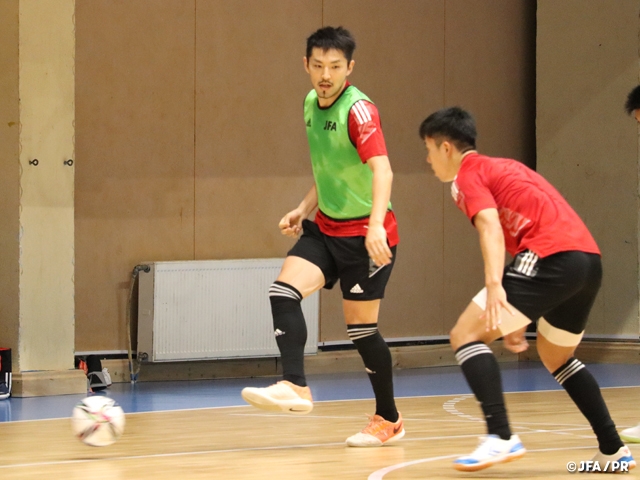