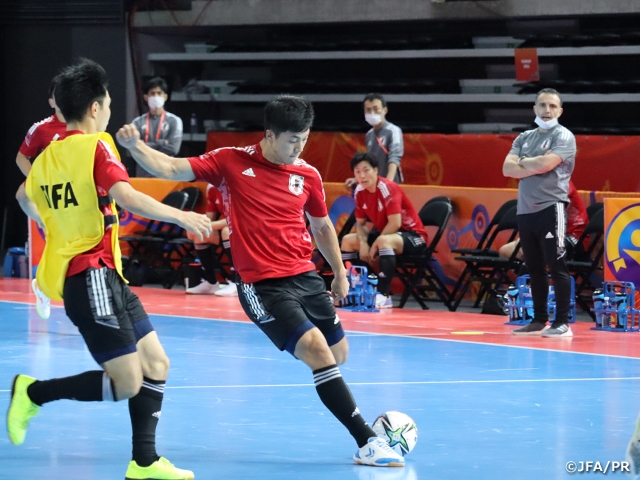 On the first day of the tournament, two matches each of Group A and B were played, where Kazakhstan and Russia won big, while the host country Lithuania lost to Venezuela 1-2. From here, 52 matches will be played in 22 days.

The Japan Futsal National Team, who is scheduled to play their first group stage match on Tuesday 14 September, held their official training session at the match venue, Klaipeda Arena.

Once arriving at the match venue, coach Bruno GARCIA shared his excitement, “It smells like the World Cup. It has a completely different scent from usual.” Japan marked their best finish at the World Cup when they reached the round of 16 in the FIFA Futsal World Cup Thailand 2012™ but failed to qualify for the FIFA Futsal World Cup Colombia 2016™ after finishing sixth in the AFC Futsal Championship, which they entered seeking for their third successive title. Coach Garcia was the coach of Vietnam, who defeated Japan at the semi-finals of the AFC Championship to clinch their first World Cup. Entering their first World Cup in nine years, the enthusiasm showcased by the team is extraordinary, as coach Garcia vowed that Japan will “become the centre of the tournament.” Players also reflected on 2016 and shared their agony, “It was so devastating that I though of quitting futsal” said SEKIGUCHI Yushi, while NISHITANI Ryosuke mentioned, “It felt like getting my heart ripped out.”

Coach Garcia gathered the players who had completed the one-hour official training session to check the feel of the court of the match venue, and said, “It starts here,” and asked for a quick pep-talk from the three team captains. Game captain YOSHIKAWA Tomoki stepped up first and mentioned, “We don’t know when we will have this opportunity again, so let’s have fun. Let’s get ready to enjoy ourselves.” HOSHI Shota, who is set to retire after this season, followed by saying, “Let’s leave no regrets.” The team huddled up to conclude the session after HENMI Katsutoshi Rafael gave a big smile and said, “Let’s give our best efforts.”

On the second day of the tournament, Portugal will square off against Thailand, while Vietnam is set to face Brazil. Japan is scheduled to face Angola on the third day, Tuesday 14 September, against Angola. 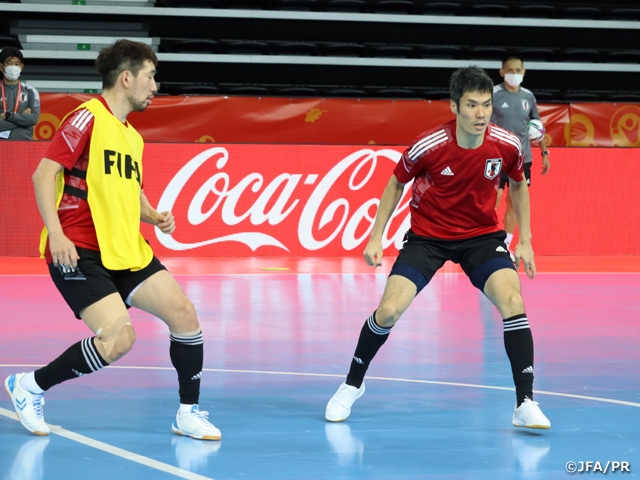 FP #11 HOSHI Shota (Nagoya Oceans)
After missing out on the last tournament, this will be our first World Cup in nine years. I have been preparing myself with a strong intention to pick up where we left off. As Coach Bruno always mentions, we want to achieve our goal of becoming the centre of this tournament. I believe that we can achieve our goal and I am looking forward for our first match. I personally have the experience of getting my pass intercepted which cost the team a goal at the round of 16 against Ukraine in the 2012 World Cup. Although we were able to make history by reaching the knockout stage, I can tell now that we weren’t prepared to go any further. We must make the most of our experiences to redeem ourselves for the loss we suffered in 2016. I really want to win with this team. I am given the opportunity to play in the World Cup with my brother Ryuta, which is very special, so we hope to showcase our combination to help the team earn a victory. I have been with the national team since the 2010 AFC Futsal Championship and this World Cup will be my last stint with the national team. I don’t know how I will be feeling at the end, but I hope to enjoy every moment.

FP #6 YOSHIKAWA Tomoki (Nagoya Oceans)
It’s been five years since we failed to qualify for the previous World Cup. These five years felt both very long and short. Looking back on it now, I think it was a time frame where I experienced a lot of good and bad things and saw great growth both as a team and as an individual. So many people have supported our growth behind the scenes, including our family members, friends, teammates, and supporters. I think the World Cup is a place to show our growth and at the same time to express our gratitude to those who have supported us over the years. There are also many of our teammates who wished to be here but couldn’t make it into the final roster. We hope to play on behalf of all those people and give our best effort in each and every match, so please root for us.

FP #9 SHIMIZU Kazuya (Cordoba Patrimonio/Spain)
The FIFA Futsal World Cup Lithuania 2021™ has finally started. I was not selected into the squad for the 2016 AFC Futsal Championship and watched the tournament in Toshkent on TV. I remember being disappointed in myself for not having what it takes to help the team and vowed to myself that I will become a player that can lead the team into the World Cup. After a year of postponement, the time has finally arrived, and I can hardly wait for our first match. I will remember the feelings I felt five years ago and use them as motivation to do well at this World Cup. Also, many players have joined this team under the helm of coach Burno, but only 16 are here to compete. We must keep their presence in heart and fight as a team. Lastly, I would like to mention that all of the support from our fans are giving us great energy. Although the world is still under great distress, we are receiving your support through SNS and other medias. Let’s fight together and share the great moments that are about to begin from here! 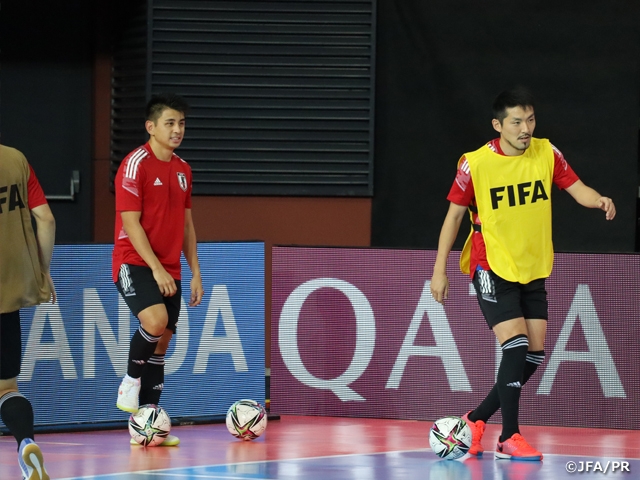