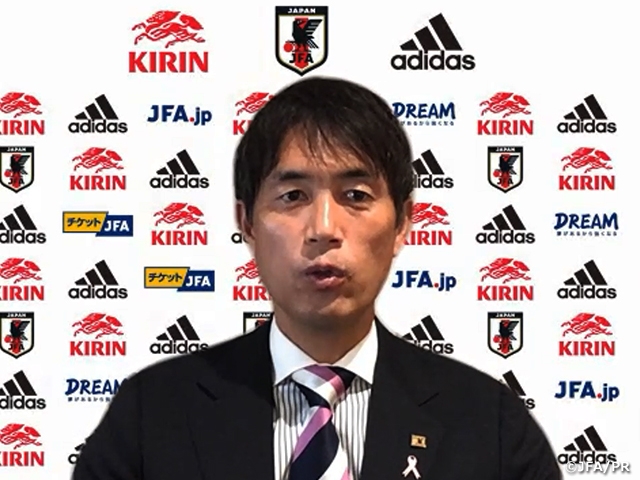 On Friday 28 October, Japan Football Association (JFA) held a press conference to announce the squad of the Nadeshiko Japan (Japan Women's National Team), who will be traveling to Europe in November. Chairman SASAKI Norio of the JFA Women's Committee and Head Coach IKEDA Futoshi attended the online press conference to name the 23 players who will take part in the two international friendly matches scheduled to take place in Spain.

The announced squad featured many of the players who participated in the series of matches played in October, as veteran players like YAMASHITA Ayaka (INAC Kobe Leonessa), KUMAGAI Saki (FC Bayern Munich), SHIMIZU Risa (West Ham United), and TANAKA Mina (INAC Kobe Leonessa) were selected, while 18 year old FUJINO Aoba (Nippon TV Tokyo Verdy Beleza), who just made her Nadeshiko Japan debut in October, was also listed into the squad.

HASEGAWA Yui (Manchester City) and IWABUCHI Mana (Arsenal), who were not involved in the two matches played in October, made their return to the squad, as the team will now be in full strength ahead of the FIFA Women's World Cup Australia/ New Zealand 2023™.

Joining the online press conference from New Zealand, Coach Ikeda spoke of the importance of the two matches, “Playing against teams ranked above us in the FIFA rankings will give us a benchmark of where we are at and where we need to improve.”

Making her first call-up to the Nadeshiko Japan is OHBA Shu (East Tennessee State University), a product of JFA Academy Fukushima who helped Japan finish second in the FIFA U-20 Women's World Cup Costa Rica 2022™ along with Fujino. When asked about the young goalkeeper, Coach Ikeda commented, “Ohba's physical ability and courageous play will benefit us greatly.”

The Nadeshiko Japan will face England on Friday 11 November, and Spain on Tuesday 15 November.

SASAKI Norio, Chairman of JFA Women's Committee
We will be facing England and Spain, who will provide us with a benchmark for next year’s FIFA Women's World Cup™. We will fight to the best of our ability in these two matches and try to make the most of the experience ahead of the World Cup. Japan have lost to Spain at the FIFA U-17 Women's World Cup India 2022™ and are in the same group with them in the FIFA Women's World Cup Australia/ New Zealand 2023™, so I personally am looking forward to the match against Spain in particular.

IKEDA Futoshi, Head Coach of Nadeshiko Japan (Japan Women's National Team)
Following our matches in October, we will now travel to Spain in November. Now that the groups have been decided for the World Cup, I am very excited to be able to move forward with the team building process, and we hope to make the most of this tour to improve the team. We were aware of the possibility of being matched up (with England and Spain) in the FIFA Women's World Cup™, and I'm looking forward to playing against the best teams in Europe. The players are also seeing this as an opportunity to build the team, so we're looking forward to testing our current strengths.