Nadeshiko Japan lose to Sweden at the Quarterfinals, eliminated from the Games of the XXXII Olympiad (Tokyo 2020) 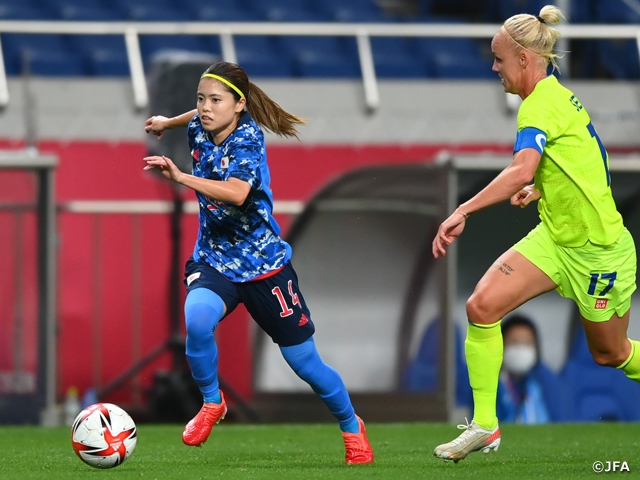 Ranked fifth in the FIFA ranking, Sweden have won the silver medal at the 2016 Rio de Janeiro Olympics, followed by a third place finish at the FIFA Women’s World Cup France 2019™. The Swedish side defeated USA 3-0 at the group stage, becoming one of the top candidates to win gold in Tokyo.

Japan on the other hand, played against Canada, Great Britain, and Chile at the group stage, where they finished third with a record of one win, one draw, and one loss. In their first match at the knockout stage, coach TAKAKURA Asako elected to start IWABUCHI Mana (Arsenal) and TANAKA Mina (INAC Kobe Leonessa) as their two strikers upfront. 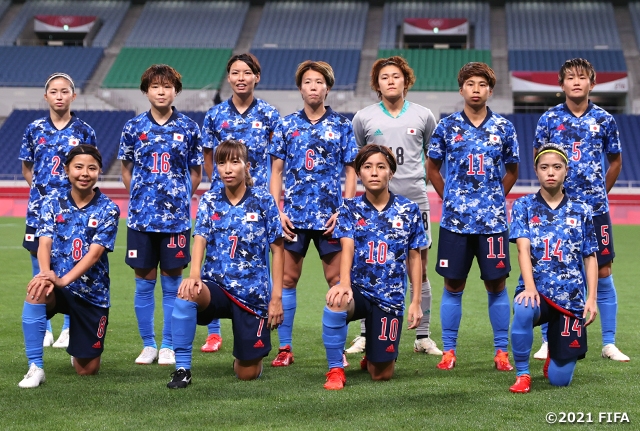 The match started with Sweden taking the initiative as they scored the opener in the seventh minute, when Magdalena ERIKSSON converted a cross with a header to take the early lead. The Swedish players took advantage of their speed and height by dumping long balls into the Japanese end, as Tanaka later reflected, “We knew they were a physical team, but they exceeded our expectations.”

Despite conceding the opening goal, Japan showcased a persistent defensive effort to minimise the damage, as YAMASHITA Ayaka (INAC Kobe Leonessa) made a spectacular save to deny the shot of Fridolina ROLFO in the 12th minute. With the Japanese side gradually increasing their ball possession, the golden moment came in the 23rd minute, when Tanaka responded to an early cross delivered by HASEGAWA Yui (AC Milan) to score the equaliser, bringing back the two sides to equal terms. 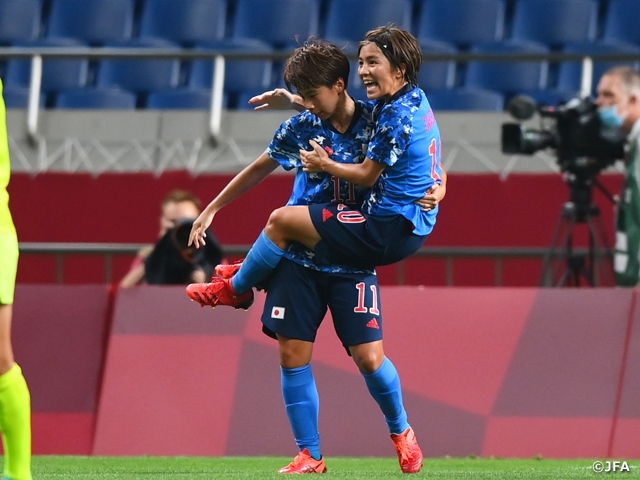 With momentum on their side, Japan started to create more opportunities through their passing game, which led to the PK earned by Tanaka in the 31st minute. However, after the play was reviewed by VAR, the call on the pitch was overturned.

After the match entered the break tied at 1-1, Japan created close chances in the 48th and 49th minute but fell short from taking the lead. Conversely, Sweden capitalised their opportunity in the 53rd minute, when Stina BLACKSTENIUS broke through the flank before piercing a shot into the near side to retake the lead. In efforts to level the match, Japan created numerous chances that threatened the Swedish goal, but couldn’t find ways to get the ball past the Swedish goalkeeper Hedvig LINDAHL. In the 66th minute, the shot taken by Kosovare ASLLANI deflected off the hand of MIURA Narumi (Nippon TV Tokyo Verdy Beleza) to give Sweden a PK, which Asllani converted herself to double the lead for Sweden. 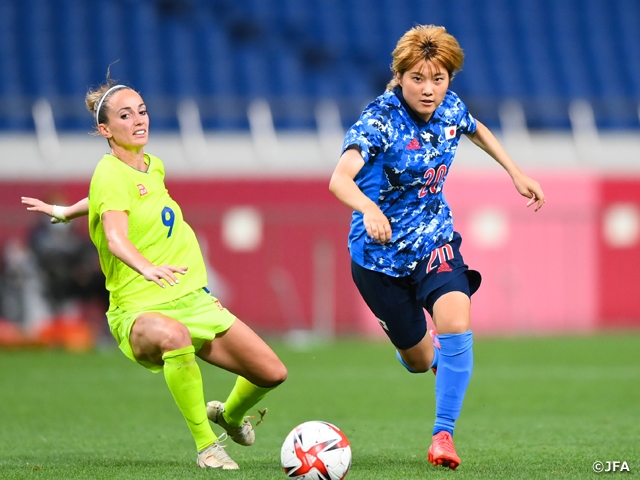 The other three quarterfinal matches all went into overtime, as Australia, USA, and Canada advanced through to the semi-finals. As a result, Australia will face USA, while Sweden face Canada on Monday 2 August to determine the finalists of the Games of the XXXII Olympiad (Tokyo 2020) women's football tournament.

TAKAKURA Asako, Coach of Nadeshiko Japan (Japan Women’s National Team)
We knew we were facing a tough opponent who showcased a strong performance at the group stage, so we entered the match with the intention to fight with everything we’ve got. It was disappointing to see our side concede in the early minutes, because that was something we talked about and wanted to fix from our previous matches. However, we managed to find our rhythm and score the equaliser from a good run of play. The players continued to play with great patience in the second half, but we ended up conceding back to back goals. The players gave their best efforts until the end, and I am proud of them for giving everything they’ve got throughout the tournament.

GK #18 YAMASHITA Ayaka (INAC Kobe Leonessa)
We needed to enter each match as a challenger and despite conceding the opening goal, I thought we played well in the first half. In the scene where we conceded the second goal, I was too concerned about the first goal in which we conceded from a cross, so I wasn’t able to respond quick enough when they opted to take a shot rather than a cross, but that was a shot I had to save. I feel fortunate to be given the opportunity to face foreign opponents as a goalkeeper. I will reset my mind and work on the things I lacked in this tournament to become a better player.

DF #2 SHIMIZU Risa (Nippon TV Tokyo Verdy Beleza)
On behalf of all the players who couldn’t make the squad and all the people who have supported us, we enter each match with the intention to give everything we’ve got. That is why this result is so disappointing. Sweden played with a unique formation where they shift heavily towards our left side, which allowed me to penetrate the right flank and deliver some good crosses. Although we were able to score the equaliser with a well-executed play, we need to reflect on how we conceded the second goal. We struggled to take the initiative in all four matches. I personally felt that the overall level of the side-midfielders has improved dramatically over the years, so I must work even harder to polish my skills.

DF #4 KUMAGAI Saki (FC Bayern Munich/Germany)
Despite playing through some tough matches, I feel like we gave everything we’ve got in today’s match. Although we were able to take control of the ball possession and give our opponent a hard time in defence, I don’t think our opponent was threatened by us, and that is where we stand in the world right now. This match gave us an opportunity to rethink about what we need to do in order to compete at the world stage. We may be skilful, but it is not enough to win against the top teams. We must use this as a learning experience to address our weaknesses and strive to change them into strengths.

DF #5 MINAMI Moeka (Mitsubishi Heavy Industries Urawa Reds Ladies)
We regret conceding the opening goal in the early minutes, and this match reminded us how high the competition level is at the world stage. We were able to keep the ball moving better than the three group stage matches and showcase our football style, but we cannot win matches if we conceded goals, so we need to reassess our defence and work to improve it. This match also made me realise that some of the things I thought I was doing enough, were not enough. However, it was good to see that our passing game and agility were effective against teams with superior physical strengths, so those are some of the aspects we hope to brush up both as a team and as individuals.

MF #14 HASEGAWA Yui (AC Milan/Italy)
How we enter the match is a theme we continuously worked on, but our opponent utilised their height advantage and we once again conceded in the early minutes. It was great that we were able to equalise within the first half, but we were not able to overwhelm our opponent after they made adjustments in the second half. Great Britain and Sweden both consisted of players with great physiques, but they were also capable of possessing the ball. With more European teams making changes to their football styles, Japan will need to make adjustments while reassessing our own style to compete against opponents with great speed and passing abilities. I think we have to dig deeper while understanding the theoretical aspects of the possession game.

FW #11 TANAKA Mina (INAC Kobe Leonessa)
Our goal was to win a medal, so this is very disappointing. Although we were able to possess the ball after equalising the match, we weren’t able to create shooting opportunities, so our ability to score goals is an aspect we need to improve. After playing in Germany, I personally was able to keep my composure when I held the ball upfront. I need to become a striker who can help the team in these kinds of matches. 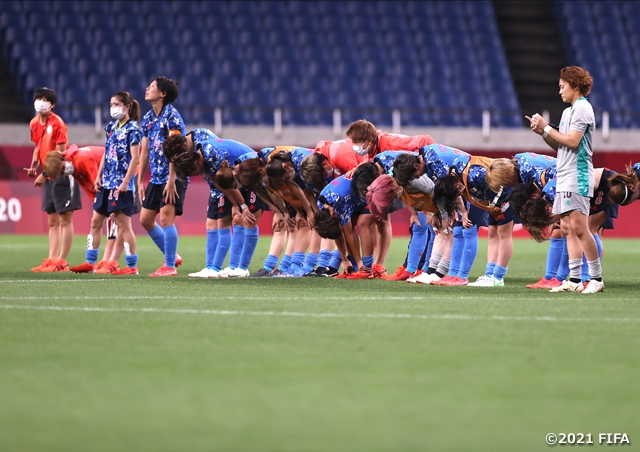