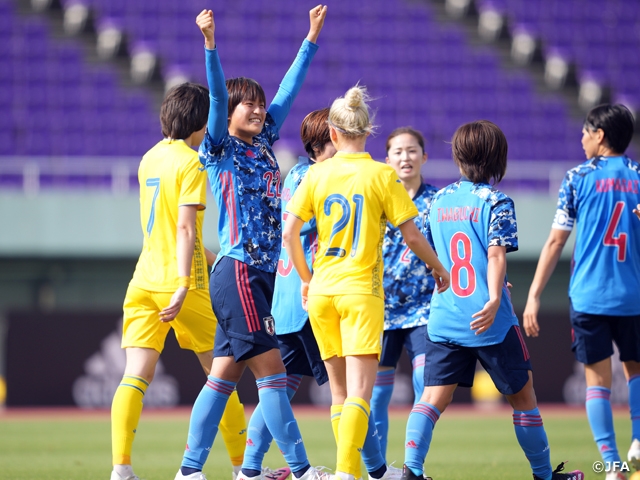 With the team entering their final preparation phase ahead of the Tokyo Olympics, coach TAKAKURA Asako made a few changes to their line-up, starting KITAMURA Nanami (Nippon TV Tokyo Verdy Beleza) in the left fullback position, while playing TAKARADA Saori (Washington Spirit) as a centre half. SHIOKOSHI Yuzuho (Mitsubishi Heavy Industries Urawa Reds Ladies) made her national team debut as the right midfielder.

Japan started off the match a little shaky, as they allowed Ukraine to exploit the open space behind their defence line to break through, but KUMAGAI Saki (FC Bayern Munich) was there to put out the fire. Just moments later, IWABUCHI Mana (Arsenal) forced a turnover deep in the opposing territory and started to carry the ball towards the goal. With the Japanese striker delivering a cut back towards the centre, SUGASAWA Yuika (Mitsubishi Heavy Industries Urawa Reds Ladies) dummied the ball to fake out the defenders, which allowed Shiokoshi to take a clean shot at goal and score her first goal with the Nadeshiko Japan.

Following the opening goal, Japan started to pick up their pace, as GK YAMASHITA Ayaka (INAC Kobe Leonessa) delivered quick and accurate feeds to initiate counterattacks, while HASEGAWA Yui (AC Milan) took control of the midfield to create chances. In the 30th minute, Iwabuchi struck a volley shot off a cross of NAKAJIMA Emi (INAC Kobe Leonessa) to score the team’s second goal. Takarada followed in the 38th minute, when she converted a delivery from a CK, marking her first goal as the member of the Nadeshiko Japan. With Shiokoshi scoring her second goal of the match at the end of the half, Japan entered the break with a 4-0 lead. 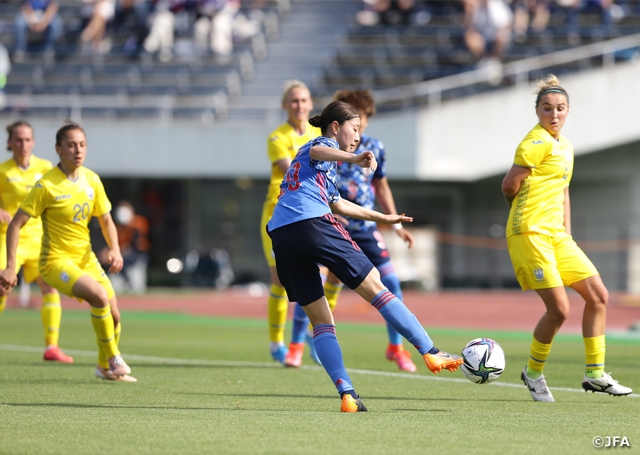 With momentum on their side, Japan continued to dominate the match. In the 58th minute, Hasegawa broke through the left side and delivered a cross to the far side. Shiokoshi redirected the ball inside the box to allow Iwabuchi to score her second goal of the match.

After taking a five goal lead, coach Takakura started to rotate their players, using all six substitutions allowed for this match. With fresh legs on the pitch, Japan went onto a goal spree, scoring three goals in the final 10 minutes of the match, as SUGITA Hina (INAC Kobe Leonessa), TANAKA Mina (Bayer 04 Leverkusen), and MOMIKI Yuka (OL Reign) each scored a goal in the 80th, 89th, and 90th minute, respectively.

Following the final whistle, it was announced that the referee crew in charge of this match, YAMASHITA Yoshimi (referee), BOZONO Makoto (assistant referee), and TESHIROGI Naomi (assistant referee), were appointed to take charge in the matches at the Tokyo Olympics, prompting a warm round of applause from the crowd. 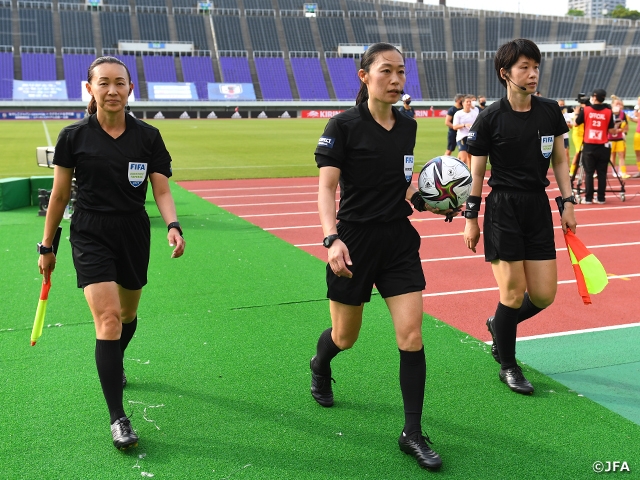 The Nadeshiko Japan will play their final match before announcing their Olympics squad against the Mexico Women’s National Team in the MS&AD CUP 2021 (Kanseki Stadium Tochigi) on Sunday 13 June.

TAKAKURA Asako, Coach of Nadeshiko Japan (Japan Women's National Team)
We are thankful to all the people who made this match possible despite the ongoing pandemic. We thank the players of the Ukraine Women's National Team for making the long travel and playing with great enthusiasm. We struggled to find our rhythm in the early minutes and allowed our opponent to create some close chances, but the players managed to make the necessary adjustments and started to take control of the match. It was great to see many players getting involved in the score column as well.

DF #22 TAKARADA Saori (Washington Spirit)
We entered the match poorly and allowed our opponent to create opportunities. I spoke with Kumagai and made sure that we weren’t allowing the opponent to exploit the space behind us anymore and to attack the ball aggressively when the opponent receives the ball. I was anticipating to score goals from our set-pieces, so I am glad I was able to score that goal. However, my passes were lacking accuracy today, so that is an aspect I must improve on.

MF #6 SUGITA Hina (INAC Kobe Leonessa)
When I entered the match, the team was struggling to get the ball through down the middle, so I focused on how I positioned myself. With the opponent dropping deep in their territory, I had to come up with creative ideas to break through the opposing defence line. I was eager to score a goal, so I am glad to score that goal. We will continue to prepare ourselves in the best way possible so that we can showcase another strong performance in our next match.

MF #19 SHIOKOSHI Yuzuho (Mitsubishi Heavy Industries Urawa Reds Ladies)
We were creating a lot of chances from the left side, and in the scene where I scored the opening goal, Iwabuchi delivered a wonderful cross and Sugasawa dummied the ball perfectly, so I just had to hit the target. Despite scoring two goals, I still need to improve my combinations with my teammates and be more aggressive in the one-on-one situations. With this being my first cap with the national team, I was able to gain a lot of things. I will continue to learn from my teammates and strive to become a better player.

FW #8 IWABUCHI Mana (Arsenal)
It was great that we were able to score eight goals, but there were many scenes where we couldn’t win the ball despite having enough players, so this match made us realise that we still need to strive for a higher level. However, we did manage to make adjustments and improve on our plays in the second half, so that is a positive aspect we can take back from this match. Everyone was focused on making quick transitions, and we saw some goals scored from our transition, but there were many plays were we needed to play more collectively, so that is something we need to work on ahead of our next match. 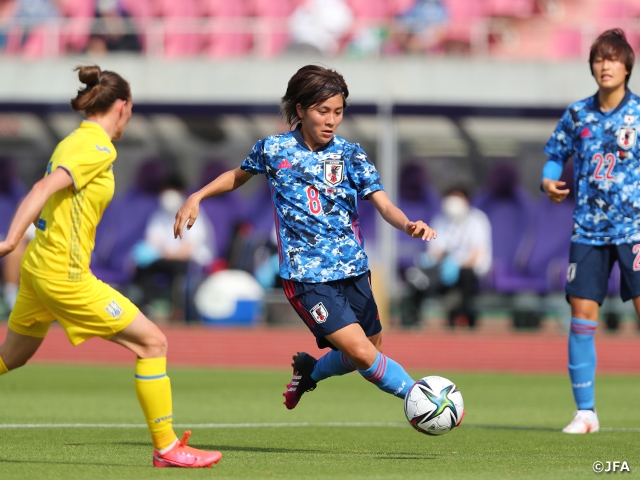