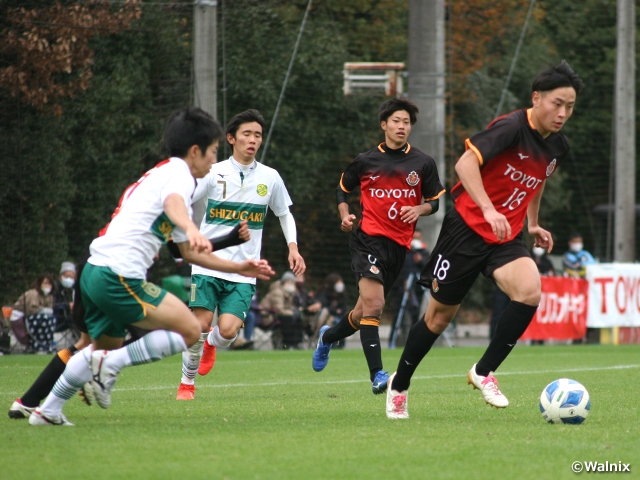 The match between two champions started with Shizuoka Gakuen taking the initiative, as they showcased spectacular teamwork to build their attacks. Although Nagoya made attempts to counterattack, Shizuoka Gakuen applied aggressive pressure to keep the home side at bay. In the 12th minute, Shizuoka Gakuen’s SHIMIZU Kazuma (#6) threatened the opposing goal with a FK attempt from distance, but Nagoya’s GK HIGASHI John (#1) was there to make the save. WATANABE Rearu (#7) and KOIZUMI Ryunosuke (#12) struck back to back shots from close range in the 23rd minute, but both attempts were denied by superb saves made by Higashi. 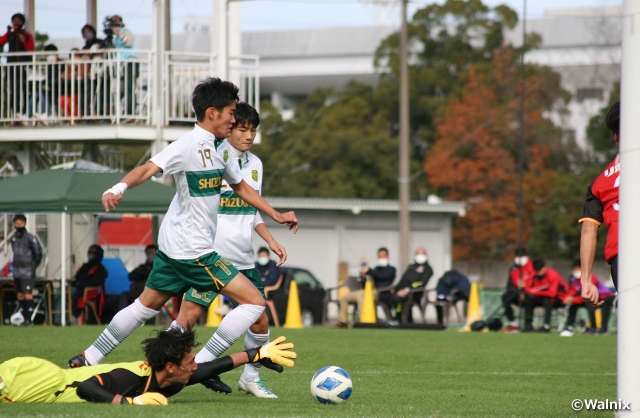 Despite the early efforts made by the Shizuoka side, it was Nagoya who scored the opening goal. In the 27th minute, YOSHIDA Haruki (#13) initiated the attack with a long feed from the defence line, allowing KATO Gen (#15) to deliver the ball to MITSUDA Shuto (#9), who made a run towards the goal and dribbled passed the GK to score the opener.

With momentum on their side, Nagoya dominated the second half, as they utilised the width of the field effectively. After recording just four shots in the first half, the home side started to make more attempts at goal, which led to the left footed shot taken by ISHIKAWA Shimma (#2) in the 60th minute, that pierced the left corner of the goal.

In efforts to change the dynamics of the match, Shizuoka Gakuen used their substitutes, but failed to stop the momentum of the Nagoya side, who is leading the group with an undefeated record. Nagoya’s late substitute, NISHI Rinsei (#15) scored the team’s third goal in the 90th minute to seal the match, as Nagoya clinched the top spot of group A with a 3-0 victory. At group B, Shimizu S-Pulse Youth (Shizuoka) has also clinched the group lead, as the two teams will face each other at the Tokai region championship on Saturday 12 December. 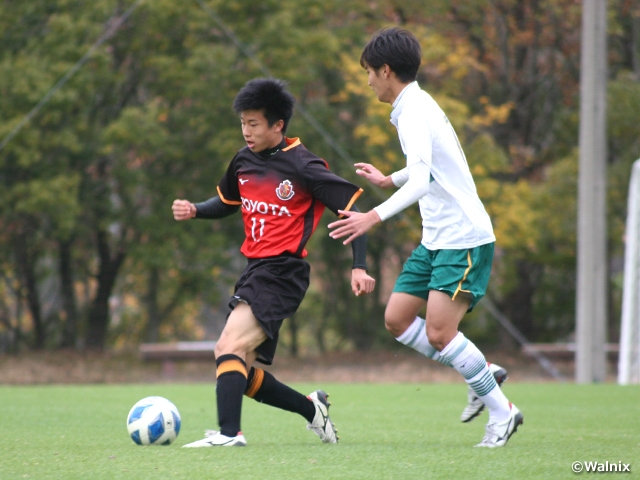 KOGA Satoshi, Coach (Nagoya Grampus U-18)
We were forced to be in the defensive end for the majority of the first half, and we couldn’t build up our offence. The players must have been frustrated, but they managed to keep their patience and communicated well on the pitch. We were able to make the necessary adjustments in the second half and started to find ways to initiate our attacks. Our goal for this season was to win two titles, the Tokai region championship, and the JAPAN Club Youth Football Championship. There are limited matches we can play this year, so we hope to raise the level of productivity at each match.

DF #3 SUMI Seiga (Nagoya Grampus U-18)
We were facing last year’s All Japan High School champions, so we entered the match with a strong intention to win against them. We have always struggled in the early minutes of the match, and even though we allowed our opponent to take the initiative, we stayed vocal and managed to keep a clean sheet, so that was a positive aspect of the first half. In the second half, we were able to initiate the action in both offence and defence, which allowed us to score goals. After winning the Premier League WEST title last year, we entered this season with the intention to win every single match. Shimizu S-Pulse has dominated group B, so we are definitely eying to beat them at the final.

KAWAGUCHI Osamu, Coach (Shizuoka Gakuen High School)
We managed to showcase our strengths and create many attacks in the first half, but couldn’t convert our chances, which turned out to be the big difference. Although we were completely dominated in the second half, our performance in the first half was probably one of the best halves in recent matches. Our players were devastated after losing at the prefectural qualifiers of the All Japan High School Soccer Tournament. It must have been hard for them to reset their minds, but I told them that their football career will continue to move forward, and they must move on for their own sake. During the first half, our players were able to do things we were not able to do in the past, so they showcased great improvements. It is okay to make mistakes, as long as they can reflect on those mistakes and make use of that experience in the next match.

DF #4 SEKINE Hiroki (Shizuoka Gakuen High School)
We were able to enter the match in great fashion but failed to score goals. Conversely, our opponent managed to convert their first major opportunity, and that was the difference in this match. After losing at the qualifiers of the All Japan High School Soccer Tournament, where we were aiming to win back to back titles, we all tried to reset our minds at our training sessions, as the seniors worked towards the next step of their career, while the first and second graders worked towards next year. I felt that we will be unbeatable, if we can play the way we played in today’s first half for the entire 90 minutes.