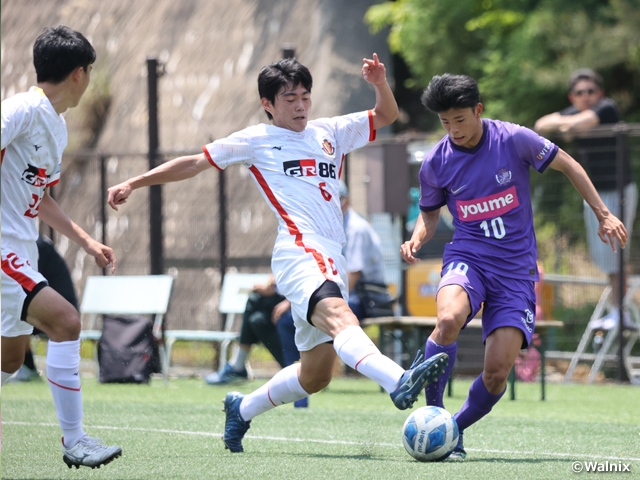 Entering the 2022 season as the defending champions of the WEST, Hiroshima had struggled mightily in the early going, starting their first six matches with one draw and five losses. With the team desperately seeking for their first win of the season, KASAGI Yuzu (#10) mentioned, “We reminded each other to keep our spirts up. We had conceded too many goals, so we worked on our defence all week.”

With their approach taking a positive effect, the home side took the initiative by showing their dominance to recover the loose balls, which led to the opening goal scored in the 11th minute. The goal came from a play initiated by KOSHIMICHI Sota (#11), who possessed the ball on the left side before passing the ball to NAKAGAWA Hagumu (#29). The striker then delivered a through-ball into the penalty area, in which Kasagi responded, as he later reflected, “I really wanted to help the team gain momentum by scoring the opener.” The midfielder timed his run perfectly, as he also mentioned, “We worked on our timing to make runs from the midfield, so I knew where the ball was coming,” and struck a powerful shot that pierced the near side of the goal to give Hiroshima the lead. 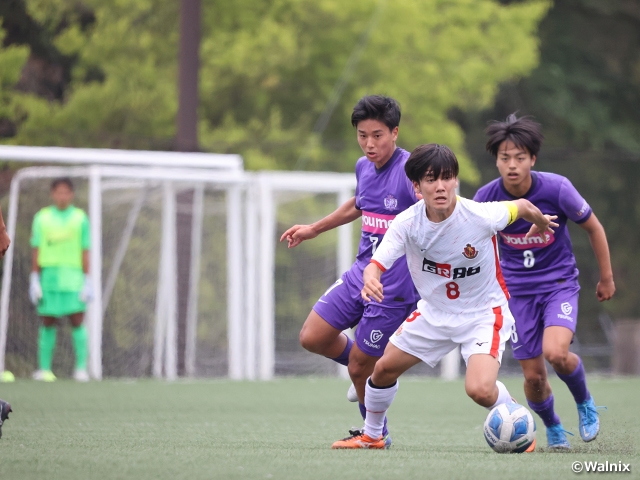 “Scoring the opening goal is the best way to get the team’s momentum going,” said coach TAKATA Tetsuya, as Hiroshima actively created opportunities in the attacking third, including the shot taken by Koshimichi in the 18th minute. Led by the quick responses of HATANO Ryota (#6) and WATANABE Yuta (#5), the home side showed great defensive coverage to keep the visiting side at bay.

In efforts to rally back, Nagoya introduced KIDA Ryoga (#10) and SUGIURA Shungo (#30) at the hour mark. With fresh legs added to their offence, the visiting side started to apply more pressure to the Hiroshima defence, leading to the close opportunities created by SUZUKI Haruto (#15) in the 61st and 64th minutes. After finishing the match without a goal despite initiating multiple opportunities with his dribbling skills, Suzuki later reflected, “This match reminded me that I have to improve the quality of my shots and my plays in the final third.” 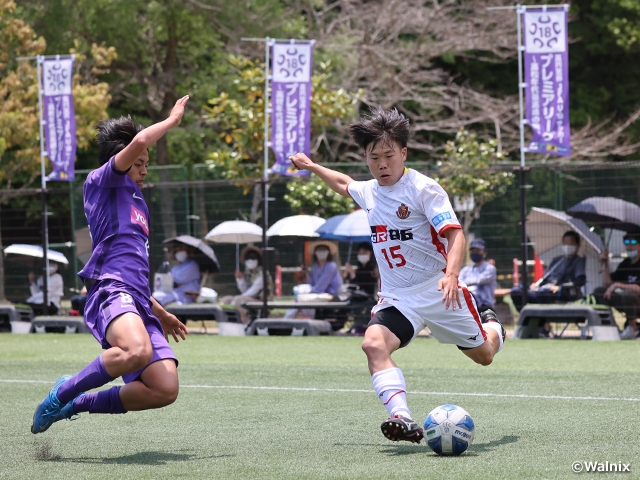 Hiroshima’s persistent defensive efforts prevailed in the 85th minute, when Kasagi struck a shot after receiving the pass from TSUNOKAKE Jo (#23). Although the shot was saved by the Nagoya goalkeeper, Nakagawa was there to convert the loose ball to double the lead for the home side. Despite conceding a goal to Nagoya’s UCHIDA Kosuke (#14) soon afterwards, Hiroshima kept their composure to take advantage of their opponent’s aggressive pursuit to equalise the match, as they exploited the space behind the opposing defence line to score back-to-back goals during additional time, earning their first win of the season with a final score of 4-1. 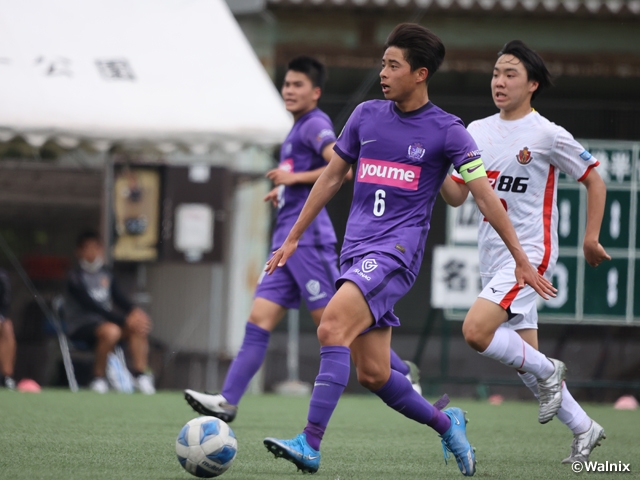 TAKATA Tetsuya, Coach (Sanfrecce Hiroshima FC Youth)
We would have been happy with a scoreless first half, but the fact that we were up 2-0 in the closing minutes was huge for us. At the same time, our team's weakness was exposed when we conceded a goal immediately after scoring the second goal. We might have been caught off guard, because this was the first time we scored two goals in a match this season. Today was a good way to release some of the frustration that had been building up. The last two goals were like a bonus for us, but nonetheless, it was a win that gives us confidence for our future matches. The fact that the players who deserve to score, such as our senior players and Nakagawa, gives us positive momentum moving forward.

DF #6 HATANO Ryota (Sanfrecce Hiroshima FC Youth)
In the past matches, we were not able to pressure the ball when the match opened up, which led to conceded goals, and our defence against set-plays was another aspect we had to improve on. The fact that we were able to do well in those two areas helped us win this match. It also helped that the entire team was communicating, not just the defence. We were able to play with a very good match with a positive vibe. We were also able to showcase a total team effort in defence, which is the Hiroshima way of playing football. We will make the most of this win and try keep the momentum going.

KOGA Satoshi, Coach (Nagoya Grampus U-18)
We were overwhelmed by our opponent’s pressure at the beginning and didn’t have the strength to push back. We managed to make better decisions towards the end of the first half, as we started to use the width of the field to avoid the opponent’s pressure but couldn’t create enough chances to turn the match around. This match against Hiroshima gave us a great learning experience, including the way they anticipated for the loose balls. This match required tremendous amount of efforts and toughness, which is what the Premier League is all about.

MF #8 USUI Seiryu (Nagoya Grampus U-18)
Usually, we are aware of the opponent’s weaknesses and make plays to exploit their flaws from the first half, but today we could not apply enough pressure on their ball holders. The fact that we allowed our opponents to win the loose balls gave them the initiative and ultimately the win. We were overwhelmed by our opponent’s momentum and couldn’t execute our game plan. It was very disappointing that we couldn’t demonstrate our usual aggressiveness.

Despite conceding the opening goal to Riseisha High School (Osaka), Jubilo Iwata U-18 (Shizuoka) came back in the second half with the brace of GOTO Keisuke (#17) to win the match. Vissel Kobe U-18 (Hyogo) won their home match against Shimizu S-Pulse Youth (Shizuoka) 2-0, thanks to the goals of TOMINAGA Nina (#9) and NAGASAWA Mikaze (#10). Sagan Tosu U-18 (Saga) extended their winning streak to five matches with a 5-1 victory over Gamba Osaka Youth (Osaka). The matches between Shizuoka Gakuen High School (Shizuoka) and Higashi Fukuoka High School (Fukuoka), Ozu High School (Kumamoto) and Cerezo Osaka U-18 (Osaka) were postponed.