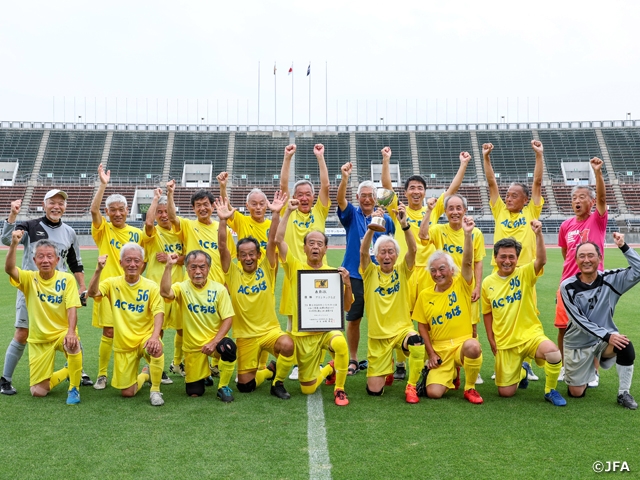 The final round of the JFA 16th O-70 Japan Football Tournament took place on Monday 20 June.

One of the semi-final fixtures featured two teams who advanced through the group stage with a perfect record, as Hyogo Prefecture 70 Select Team (Kansai/Hyogo) squared off against Iwate 70 (Tohoku/Iwate). The match started with Hyogo taking the initiative from the 10th minute onwards but led by the superb saves made by their goalkeeper OMI Yuko, Iwate managed to keep the game scoreless in the first half. However, Hyogo went onto a goal spree in the second half, starting with the goal scored by KOSHIISHI Shigeyoshi in the seventh minute, followed by two more goals scored in the 12th and 16th minute, as the Hyogo advanced to the final with a 3-0 victory. 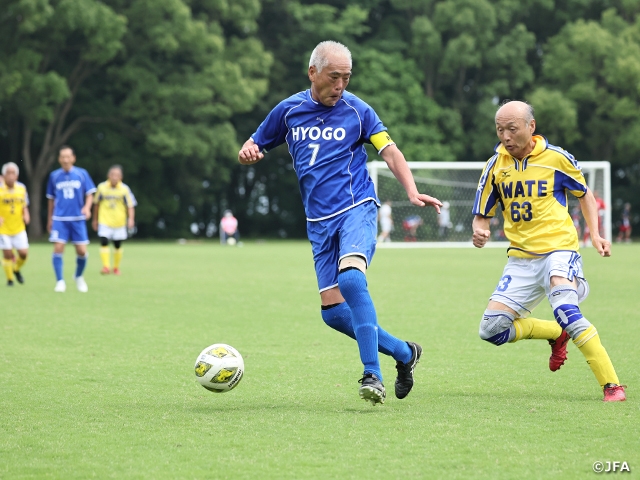 The other semi-final match was played between Shizuoka Prefecture Select Team O-70 (Tokai/Shizuoka) and Athletic Chiba (Kanto1/Chiba), who reached the final round with the best record among the second-place finishers in the group stage. After the match went scoreless in the 30-minute regulation time, Athletic Chiba claimed their ticket to the final with a 5-3 victory in penalties.

The final saw Athletic Chiba effectively utilise the width of the field to take the initiative in the early minutes. However, Hyogo started to rally back in the closing minutes of the match. With the thought of another penalty shootout flickering through their minds, Athletic Chiba had introduced their goalkeeper WADA Shiro, who came into the match as a substitute and made a save in penalties at the semi-finals, to start the second half, but there was a dramatic twist during additional time of the second half. With very little time left to play, Athletic Chiba's MASUDA Hitoshi received the ball just outside the penalty area, superbly controlled the ball to evade the pressure of two defenders and struck a right footed shot that found the back of the net. After losing to Hyogo by a late goal in the first round, Athletic Chiba won their second meeting in the tournament with a dramatic goal to be crowned as the inaugural champions of the O-70s category. 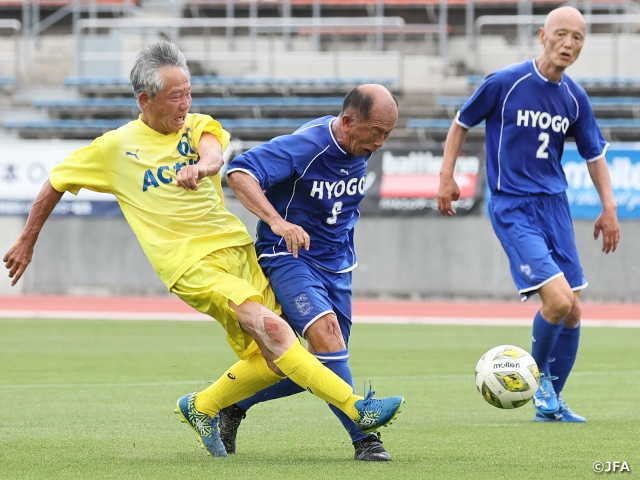 NITANAI Kunio, Player-Coach (Iwate 70)
We played well at the beginning of the match, but our opponents were simply stronger than us. The O-70 tournament used to be played one match per day, but this time there were two matches, so we were exhausted on the third day. Even so, Hyogo ran hard until the end, so we too, must work harder. It must have been difficult to organise the tournament during this time of the pandemic, but we thank everyone for making this tournament possible. I will soon be 80, and each year after 75 becomes even more significant. For a person in his 70s, I feel so fortunate to be able to play against so many different teams on such a great pitch.

OKANAKA Masayasu (Hyogo Prefecture 70 Select Team)
We were working very well as a team, so we really wanted to win, but we ran out of steam in the end. We were in the same group with Chiba in the first round, where we managed to win against them by scoring in the last two minutes, but this time they turned the tables on us. I have played against Chiba's goalkeeper Wada Shiro since we were in our 20s. There are people like that on various teams, and it's fun to see them at these national competitions. I feel it even more so because we didn't have this tournament for two years. I will continue to work hard and try to come back to this tournament next year.

AKITA Shinya (Athletic Chiba)
I really enjoy making new friends at these competitions. Especially because, it is very difficult to find opponents when you are over 70 years old. This year, we got on well with everyone from Hyogo. We were lucky to have won the title. We were fortunate from the moment we reached the finals after finishing the first round in second place. This year, the team was just entering a generational change, so the team was led by young players in their early 70s. It was the first time for this tournament to be played out to determine the champions, so we became the inaugural champions. I feel very blessed, especially after being crowned as the inaugural O-60 champions in the past.

MASUDA Hitoshi (Athletic Chiba)
After winning through the semi-finals in penalties, we really wanted to win the final by scoring the decisive goal. The opponents were marking our attackers really closely, so we were anticipating to make runs from the midfield, and I feel like I was able to capitalise on the few chances we had. My teammates had told me during halftime, that they had a feeling that I would score a goal, so I am glad I was able to make that a reality. I wasn’t calm at all when I scored the goal. I was marked by two opponents and the goalkeeper was coming out, so I just took my chance.