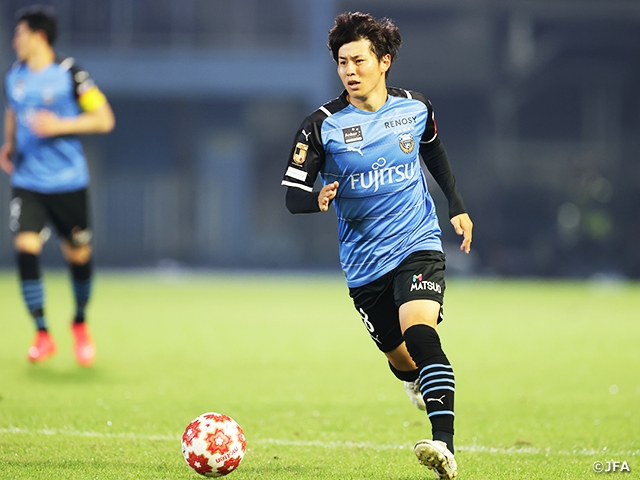 Kawasaki Frontale (J1), who is on the verge of winning the J1 title for the second year in a row, has shown their dominance in their pursuit of defending their title at the Emperor’s Cup, as they defeated Kashima Antlers (J1) 3-1 at the quarterfinals.

Led by IENAGA Akihiro, Kawasaki showcased great ball movements to take control of the match, and took the lead in the 32nd minute, when the corner kick delivered by WAKIZAKA Yasuto induced an own goal. With momentum on their side, Kawasaki extended their lead in the early minutes of the second half, as Wakizaka assisted the goal of HATATE Reo in the 48th minute, before scoring a goal with his left foot in the 51st minute. The 26 year old midfielder who was involved in all three goals mentioned after the match, “It was great that we were able to win in 90 minutes. Kashima is a defensively solid team, so the fact that we managed to score multiple goals against them gives us great confidence.”

Despite the late surge made by Kashima, the match ended 3-1, giving Kawasaki the ticket to the semi-finals. With this loss, Kashima will end the season without winning a title for the third consecutive season. ARAKI Ryotaro, who scored Kashima’s only goal in this match, shared his disappointment, “It is really frustrating to be eliminated in all title race.”

Kawasaki will now face Oita Trinita (J1) in the semi-finals on 12 December. Following the match, coach ONIKI Toru commented, “We were able to showcase our determination to win the title,” while Hatate mentioned, “I can help the team win by making runs. I will continue to give my best effort to help the team win the two titles (J1 season title and Emperor's Cup).” 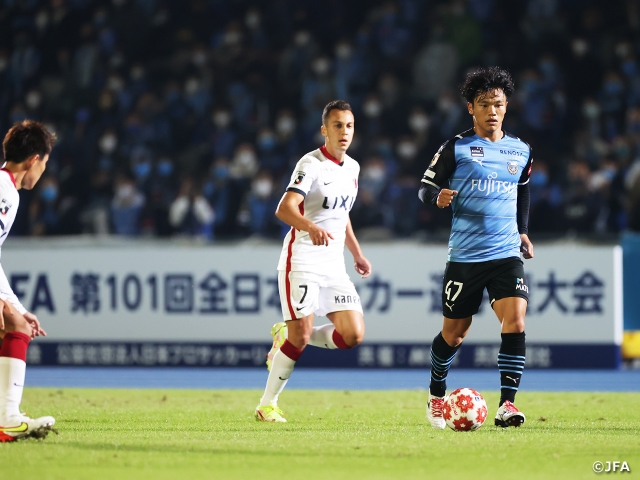 ONIKI Toru, Coach (Kawasaki Frontale)
Despite the congested match schedule, the players showcased a wonderful performance. We wanted to dominate the match from start, and I think we did a really good job in all aspects of the game, including work ethic, ball control, and transition. The fact that we were able to score a goal in the first half, and extend the lead in the second half, showcased our determination to win the Emperor's Cup title.

WAKIZAKA Yasuto (Kawasaki Frontale)
I've been able to play with a lot of confidence in the recent matches, initiating the offence and getting involved in the team’s goals. I am glad that I was able to contribute to the team’s victory today. With the match being scheduled just three days following our previous match, we knew this was going to be a tough match, but I think we were able to prepare well and play with great intensity. As for the goal, it went where I wanted it to go, and I am glad to be able showcase what I have been working on in practice.

SOMA Naoki, Coach (Kashima Antlers)
The Emperor's Cup was our final opportunity to win a title this year. We have been preparing with an emphasis on winning, but that approach might have made us play a bit passively today. As a result, Kawasaki took advantage of our passive plays to score goals against us. The early goals we conceded in the second half really demoralised us.

ANZAI Koki (Kashima Antlers)
The entire team was fully determined to win this title, so this is a very disappointing result. We were not able to apply pressure in the first 15 minutes of the match. Our opponent showcased great attacks to exploit our defence and they were simply the better team today. 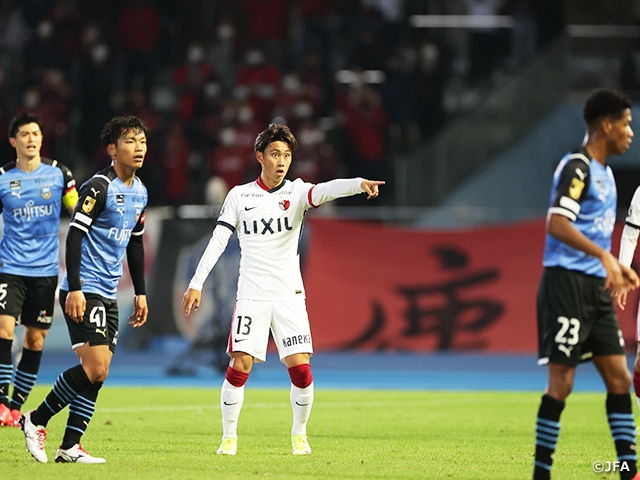