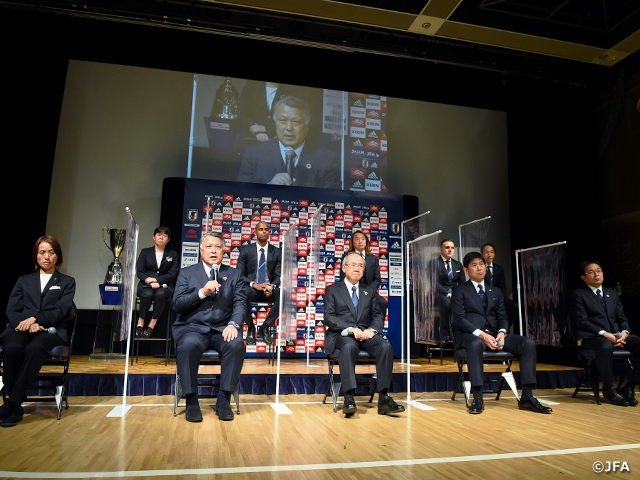 After being postponed for a year due to the effects of COVID-19, both men’s and women’s football competitions at the Tokyo Olympics are scheduled to take place on Thursday 22 and Wednesday 21 July, respectively. Although all categories of the Japan National Team were restricted with their activities this year, coach MORIYASU Hajime, who is the head of both the SAMURAI BLUE and the U-24 Japan National Team, commented, “With the tournament being postponed for a year, we were given an additional year to prepare ourselves, which allowed us to improve both as a team and as individuals.” The coach went onto share his aspiration for the Olympics, “We will strive to achieve our goal of winning the gold medal.”

The U-24 Japan National Team is scheduled to play in six matches ahead of the Olympics, including four international matches; Friday 26 March at Tokyo Stadium, Monday 29 March at Kitakyushu, Saturday 6 June at Oita, Saturday 12 June at Toyota, Aichi, and two matches at the KIRIN CHALLENGE CUP 2021; Monday 12 July at Nagai, Osaka, and Saturday 17 at Kobe. The opponent of each match will be announced following April’s drawing ceremony for the Olympics. 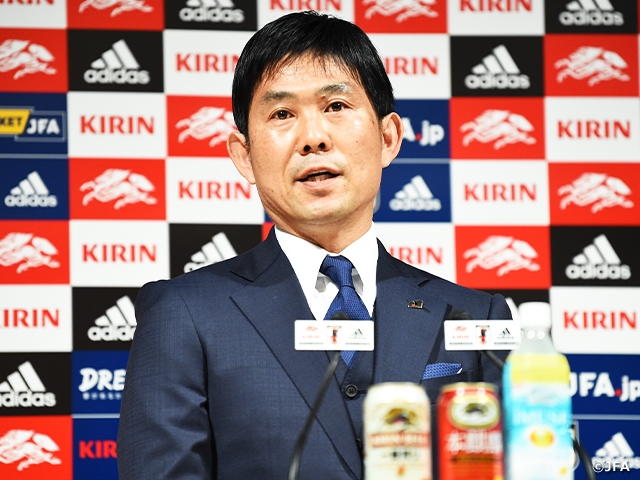 After missing the 2016 Olympics, the Nadeshiko Japan will make their return to the Olympics since 2012, when they won the silver medal. The team will hold training camps each month before traveling to the USA (Sunday 14 to Friday 26 February) where they willl participate in the SheBelieves Cup. Four international friendly matches are currently lined up for the team; Thursday 8 April at Sendai, Sunday 11 April (location TBD), Thursday 10 June at Hiroshima, Sunday 13 June at Tochigi, before playing in the send-off match at Kyoto on Wednesday 14 July.

The Nadeshiko Japan has held domestic training camps in both November and December. With the team entering the 10th year since winning the FIFA Women's World Cup in 2011, coach TAKAKURA Asako of the Nadeshiko Japan shared her aspiration ahead of the upcoming Olympics, “We have many young players who are showing great improvements each day. We have nothing but high hopes for the Olympics.” 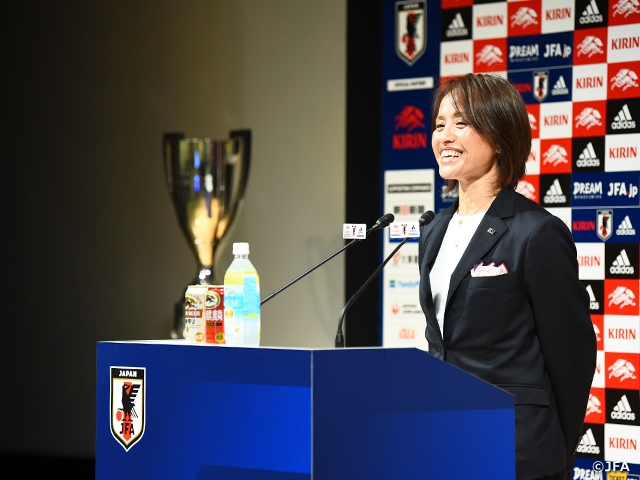 After being postponed due to the effects of COVID-19, the second round of the FIFA World Cup Qatar 2022™ Asian qualifier is scheduled to resume in March. The SAMURAI BLUE will compete in the second round until June, followed by the final round in September. Before the competition was postponed, Japan has won all four matches played until November 2019, leading Group F with 12 points. Despite playing one less match than the other four teams, Japan currently holds a five point lead against second place Kyrgyz Republic and third place Tajikistan.

For the SAMURAI BLUE, group stage action will resume on Thursday 25 March, when they face Myanmar at Nissan Stadium. Following their away match against Mongolia on Tuesday 30 March, the team will face Tajikistan and Kyrgyz Republic at Panasonic Stadium Suita in Osaka on Monday 7 and Tuesday 15 June, respectively. Ahead of each qualification match held in June, the team will compete in the KIRIN CHALLENGE CUP 2021, where they will play international friendly matches on Thursday 3 and Friday 11 June at Sapporo and Kobe, respectively (opponents to be announced). This year’s international match days are set for late August to early September, mid-October, and mid-November, and the final round of the FIFA World Cup Qatar 2022™ Asian qualifier is expected to take place during these dates. With the team striving to qualify for the seventh consecutive World Cup, coach Moriyasu shared his strong determination for the qualifiers, “We will make sure to advance through the second round and stive to win each match at the final round.”

Ahead of the FIFA Futsal World Cup Lithuania 2021™, which will take place from 12 September, the Japan Futsal National Team will enter Kuwait to compete at the AFC Futsal Championship starting Tuesday 23 March. Despite being limited with their team activities this year, coach Bruno GARCIA shared that the team has worked with the motto, “making improvements with a once-in-a-lifetime spirit.” Through this approach, the coach mentioned that his team has improved and hopes to utilise the team’s new abilities to win the AFC Championship and earn their ticket to the World Cup.

The Japan Beach Soccer National Team will be competing for their ticket to the FIFA Beach Soccer World Cup Russia 2021™ at the AFC Beach Soccer Championship held in Thailand from Wednesday 28 April. Last year, the team entered the World Cup as the Asian champion and reached the semi-finals, as their player-coach MOREIRA Ozu shared his aspiration, “We will win the qualifier and surpass our result from last year’s World Cup. Just like the Nadeshiko Japan, we hope to win the world title and vitalise the beach soccer community.”

MORIYASU Hajime, Coach of SAMURAI BLUE (Japan National Team)
Despite the ongoing pandemic, with the support of many people, the SAMURAIBLUE was able to conduct tours to the Netherlands and Austria in October and November. We are also given the opportunity to conduct a training camp for the Tokyo Olympics, starting from 21 December at YUME Field. We did not think we would be able to carry out any more activities this year, so we hope to make the most of this opportunity and give our best efforts to prepare ourselves ahead of next year. Raising the level of the national team is one thing, but I have always told the players to focus on raising the individual level at their respective clubs, and I will continue to take that approach.

TAKAKURA Asako, Coach of Nadeshiko Japan (Japan Women’s National Team)
Through the tireless efforts of so many people, we were able to conduct training camps in both November and December. The players played lively on the pitch and expressed their joy of playing football. It really showed their enthusiasm towards the Tokyo Olympics, gratitude towards their given environment, and awareness towards their responsibility to keep the “Nadeshiko vehicle” moving. We will be facing many adversities, but the players of Nadeshiko will fight until the very last second. We will continue to make forward progress, while believing in ourselves that we can win the gold medal.

Bruno GARCIA, Coach of Japan Futsal National Team
This year was a very difficult year, but it allowed us to build the team’s fighting spirit and unity. It is wonderful to see that the team can still improve under these harsh situations, and our positivity has led to the team’s growth. All and all, the team has got stronger from last year. We strongly believe that 2021 is going to be a good year for us.

MOREIRA Ozu, Coach of Japan Beach Soccer National Team
We feel fortunate that we were able to conclude our activities during these tough times. Next year is a World Cup year, and ahead of the tournament in Russia, we hope to unify the young players and the veterans to build a strong team. I will utilise the experience I gained overseas, and the player-coach experience I gained at my club to find new talents, provide opportunities for the players to improve, and build a strong team.

SORIMACHI Yasuharu, JFA Technical Director
With next year being the 100th anniversary year for JFA, we hope to leave a strong impression to the world. Ahead of the World Cup in Qatar, the SAMURAI BLUE needs to showcase a dominating performance at the second round of the Asian qualifiers and prove at the final round in September that Japan is the number one team in Asia. In order to do so, we will provide opportunities for the team to improve at the KIRIN CHALLENGE CUP. The U-24 Japan National Team will be striving to win the gold medal at next year’s Olympics. We hope that the players will thrive at the Olympics and become additional force that can help the SAMURAI BLUE when they enter the final round of the World Cup.

IMAI Junko, Chair of JFA Women's Committee
Nadeshiko Japan’s goal is to win the gold medal. Through the USA tour and training camps held in Japan, we will prepare the team to the finest detail. In addition, the WE League will kick-off this autumn. The national team and the WE League are the two wheels that carry the development of women’s football in Japan, so we hope to earn solid results at the Olympics and get the WE League off to a successful start, so that we can build a positive momentum ahead of the Asian Cup, which will serve as the qualifier for the Women’s World Cup. We are committed to make this year a major turning point for the development of women’s football in Japan.

KITAZAWA Tsuyoshi, Chairman of JFA Futsal Committee
Although this was a very tough year, the establishment of the YUME Field allowed the players to continue to play football and pursue their dreams. Through adversity, we were able to build strong teams this year, so we hope to make the most of it next year. We are striving to reach the quarterfinals at the Futsal World Cup, while the Beach Soccer National Team is aiming to reach the semi-finals in every tournament they participate this year. This year we made a transition to a new system. We have been working to build an extensive player base to allow the national teams to continuously showcase their best performance. In order to achieve the team’s goal, we have also appointed a coach that is well-versed in the trends of beach soccer, allowing the team to conduct trainings at a high level.

TASHIMA Kohzo, JFA President
In 2021, JFA will enter its 100th anniversary year. The Tokyo Olympics will be held during this memorial year, and the WE League, Japan’s first ever professional women’s football league, will also kick-off this year. It has been exactly 10 years since the Nadeshiko Japan won the FIFA Women’s World Cup, and we are hoping to see the Nadeshiko Japan and U-24 Japan National Team showcase the “Japan’s way” at the Olympics. We hope to bring courage, hope, and excitement to many people.

The Asian qualifiers for the World Cup will resume for the SAMURAIBLUE, who has seen many young talents develop through the one year postponement. With the help of these new talents, we strongly believe that the team will earn its way into the FIFA World Cup Qatar 2022™. Men’s U-20, U-17, futsal, and beach soccer national teams will all enter a World Cup year. We hope each team will win through their respective AFC Championship and strive to make deep runs at the World Cup.

With 2021 being an Olympic year, it gives us a unique opportunity to convey the value of sports and develop sports culture. While each category of the Japan National Team will strive to showcase spectacular football, we will also disseminate new ways to enjoy football through IT technology, as we hope to provide platforms to interact with players and contents that can be enjoyed by people who cannot come to the stadium.