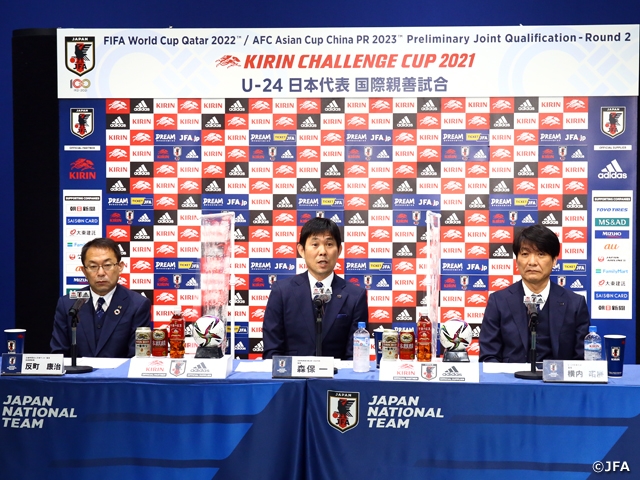 With the match against Myanmar being held before the international match day set by FIFA, players belonging to clubs in the J.League are unable to attend the match, therefore the squad consists of 26 players playing overseas. Following the match, 12 players will join the U-24 squad including YOSHIDA Maya (U.C. Sampdoria), SAKAI Hiroki (Olympique de Marseille), and ENDO Wataru (VfB Stuttgart) who will be added to the squad as “Over-age” players. 10 players from the J.League will then be added to the senior squad ahead of the four matches scheduled in June.

Coach Moriyasu will be in charge of the SAMURAI JAPAN, while coach YOKOUCHI Akinobu will lead the U-24 Japan National Team.

Ahead of the upcoming qualification matches coach Moriyasu shared his aspiration, “We hope to clinch our spot into the final round by winning against Myanmar and finish off the second round on a high note by winning the remaining matches.” The coach also mentioned about the two friendly matches against Jamaica and Serbia, “They are both wonderful teams. We will strive for victory and try to make the most of this experience to raise the overall level of the team.”

The coach also shared his thoughts about the over-age players, “I want these three players to help the team at the Olympics.” And continued to state, “All three players will bring extraordinary talent and experience to the team. They will have great influence on the young players and allow us to grow as a team.”

With this being the final team activity before finalising the roster for the Olympics, coach Moriyasu mentioned, “These matches will not only serve as a try-out session for the Olympics, but an opportunity to strengthen the team, including the over-age players. In order to be selected into the final roster, I want the players to showcase what they have been working on in the past years.” 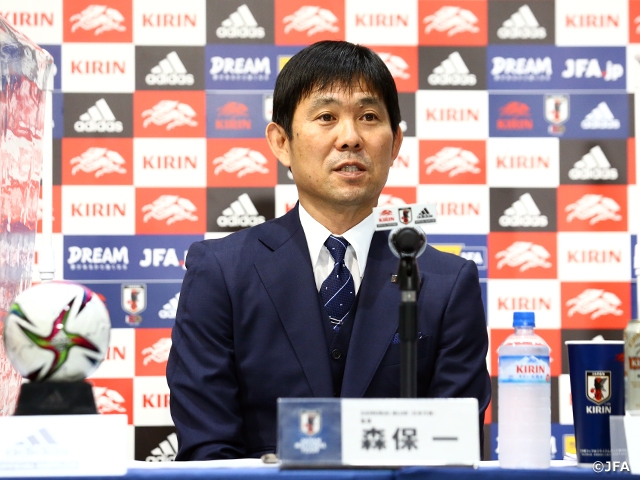 Coach Yokouchi also shared his expectations for the players, “There are always competitions within the team, and we will determine the line-ups based on those competitions. No one is guaranteed to start.”

The Tokyo Olympics is scheduled to kick-off on 22 July, and Japan is grouped with South Africa, Mexico, and France. Regarding their friendly match against the U-24 Ghana National Team, coach Yokouchi mentioned, “African teams are capable of making unpredictable plays, so this match will give us a great opportunity to prepare ourselves ahead of the Olympics.” 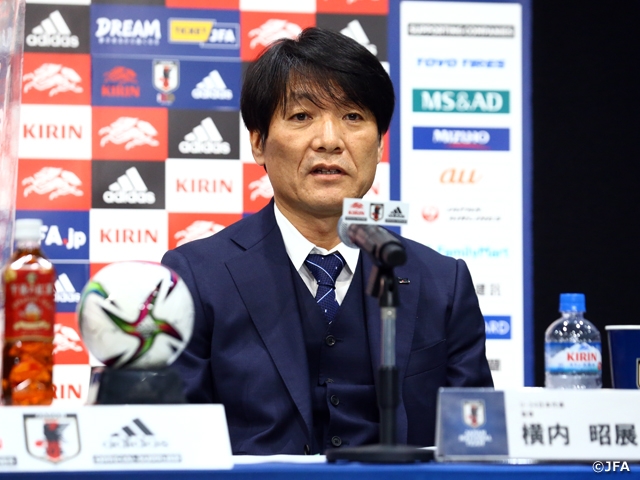 The SAMURAI BLUE will start its training camp on 24 May. The team will restructure the squad after their match against Myanmar before holding another training camp starting 29 May. The activities of the U-24 Japan National Team will start on 31 May.

MORIYASU Hajime, Coach of SAMURAI BLUE (Japan National Team)
We are grateful to be given the opportunity to continue with our activities during this pandemic, and we are thankful to all the people who are making these matches possible. Through football, we hope to deliver dreams, hope, energy, and courage to those watching our matches.

We will strive to advance through the second round by winning our match against Myanmar and use the remaining matches to raise the overall level of the team ahead of the final round. We are also given a wonderful opportunity to face Jamaica and Serbia, so we will try to make the most of these matches to strengthen the team. In order to keep the team on the same page, we must go over our strategy, concept, and the fundamental aspects during the training sessions, and demand the players to execute the game plan against any opponent.

Upon making our decisions for the over-age players, we listed potential players for every position and spoke with the players and clubs for the possibility. All three of these players will bring extraordinary talent and experience to the team. They will have great influence on the young players on and off the field, and allow us to grow as a team. They will also allow us to build our offence from the GK position, have influence in both offence and defence, and bring out the best of the young players with their leadership. The Olympics has its unique atmosphere, which is different from the World Cup. We must play through six matches with an 18-man roster, which is very different from what we are used to at other national team competitions, but these over-age players should provide insights of this unique competition to the younger players.

YOKOUCHI Akinobu, Coach of U-24 Japan National Team
Despite the ongoing pandemic, we are grateful to all the people who has made these international friendly matches possible. We have very limited time before the Olympics. That is why we must prepare ourselves to the fullest and try to make the most of these matches. The U-24 Ghana National Team consists of players with great athleticism and creativity. Players playing abroad may have the experience of facing African players, but this would provide a rare opportunity for players playing in Japan.

SORIMACHI Yasuharu, JFA Technical Director
There is no doubt that the Japan National Team is in great position at the second round of the World Cup qualifiers. We have been preparing ourselves so that we can clinch the final round in our next match against Myanmar, so this is a crucial match for us, and I am sure the players will feel the same way when they report to the training camp. Despite the ongoing pandemic, we are able to continue with our activities with the support of the Japanese government, Japan Sports Agency, our sponsors, and many other people involved, so we would like to take this time to express our gratitude. Thank you very much. We will try to give back with our performance on the pitch and continue to strive to become a better team ahead of the final round.

With the Olympics fast approaching, this will be the final try-out session for the U-24 Japan National Team, so we must make the most of this opportunity. The SAMURAI BLUE will be playing during the same time period, so we will entrust coach Yokouchi to make the most of these two matches ahead of the Olympics. Although the U-24 side will have less time compared to the SAMURAI BLUE, we are hoping that they can use their time effectively and build a strong team that can earn a medal at the Olympics.

In regard to the over-age players, we must obtain the consent of the players’ clubs to include them into the squad for the Olympics. That is why we had the JFA staffs, who are stationed in Europe, talk to each club, and obtain consent for the players’ participation. With that in mind, I am very pleased that these three players will be able to work with the U-24 Japan National Team from June. 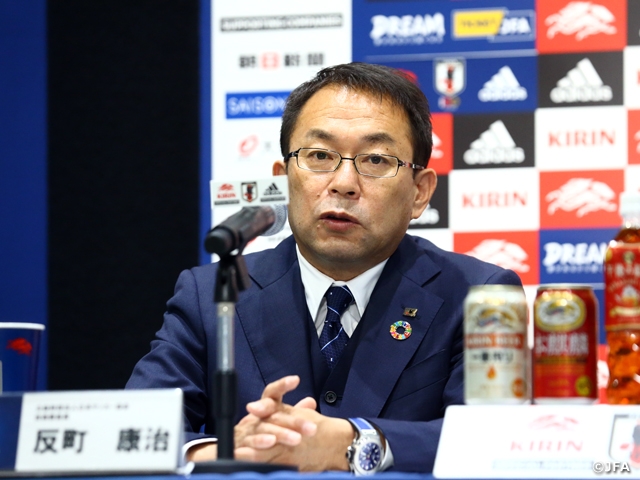