JP
HOME > SAMURAI BLUE > NEWS > SAMURAI BLUE aiming to win the title and build team depth, while Nadeshiko Japan seeking to defend title by raising the base of the team at the EAFF E-1 Football Championship 2022 Final Japan

SAMURAI BLUE aiming to win the title and build team depth, while Nadeshiko Japan seeking to defend title by raising the base of the team at the EAFF E-1 Football Championship 2022 Final Japan 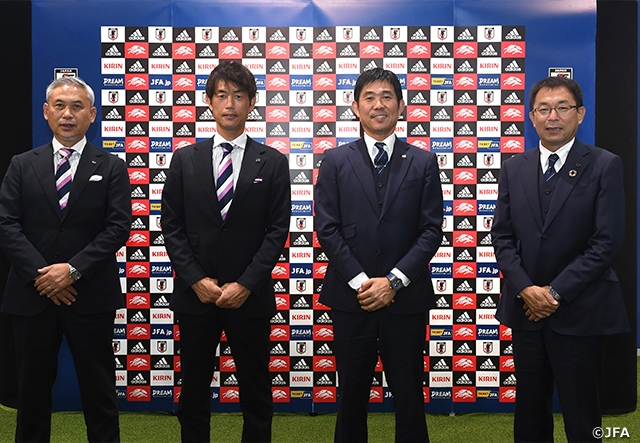 Ahead of the EAFF E-1 Football Championship 2022 Final Japan, which will kick off on 19 July, the squads for both the SAMURAI BLUE (Japan National Team) and the Nadeshiko Japan (Japan Women's National Team) were announced on Wednesday 13 July. The SAMURAI BLUE will aim to win the title and strengthen its squad for the FIFA World Cup Qatar 2022™ in November, with fresh faces including 10 first-time selections and MIYAICHI Ryo (Yokohama F. Marinos), who is returning to the national team for the first time in almost 10 years. The Nadeshiko Japan consist mainly of those who participated in the European tour in June and will try to build up their foundation to defend the title.

The SAMURAI BLUE have called up 26 players to match the FIFA World Cup™ roster. Because the tournament is held outside of FIFA's international match period, players belonging to clubs outside of Japan will not participate, making this a valuable opportunity for those who play in the J.League to make a case for themselves for the FIFA World Cup Qatar 2022™.

SAMURAI BLUE’s Head Coach MORIYASU Hajime mentioned, “Our goal for the EAFF E-1 Football Championship is to win the title. We hope to build depth of our team and head into the World Cup with solid results and performance.”

Five players who experienced the AFC Asian Qualifiers (Road to Qatar) in March this year were selected, including TANIGUCHI Shogo (Kawasaki Frontale), YAMANE Miki (Kawasaki Frontale), and SASAKI Sho (Sanfrecce Hiroshima), while the rest of the team mainly consist of first time call-ups and players making their return to the national team for the first time in a long time. Seven players were selected from Yokohama F. Marinos, who are currently leading the J.League, and six players were selected from Sanfrecce Hiroshima, who are in fourth place.

The oldest among the first time call-ups is 32 year old MIZUNUMA Kota (Yokohama F. Marinos), who has not represented Japan since the Toulon Tournament in May 2012, when he participated as a member of the U-23 Japan National Team. He follows his father, Mr. MIZUNUMA Takashi, to become a pair of father and son to be named into the Japan National Team.

Among the returnees, Miyaichi returns to the national team for the first time since 16 October 2012, when he played in an international friendly against Brazil. Miyaichi made his debut for the national team in May 2012 at the age of 19 and continued to play in Europe from December of that year, where he struggled with injuries for an extended period, before joining the Marinos in the summer of last year. This season, he has made 14 league appearances and has sparked the team's attack with his blistering speed. IWATA Tomoki (Yokohama F. Marinos) and SUGIOKA Daiki (Shonan Bellmare) were selected for the first time since the CONMEBOL Copa America in June 2019, while MUTO Yoshinori (Vissel Kobe), who will wear number 10, will also be making his first appearance for the national team since the 2019 AFC Asian Cup.

Seeking for their second EAFF E-1 Football Championship title since winning their first in 2013, Japan will play Hong Kong on 19 July, followed by China PR on 24 July, and Korea Republic on 27 July, who will be seeking for their fourth consecutive and sixth overall title. The first match will be played at Kashima Soccer Stadium, while the remaining matches will be played at Toyota Stadium in Aichi.

The SAMURAI BLUE will begin training on 17 July.

Ahead of the tournament, coach Moriyasu mentioned, “I want the new players to gain international experience, compete for the title, and further develop their strength and value as a player.” 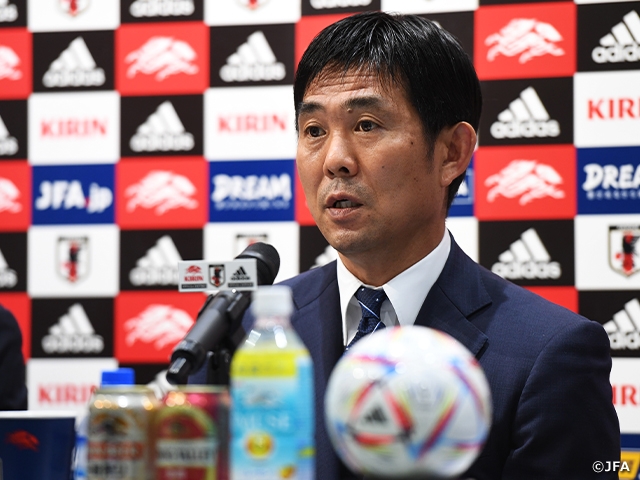 Regarding his selection, coach Ikeda mentioned, “We want to raise the overall level of the team ahead of the FIFA Women's World Cup™ in July next year. We want to build on what we have been working on as a team, while assessing the individual players from the perspective of whether or not they can compete at the international level.”

The number 10 will be worn by NAGANO Fuka, who announced her transfer to the North Carolina Courage of the National Women's Soccer League in the USA the day before the squad was announced.

Seeking to defend their title and to win their fourth overall EAFF E-1 Football Championship title, the Nadeshiko Japan will face Korea Republic on Tuesday 19 July, followed by Chinese Taipei on Saturday 23, and China PR on Tuesday 26, all at Kashima Soccer Stadium. Having drawn with Korea Republic in the group stage and lost to China PR in the semi-finals of the AFC Women's Asian Cup India 2022™ in January this year, the competitions are bound to be heated.

Ahead of the tournament, coach Ikeda shared his take, “The players have suffered a bitter experience, so I'm sure they will use it as motivation to perform well this time around,” while also mentioning, “We want to try and prepare to respond against opponents who are anticipating to initiate counterattacks.”

The Nadeshiko Japan will start training on Thursday 14 July. 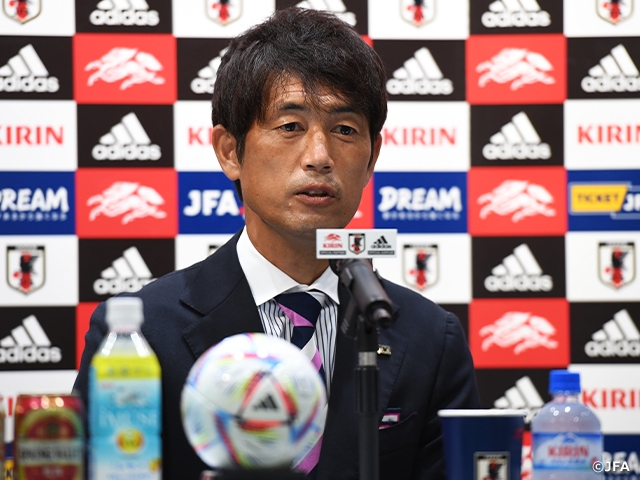 MORIYASU Hajime, Head Coach of SAMURAI BLUE (Japan National Team)
Our goal for the EAFF E-1 Football Championship is to win the title. We hope to build depth of our team and head into the World Cup with solid results and performance. The squad consists of players who are active in the J.League, and through this competition, we can raise the value of the players competing in Japan and demonstrate the value of the J.League. After scouting all 18 clubs from J1, there were many good players to select from, which made the selection process very difficult, but we looked at the individual quality of the players while assessing the results they were producing both individually and as a team. Marinos are the top team in the J.League, capable of playing a high intensity game and showing individual quality while fighting tactically as a team. Hiroshima have also shown their ability to play aggressive in both offence and defence. Among them, we have selected players who have shown individual brilliance. Taking into account of the performance of each player, we would like to create a list for the World Cup preliminary roster and make full use of the remaining time to make our final decision through series of discussions and observations with the team staff.

IKEDA Futoshi, Head Coach of Nadeshiko Japan (Japan Women's National Team)
We want to raise the overall level of the team ahead of the FIFA Women's World Cup™ in July next year. The squad was selected with the aim of winning the tournament while providing an opportunity to try out different combinations of players, including those with limited international experience. Not only in the matches, but also in the training sessions in between, we want to grasp the individuality and characteristics of each player and develop them one by one as a team. Last month’s European tour was a good opportunity for us to share our approach to apply aggressive pressure from the frontline and to test out various offensive combinations, which led to many goals scored by different players. In order to further compete in the world, we need players who can create chances at the individual level, while keeping the team on the same page in terms of when and how to take the initiative and control the match. We want to build on what we have been working on as a team, while assessing the individual players from the perspective of whether or not they can compete at the international level.

SORIMACHI Yasuharu, JFA Technical Director
This is the ninth edition of the EAFF E-1 Football Championship, but Japan have only won the title once, while Korea Republic have won five times and China PR have won twice. This year, the tournament will be held in Japan, so we are determined to win the title. The 26 players were chosen by the head coach in consultation with the staff. Among the selected players, Koike (Ryuta) has worked his way up to the SAMURAI BLUE after spending six years at the JFA Academy. There have been cases of academy players making the national team for the underage category, but this is the first time a player from the academy has been selected for the SAMURAI BLUE, so I am very happy for him, and I hope he will play an active role.

SASAKI Norio, Chairman of JFA Women's Committee
This squad includes up-and-coming young players, some receiving their first call-ups, and I think we can expect some great performances from these new players. We believe we can win the title, so please come to the venue in Kashima to support the Nadeshiko Japan. Your support would be very much appreciated.