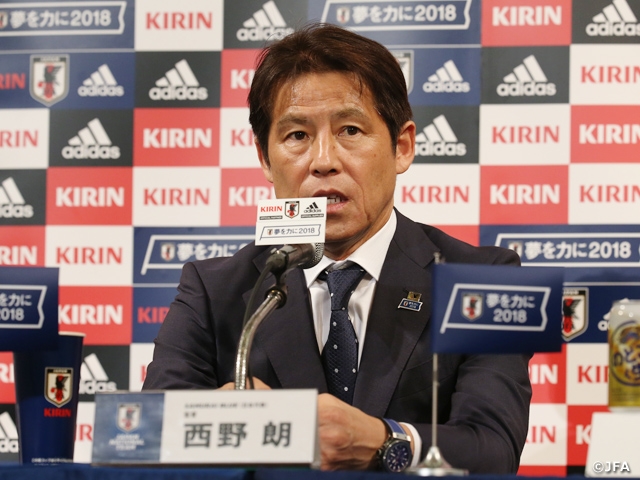 On Friday 18 May, Coach NISHINO Akira of SAMURAI BLUE (Japan National Team) announced the roster for their match against Ghana National Team at the KIRIN CHALLENGE CUP 2018, scheduled on Wednesday 30 May. The match will be the final match held in Japan ahead of the FIFA World Cup Russia 2018. KAGAWA Shinji (Borussia Dortmund), OKAZAKI Shinji (Leicester City Football Club), and HONDA Keisuke (CF Pachuca) were all selected into the roster.

The match against Ghana will be the first match under Coach Nishino after he was named as Head Coach of the National Team in April. The 27 players named in this squad were selected out of the preliminary 35 man roster and the coach stated that he will most likely finalise the 23 man roster for the World Cup from these 27 players.

In the press conference held in Tokyo, Coach Nishino stated, “I have selected the players who gives me the best possibility to line up players in top form on Tuesday 19 June at the World Cup.” The coach also shared his vision to utilise players in multiple positions during the tournament, as he mentioned, “we cannot persist on one system or position. A polyvalent quality and ability to adjust will be required.”

Coach Nishino explained the difficulties he faced in making the selection, pointing out the season difference between Europe and Japan, while describing the conditions of certain players coming off injuries will “change by the minute.” He continued to mention that he had to pass up on selecting two players due to last minute injuries, and that depending on the players’ condition at the training camp starting on Monday 21 May, he will consider calling up additional players.

Regarding the match against Ghana, the coach stated, “it will be our first step ahead of the World Cup. The 27 players will be tested on this match.”

Japan will be making their sixth consecutive, sixth overall appearance in the World Cup. They are placed in group H as they will face Colombia on Tuesday 19 June, Senegal on Sunday 24, and Poland on Thursday 28.

The team will start its camp next week, while the final 23 man roster for the World Cup will be announced on Thursday 31 May, following their match against Ghana on Wednesday 30. A tour to Austria is scheduled in early June, where they will face Switzerland National Team at Lugano, Switzerland on Friday 8 June, followed by a match against Paraguay National Team at Innsbruck, Austria on Tuesday 12 June.

NISHINO Akira, Coach of SAMURAI BLUE (Japan National Team)
On Monday the 14th of this month, I have submitted the 35 man large list to FIFA, but two of the players dropped out of the selection due to injuries, thus making it a 33 player pool to select the 27 players. I have taken in many aspects in consideration, such as, current form, recent performances, career achievements, experience, potential, and possibilities. Many players will fall under these categories, but none of the players are in their top form at this moment. With the season difference between leagues abroad and domestic leagues, we are perhaps in the most difficult period to line up players in their top form. Their conditions will change by the minute, and we must evaluate every players, including those who are currently in the reserve list. We have selected 27 players at this moment, but depending on the players’ condition we will consider calling up additional players during the camp. I am just hoping that these 27 players will show up in good condition when the camp starts on Monday 21st.

With that being said, I have selected the players who gives me the best possibility to line up players in top form on Tuesday 19 June at the World Cup. I must utilise my imagination when observing the players and the team. In order to win against Colombia, we must select the best possible combination among the selected players. I will seek for the best players, best group of players, and the best team. Balance is important when forming a team, but we will not persist on one system or position. The players will be required to display their ability to adjust. There are many players with polyvalent quality within this list. I want the players to showcase their flexibility throughout the competition, so I will have to think of many options and convey them to my players.

TASHIMA Kohzo, JFA President
The list displays an exciting line-up. The camp will serve as a precious time to prepare, and I hope they will utilise it wisely. The goal of the camp is to achieve great results in the match against Ghana, and to gain even greater results in the following events. 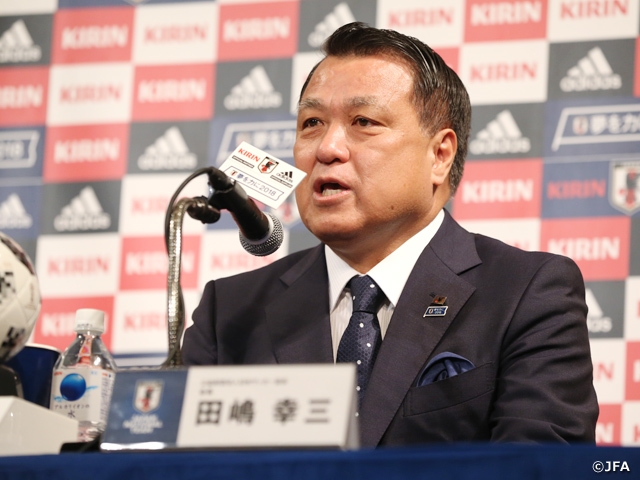 SEKIZUKA Takashi, JFA Technical Committee Director
The camp will start on Monday 21. I will give my best to support the team so that Coach Nishino, the staffs, and the players can all come together entering the FIFA World Cup. The match against Ghana will serve as an important test match ahead of the World Cup. In order for us to compete against Colombia, Senegal, and Poland, we will have to play well in this match against Ghana. 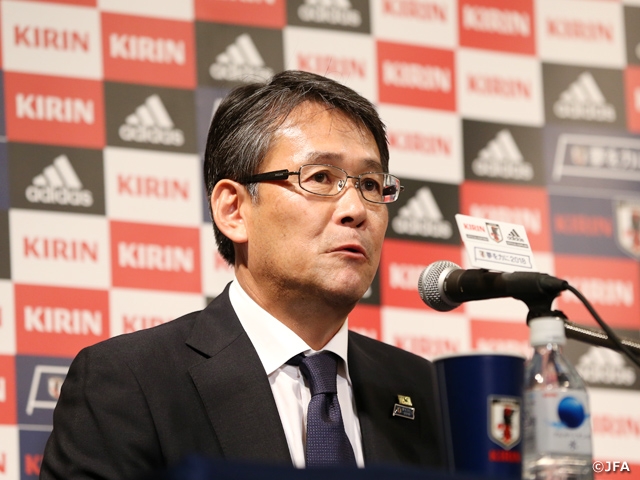