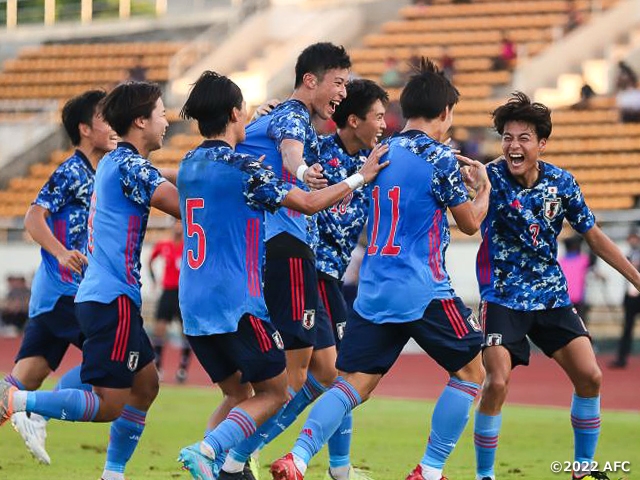 On Sunday 18 September, the U-19 Japan National Team played their fourth group match of the AFC U20 Asian Cup Uzbekistan 2023™ Qualifiers against the U-19 Yemen National Team at New Laos National Stadium.

Only needing a draw to advance through, Japan proceeded with caution against the Yemeni side who showed great aggression with their man-to-man approach. Although Japan were able to possess the ball in their own territory, they struggled to find their rhythm and to create opportunities during the first half.

As coach Togashi later reflected, “We struggled dearly,” Japan could not find ways to penetrate the opposing defence, who showcased a solid defensive performance described by Sano, “a strategy we don’t normally see in Japan.” Yemeni coach Mohammed AL-NUFIAY praised his players, “We did not allow Japan to create chances at all,” after his side kept the Japanese side, who had scored 21 goals in their previous three group matches, scoreless in the first half.

However, Japan gradually picked up their pace after making adjustments during halftime. In efforts to add layers to their offence, coach Togashi introduced SAKAMOTO Isa (Gamba Osaka) in the 75th minute, and the deadlock was broken just three minutes later, when Sakamoto responded to a header flicked by KITANO Sota (Cerezo Osaka) to redirect the ball into the mix that induce an own goal. 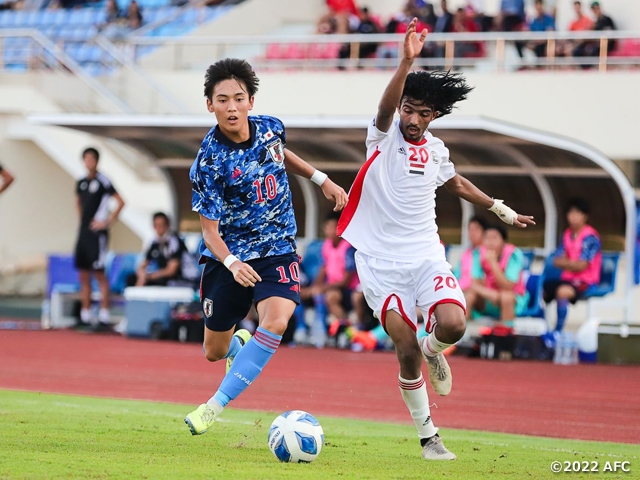 With their defence showing great concentration to keep the clean sheet intact, Japan managed to hang onto this one goal lead to win the match. capping off the qualifiers with their four consecutive victory.

The AFC U20 Asian Cup, which will serve as the FIFA U-20 World Cup™ qualifiers, will take place at Uzbekistan in March of next year.

TOGASHI Koichi, Head Coach of U-19 Japan National Team
The players worked extremely hard to fight through four matches within a week. We were able to gain precious experience through this qualifier, which should come in handy at the Asian Cup. The cheers in Japanese could be heard in the stadium, which gave the players a real boost. We are also very grateful for the warm hospitality of the Lao people, which made us feel at home throughout our stay in Laos.

DF #3 TANAKA Hayato (Kashiwa Reysol)
We are proud of the fact that we didn’t concede any goals throughout the tournament. Today, it felt like we were forced to possess the ball, and it was a very difficult match to play. Yemen played very differently from the other opponents we faced, and we struggled to adjust to their unique tempo. It was a great learning experience, so we hope to make the most of this experience to become a better team.

MF #6 YAMANE Riku (Yokohama F. Marinos)
Although we struggled to find our rhythm in the first half, we managed to make the adjustments in the second half to win the match. I personally felt that I need to do a better job facing a man-to-man coverage. That is an aspect I must improve in order to reach the next level.

MF #10 KITANO Sota (Cerezo Osaka)
Despite seeing plenty of chances from set-pieces, I have not been able to capitalise on them throughout this tournament and the coaching staff have worked with me to improve in that aspect, so I am glad I was able to score form a corner kick today. 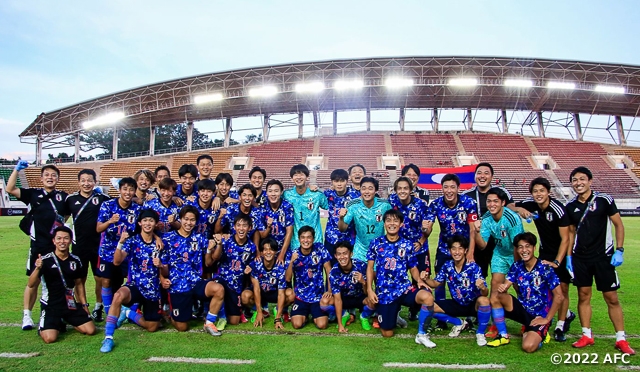