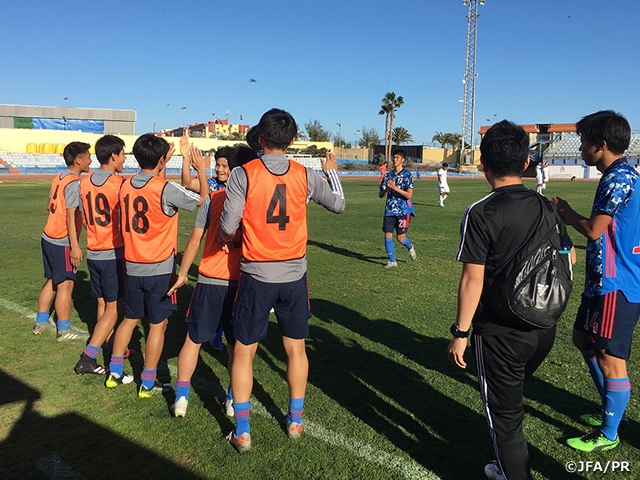 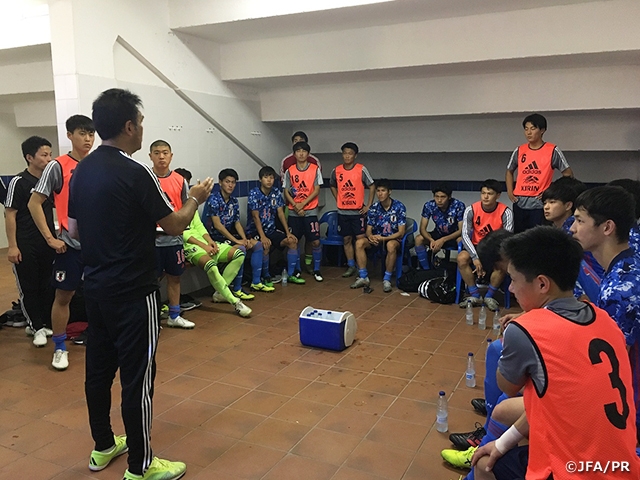 On Tuesday 28 January, the U-18 Japan National Team faced the U-18 Mexico National Team at the U-19 International Tournament "Copa del Atlantico" held at the Canary Islands in Spain, where they got off the tournament with a 1-0 victory.

Japan and Mexico have clashed in various age categories, including last year’s FIFA U-20 World Cup Poland and FIFA U-17 World Cup Brazil. At the U-17 World Cup, Japan has lost to Mexico 0-2 at the round of 16, making this a redemption match for many members of this tournament squad.

Ahead of the match, coach KAGEYAMA Masanaga mentioned, “Don’t be afraid of the opponent. Let’s give our best efforts. You might get nervous and make mistakes from the pitch condition but don’t let that hold you back. We must make quick transitions, out run the opponent, and fight hard to win the match.” Despite the pep talk given by the coach, Japan got off to a slow start, as Mexico applied aggressive pressure from the early minutes. A close play was created in the second minute, when Mexico struck a header from a cross, but Japanese goalkeeper HIGASHI John made a superb save to deny the opportunity. Japan gradually picked up their pace, as they started to use the width of the field to keep the ball moving. In the 26th minute, Japan came close to taking the lead, when FUJII Kaito delivered a through ball to NAKANO Keita, who dribbled passed the opposing goalkeeper to send a cross, but Japan ended empty handed after failing to convert this delivery.

Mexico continued to apply aggressive pressure from their front line, as consecutive opportunities were created in the 31st minute. With Mexico sending multiple crosses from the flanks, a header struck the post, and a goalmouth scramble almost led to a goal, but the Japanese defence showcased their persistency to keep the game scoreless. After enduring a tough stretch, Japan’s patience was paid off, as Nakano Keita connected with a cross sent by KAMIHASHI Ryota to give Japan the lead just before halftime.

The second half continued to see Mexico take control of the match, but Japan kept their composure to keep their lead intact. Mexico came close to equalising the match in the 61st minute, when they struck a powerful shot, but the attempt was blocked by Higashi and the loose ball was cleared by the Japanese defence to deny the opportunity. With the team effectively utilising the substitutions, Japan managed to keep the clean sheet and earned a victory in their tournament opener. Japan will now face U-18 Spain National Team, who won their first match 2-0 against the U-18 Slovakia National Team. 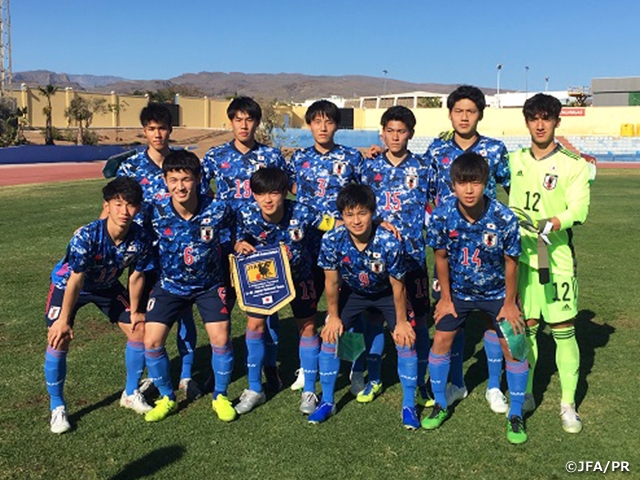 GK #12 HIGASHI John (Nagoya Grampus U-18)
I am glad that I was able to earn a clean sheet victory in the opening match of my first tour abroad. However, there were many scenes where we conceded close opportunities from set-plays and counterattacks, so I must do a better job communicating with my teammates to avoid those situations. I will continue to challenge myself to lead the team to victory and strive to become a better player. With the team left with two more matches to play, we will do our best to prepare ourselves in the best way possible. In order to get myself considered for future activities of the national team, I will try to showcase a worthy performance in the remaining matches.

DF #18 KAMIHASHI Ryota (Kawasaki Frontale U-18)
I am very happy to earn my first selection to the national team. With this being our first match of the tournament, we entered the match with a strong intention to build positive momentum for ourselves. At a personal level, I entered the match with the intention to showcase my ability to win the aerial battles and the quality of my left foot. Also, as a left fullback, I was very eager to get myself involved in our team’s goals, so I am very glad that I was able to assist a goal. Although I was able to create close opportunities with my left foot, I wasn’t able to win the battles to head the ball, so I hope to improve my performance in the next two matches to help the team earn three consecutive wins.

MF #6 YAMAUCHI Kakeru (Vissel Kobe U-18)
After losing to Mexico in last year’s FIFA U-17 World Cup Brazil, I entered this match with a strong sense of revenge. With the team entering the match with limited time to prepare, we struggled to showcase a positive performance, but I am glad we were still able to earn a victory. This match made us realise what we lack as a team, so we will work on those aspects to become a better team. Personally, I need to polish up on my defensive plays, so I will try to improve myself in the next two matches.

MF #9 NAKANO Keita (Kyoto Sanga F.C.U-18)
With this being our first match of the tournament, we were in a must win situation. On top of that, we were facing Mexico, who we lost at the FIFA U-17 World Cup Brazil, so we were fully motivated to win this match. Throughout the match, I feel like we were able to showcase our eagerness to win the match. Our ultimate goal for this tournament is to win three consecutive matches to take the title. We will be facing the Spain National Team in our next match, but we will try to give our utmost efforts to win the match. My strengths lie on my ability to take shots with my left foot, so I will try to take many shots to help the team win in our next match.

FW #20 SUGIURA Rikito (Kokoku High School)
Looking back on today’s match, we were able to take control of the ball possession, but we couldn’t create as much opportunities as our opponents. However, it was great that we still managed to win the match. We must cherish each match of this tournament and try to give our best performance in every match. I hope to learn from this match and try to get myself involved in our goal scoring plays in the remaining matches.