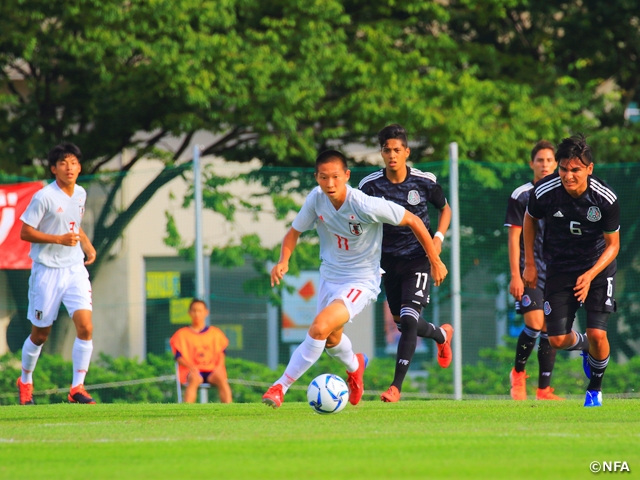 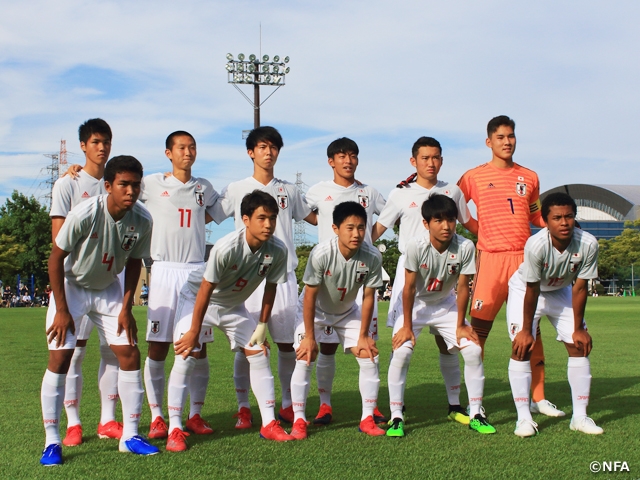 On Saturday 13 July, the U-17 Japan National Team faced the U-17 Mexico National Team in their first match of the 23rd International Youth Soccer in Niigata. With both teams preparing for the FIFA U-17 World Cup, scheduled to take place at Brazil in late October, the tournament provided a perfect platform to test their current strengths. Ahead of the match, coach MORIYAMA Yoshiro told his players, “We must strive to win this tournament while showcasing a solid performance. Let’s take control of the ball possession and hold off the opponents.”

The first half saw an equally matched bout, as both teams started off with great composure. While neither side managed to create a clear opportunity, Japan gradually increased their possession of the ball. The opening goal came in the 21st minute, when TOYAMA Shoji received the ball outside the penalty area and fired a powerful shot that struck the goal post. It was SUGIURA Rikito who converted the deflection into the open net to give Japan the 1-0 lead. Japan seemingly gained momentum from this goal but conceded the equaliser from their own mistake in the 27th minute, when a back-pass was intercepted by a Mexican forward. Despite Japan’s efforts to retake the lead, the first half ended with a score of 1-1.

It was Japan who created the first chance in the second half, but their attempt failed to capture the net. While the team struggled to regain the lead, Japan started to make simple mistakes as the game progressed. In the 89th minute, Mexico capitalised on a play following a corner kick and struck a header to take the lead at the final minutes of the match. Japan made their final efforts to equalise the match, but the match ended with a final score of 1-2. 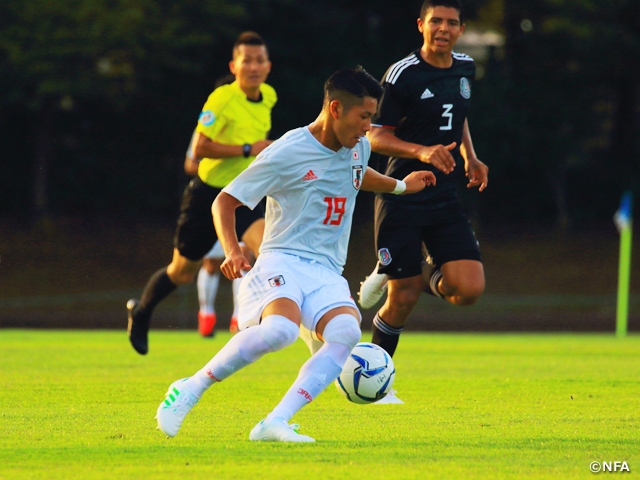 DF #2 SUZUKI Kaito (Jubilo Iwata U-18)
Our performance in the first half was not so bad, but our opponents capitalised on their few chances to equalise the match. We made too many mistakes and gave up the lead in the second half, and it was a regretful performance from us. With the groups of the U-17 World Cup already being determined, we entered this tournament with a sense of urgency. That is why this result is especially disappointing, but we hope to win the remaining two matches and implement the entire tournament experience to strive to become a better team.

DF #16 FUJITA Joel Chima (Tokyo Verdy Youth)
This match against Mexico has given us the opportunity to realise both our strengths and weaknesses, so we hope to utilise this experience to improve ourselves as a team. We still have two more matches in this tournament, so we will have to unite as a team and win both matches to finish this camp on a high note.

MF #10 NARUOKA Hikaru (Shimizu S-Pulse Youth)
Although we managed to score the opening goal against Mexico, we gave up the momentum from our own mistakes and made it a difficult match on ourselves. We failed to showcase our quick ball movements, which was something we have been working on during our training sessions, and we couldn’t control the tempo of the match. I personally made too many simple mistakes and I feel like I lacked concentration throughout the match. I need to prepare myself before receiving the ball, keep my plays simple, and make the right decisions when making a play at our opponents.

FW #18 SUGIURA Rikito (Kokoku High School)
Despite scoring the opening goal, we lacked quality to convert the opportunities in the final third, and in contrast, we ended up conceding a goal from a tall player at the very end. That really summed up the difference between the world and us. I hope to showcase a positive performance during this Niigata tour and earn myself a spot into the final roster for the World Cup.