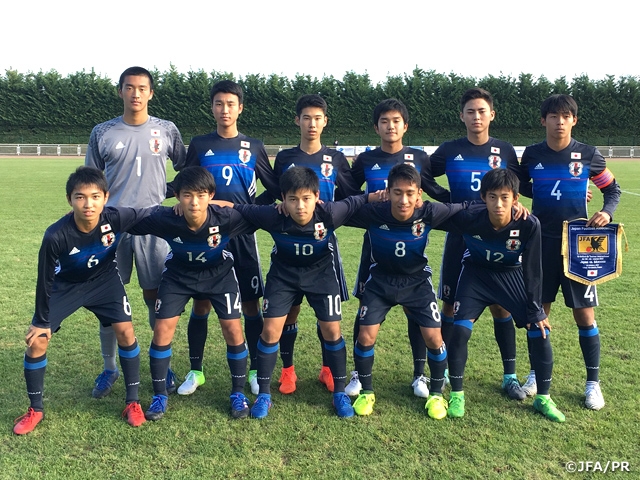 The Val-de-Marne U-16 International Friendly Tournament 2017 got underway and U-15 Japan National Team faced U-15 Morocco in their first match on Tuesday 31 October. The young Japanese squad recorded a 4-2 win and got off to an excellent start to kick-off their tournament in France.

As one of the major sport projects of the nation, Morocco has been recently putting strong efforts in developing their youth players and has become one of the best teams in Africa with nearly half of the members of this youth squad playing in the Academy teams in France and Spain.

Before the match, Japan’s coach ARIMA Kenji emphasised the importance of “challenging spirit” to his players, who responded well with strong determination and entered the game by playing courageously against the physically superior opponents. The risk management against Moroccan attacks was the key in the early part of the game as it prevented them from creating effective scoring opportunities. Then, the first scoring chance for Japan came in in the 10th minute, when forward TANAKA Zen kept the possession upfront, and forward NAKANO Keita received and quickly fed it to midfielder AOSHIMA Kenta, whose shot unfortunately hit the crossbar.

Japan were about to take the firm control of the match, but the opponents pressure started to cause passing errors and their counter-attacks became more effective as the game went on. The African side nearly scored in the 16th minute, but defender HANDA Riku made an excellent sliding clearance in front of the goal. However, the Japanese internationals faced even tougher stretches thereafter, and struggled to reclaim possession in midfield and allowed the opposing forwards to take advantage of their individual skills and speed. As the menacing attacks from Morocco continued, it was then in the 26th minute, when the Japanese squad could no longer protect their goal and conceded an opener. The talented Moroccan forward capitalised on his excellent dribbling skills to evade the challenges of the surrounding defenders after he collected the ball on the right side and scored brilliantly to give his team an early lead.

Gaining momentum after the opening goal, Morocco once again exploited the right flank and the desperate efforts by the Japanese defenders were not enough to prevent the African counterparts to put home a deflected ball into the Japanese net. The first half finished with Japan trailing by two goals.

From the start of the second half, Japan sent midfielder YAMAUCHI Kakeru and forward AOKI Yusuke onto the pitch to attack aggressively and equalise the game. In the 44th minute, Yamauchi surged up the pitch and sent a through ball to Aoki, but his effort just missed the target.

Japan altered its game plan in the latter half and focused more on quicker transitions after losing possession of the ball. As a result, the movement of the ball in midfield improved significantly.  As the opponents gradually started to slow down, their strategy looked even more promising for the Japan attacks to carve open the Moroccan defence. Then, the awaited goal for the Japanese squad came off a corner-kick in the 50th minute, when Aoki made a quick turn to strike the loose ball into the goal to cut the deficit to a single goal. Three minutes later, again after the corner-kick, defender SUGAHARA Kazuma sent a cross to the centre, where defender IAWASAKI Mana made no mistake to head home an equaliser to level the match.

Mounting pressure from the young Samurai players continued to threaten the Moroccan goal. In the 55th minute, Aoshima returned a cross to the far side with a header for Tanaka waiting in the middle, and the Japanese forward fought hard and kept possession before he netted a go-ahead goal to take the lead for the first time in the match.

Moreover, second-half substitute and forward TOYAMA Shoji was fouled inside the box and earned a penalty-kick in the 69th minute. Although he failed to take advantage of the spot kick himself, Toyama made amends by tapping in the deflection of Sugahara’s shot off the cross bar on 76 minutes and netted the fourth goal to double the lead. Japan kept their concentration until the match and did not allow the opponents to score in the remainder of the match before they claimed an impressive 4-2 come-from-behind win in the important first match of the tournament.

The next match of Japan is scheduled on Friday 3 against Bosnia Herzegovina. 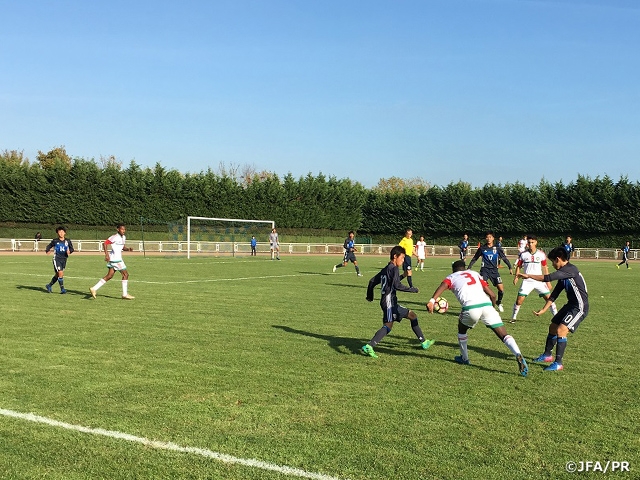 GK #1 YAMADA Taiki (Kashima Antlers)
In today’s match, we got caught up in the strong pressure by our opponents early in the first half, and could not keep the ball as well as losing the one-on-one battles. We allowed two goals and finished the half as they dictated the pace of the game. But thereafter, we entered the second half with composure and had a clearer idea of our game plan. Then, we kept better possession of the ball and started to play at our pace. As a team, we need to make adjustments in order to always play like the way we played in the second half. In overseas, we do not always get to play on good pitch conditions and face different circumstances than we do in Japan. Unless we expect and prepare for these differences before the match, we often allow goals like we did in the first half. Today’s match was a good reminder of such instances. We don’t know what kind of pitch conditions we will have in the next match, but we must expect different scenarios, and stay composed and be ready to play in whatever the situation that we may get in. We will go out to win as a team again.

DF #5 IWASAKI Mana (Yokohama F Marinos Junior Youth)
It was my first match to play with the national U-15 team, but I was in good form and started off well. We allowed two goals in the first half and scored four in the second. There are many things that we need to work on, but I think we got off to a good start by winning this important first match. I played against foreign players for the first time, and my impression is that they are very strong in pressing as well as the battles for the ball. It’s difficult to win them if we play like we do against Japanese players. I thought it is important to predict what will happen next and must be prepared even more than what we are accustomed to doing so. In today’s match, I scored a goal and we won it, but there were things that we could have done better considering that we allowed the opponents to net two goals in the first half. In the next match, we will communicate more actively and try to win it with a clean sheet.

MF #6 NARUOKA Hikaru (Shimizu S-Pulse Junior Youth)
Today, we played against Morocco that were physically very strong. They were a very tough team with menacing attacks. We entered the first half well, but then our opponents started to control the pace and, as a consequence, we allowed two goals. I was also caught up in the moment and couldn’t focus well in the first half. However, in the second half, we got used to the pitch conditions, and had better control of the match and scored several goals. In this match, I learned the important of not allowing goals by staying resilient even when we are in a difficult situation as well as the significance of sticking to our game plan even after conceding a goal. I will take advantage of this lesson for the coming matches. As a team, we will try to score first. Personally I will try to keep up my hard work in both offence and defence and do my best in winning all the battles for the ball. 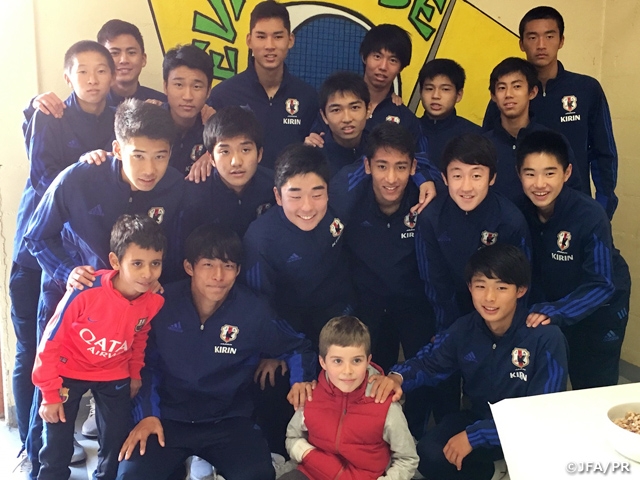