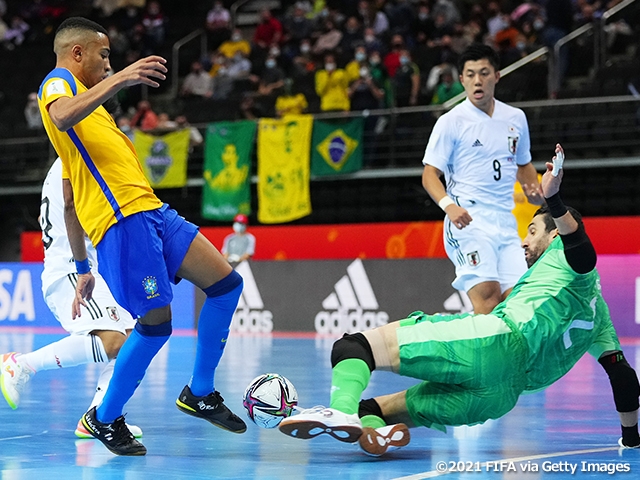 After advancing through the group stage in third place with a record of one win and two losses, Japan faced Brazil, who topped Group D with a perfect record, at the round of 16. The five time world champions, who is currently ranked second in the world, has scored the most goals (18) while conceding the fewest goals (2) at this tournament. Their ace, FERRAO, has scored six goals in three matches, leading the top scorer ranking.

With the team on the verge of making history, coach Bruno GARCIA named the same line-up as their match against Paraguay, with PIRES Higor in goal and SHIMIZU Kazuya, HENMI Katsutoshi Rafael, NISHITANI Ryosuke, and OLIVEIRA Arthur as the four field players.

The match started with Japan taking the initiative by applying aggressive pressure from their frontline, keeping their plays simple, and finishing their plays with a shot. Their game plan came to fruition when the shot taken by HOSHI Shota in the fourth minute deflected off the hands of the Brazilian goalkeeper GUITTA and ended in the back of the net, giving Japan an early lead. 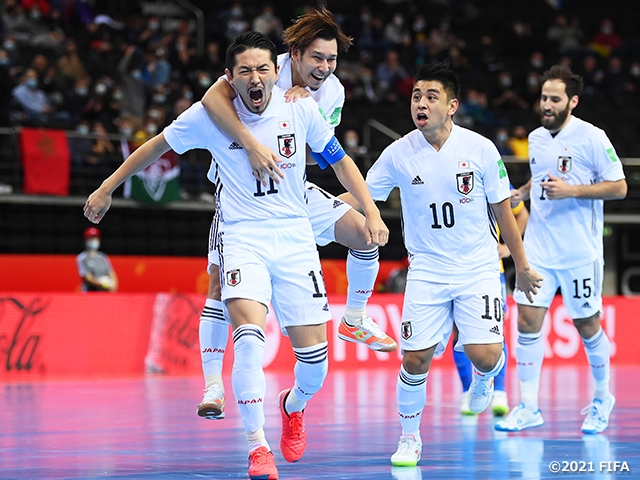 However, Japan’s one goal advantage quickly diminished, as Ferrao struck a magnificent shot with his left foot to equalise the match in the fifth minute.

While Brazil constructed their offence through superb techniques and individual efforts, Japan responded with quick transitions and counterattacks, as they collected the ball to their pivot, Shimizu, to seek for their opportunity to retake the lead.

With 22 seconds left in the first period, Brazil broke through the Japanese defence to create a close opportunity, but Pires made a sliding effort to keep the score intact, as the two teams entered the break tied 1-1.

Japan continued to apply pressure in the second period to keep the Brazilian side from scoring but struggled to find their rhythm in offence. Despite the persistent defensive efforts showcased by Japan, Brazil broke the deadlock in the 31st minute, when LEONARDO made a run down the flank and snuck the ball past Pires, who made a diving effort to make a save. PITO scored Brazil’s third goal in the 38th minute, when he responded to a long diagonal pass over the top and showcased great foot work to send the ball into the net.

In efforts to rally back, Japan deployed their powerplay in the final two minutes, which led to the goal of Nishitani, who responded to a deflection caused by Henmi and converted the opportunity to put Japan within a goal, but with Brazil scoring their fourth goal in the 40th minute, Japan fell short from equalising the match, losing with a final score of 2-4 against the South American powerhouse.

Mr. KONISHI Teppei
We finished the FIFA Futsal World Cup Lithuania 2021™ at the round of 16. First of all, we would like to thank all of our supporters, former members of the Japan Futsal National Team, F.League officials, the media, and those supporting futsal in each region. All of your voices gave the team great power and courage. We would also like to take this opportunity to express our gratitude to the clubs and families for allowing these staffs and players to take part in this long-term activity which spanned over two months. Thank you very much.

At this tournament, we conceded goals to Angola from uncharacteristic mistakes, but the players managed to play with good intent and time themselves well in defence, while also staying on the same page to construct quality attacks to win the opening match. In the second match against Spain, the team showcased a superb performance in the first half, arguably their best performance in the five year tenure under coach Garcia. And I think the team played even better in their match against Brazil at the round of 16. We are very proud to be able to showcase this kind of performance at the world’s biggest stage. However, it is also true that we fell short from reaching the quarterfinals, despite displaying a strong performance. It could be said that accumulation of missed opportunities and small mistakes eventually cost us our tournament life.

We must accept this result and try to make the most of this experience by reviewing and analysing what went right and what went wrong at this tournament. Working together with the Futsal Committee, Technical Committee, and the F.League, we will develop a concrete development plan for the national team, enhance the training environment, improve the quality and quantity of coaches, and collaborate with local communities to create an environment where more children can enjoy playing futsal and football. We will continue to work together to achieve our goal.

Bruno GARCIA, Coach
It was a spectacular match. We managed to execute our game plan to keep the match close until the very end. However, our opponent showcased their brilliance to capitalise on our few mistakes. We also had our chances, but our opponent was much more critical and showed great precision to win the match. Overall, I feel like we were able to execute our game plan perfectly. Although we need to assess each match in detail after returning to Japan, the fact that we were able to demonstrate and maintain a high performance throughout the tournament gives us great confidence and proves that we are back on track. The players we faced today were players who are playing active roles for some of the best clubs in the world. The performance we showed in today's match was a culmination of the five years we worked together, and I feel that we have made major progress over the course. The world has entered unprecedented territory over the past two years and the team was not able to play a match for 18 months. However, despite the difficult situation, each player and staff member worked with great flexibility to bring the team to this level, and I think it was a really wonderful five years.

#7 FP MUROTA Yuki (Espolada Hokkaido)
We were able to put up a good fight against both Spain and Brazil. I don’t know if the matches were decided by a small margin or if it’s actually a big difference, but it was clear that our opponents were much more critical in the final third to convert their opportunities. The prep work felt so long, because we trained two times a day leading up to the World Cup, but once the matches started, it went by so quickly. In today’s match, I was able to actively take on the opponents during the second half, but I wish I could have played more aggressively from the first half, and perhaps even in the matches played in the group stage. I feel like we were able to showcase our aggressive pressing style from the friendly matches prior to the tournament. Personally, I saw lots of room for improvements. Even though I wanted to get myself more involved not only in defence but in offence too, I already had a bit too much on my plate. However, I feel like I was able to give everything I’ve got, so I have no regrets. 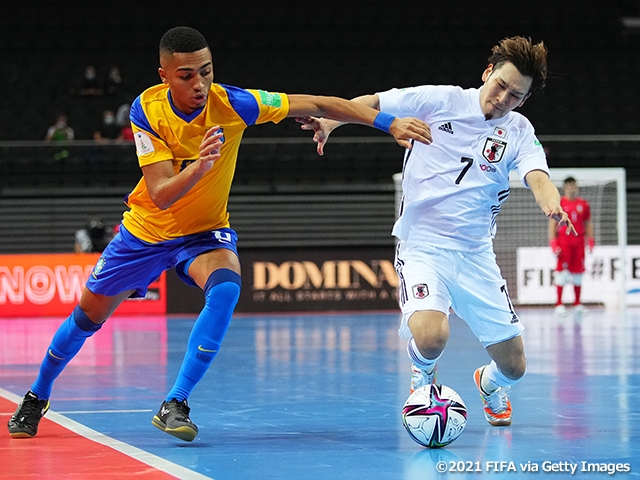 #9 FP SHIMIZU Kazuya (Cordoba Patrimonio/Spain)
I am very disappointed. Although we did everything we were supposed to do, we didn’t have what it takes to achieve our goal. Our opponent utilised their pivot to create much more chances than we did, while also showcasing tenacious efforts to defend their goal. In contrast, I wasn’t able to hold off the Brazilian defenders and couldn’t execute my job. Our set was playing on the premise that we will always utilise the pivot to build our attacks, and if I was able to capitalise on the given opportunities, this match could’ve ended differently. Even if we create tons of close chances, we cannot win matches if we don’t convert them. Our initial plan was effective, but we weren’t able to execute it for the entire 40 minutes, so that is an aspect we must work on.

#10 FP HENMI Katsutoshi Rafael (SL Benfica/Portugal)
We came very close to winning today’s match, so this result is unfortunate. I think we gave everything we’ve got against strong opponents like Angola, Spain, Paraguay, and Brazil. Even though we couldn’t win today, it is clear that Japan has gotten much better over the years. I remember getting overwhelmed and totally swept by Brazil at the FIFA Futsal World Cup Thailand 2012™. Today, we entered halftime tied at 1-1, and we really thought that we had a realistic chance of winning. However, we fell short and lost by a very small margin. This match and our match against Spain reminded us that a simple mistake can directly cost us a goal when facing opponents at their level, and that is the level we must strive for. At the same time, it reminded us that Japan has really improved over the years.

#11 FP HOSHI Shota (Nagoya Oceans)
For me, this was my second World Cup, but for many of my teammates, this was their first, so they must have been overwhelmed. However, we should be proud of the fact that we were able to showcase such strong performance under this circumstance. I have decided to retire after this season, so this was my last match as a member of the Japan Futsal National Team. There might be other players who are also retiring soon, but I hope we can pass down this wonderful experience to the younger players. That is part of the responsibilities for the players representing Japan, so I hope everyone will keep their heads up high and strive to achieve greater results at the next World Cup, which is three years from now. I don’t want anybody to be satisfied with this result and continue to strive with the determination to reach a higher level. This may sound like a cliché, but I am glad I was able to play with this squad.

#14 FP NISHITANI Ryosuke (Nagoya Oceans)
This World Cup went by so quickly. To be honest, I really wanted to play with this team a little longer, but the result is everything. It reminded us that the world is so close, yet so far. We played against strong opponents during our pre-tournament tour, which gave us the confidence that we can compete against the best teams in the world. There are many Brazilian players in the F.League, and from experience, I knew that they don’t like to face opponents who makes lots of runs, so that was an aspect we tried to exploit. However, we spent too much energy in defence and couldn’t make effective transitions to offence, so that is an aspect we need to address. As a team, Brazil was not as organised as Spain, but they had tremendous individual talents. Dedication and discipline are some of the strong points of Japan, but this tournament made us realise that that was not enough. It reminded us that we need more players who can single-handedly create opportunities and make the difference. 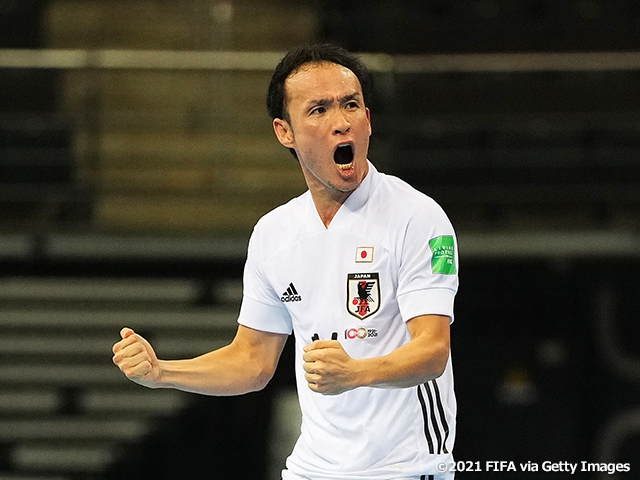