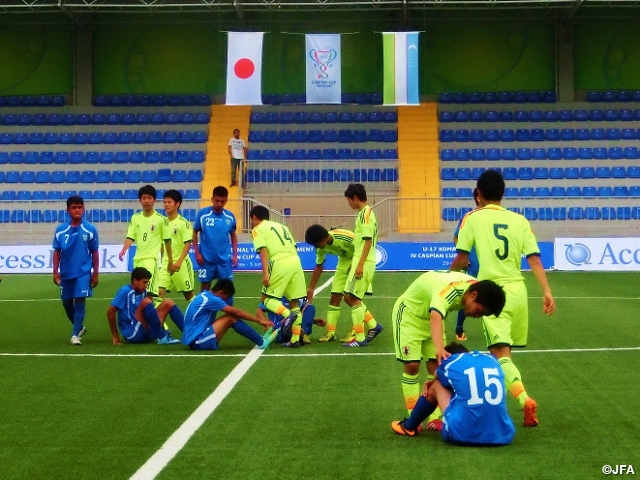 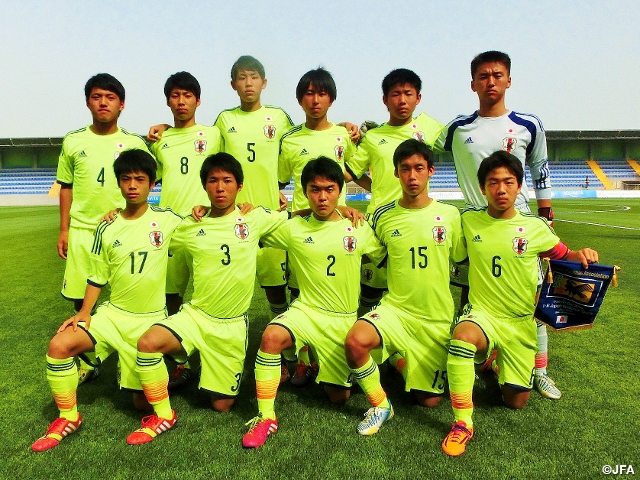 Uzbekistan National Team, a formidable team in Asia, was opponent of Japan’s playoff match after drawing with Georgia and took second place in the group stage.
Before the final qualifying round of AFC U-16 Championship, it was valuable opportunity to play serious match to check the team performance of Japan squad.
Just like the game against Georgia, the match went well, exchanging fast passes and didn’t give them a control, YASUI Takuya a (Vissel Kobe U-18) scored goal in 21 minutes and SUGIUMURA Fumiya (Nagoya Grampus U15) scored another goal. But one goal was taken by Uzbekistan when playing in congested area trying to get the loose ball from set play. Finished first half leading 1-0.
In the second half, the system was changed to 5-back, Japan kept control of the ball in defense zone while keep Uzbekistan at bay, preventing their counter-attack. But the Japan squads’ running gradually slowed down, surrendered the goals from set play triggered by careless foul and was tied the game 2-2. Japan squad created a few goal-scoring chances but the both sides weren’t successful in scoring additional goal and resulted in the penalty shootout.
Japan’s first kicker Neyama Kanta (Nagoya Grampus U18), a game captain today, scored the goal calmly then first kicker of Uzbekistan player’s shoot was finely stopped by Tsuruta Kaito (Vissel Kobe U-18).
From the second kicker onward, none of Japanese player missed the goal, Japan won the match 5-3 (penalty shootout) when fifth kicker Yasui Takuya’s shoot found the net.

KIMURA Yasuhiko, Interim Head
Being third game in this championship, the players were beginning to grasp how to make a perfect preparation until the day of the game. Every player did the preparations for demonstrating the best performance in the game; taking a meal, a rest and a walk, how do you spend time in the hotel and locker room.
Playing against Uzbekistan, a formidable team known for solid defense and counter attack, it was very good experience for the final qualifying round of AFC U-16 Championship.
In the first half, Japan squad created the goal scoring chance as we moved the ball and scored two goals as exactly imagined. But in the second half, the players’ running slowed down which has been the issue and lost two goals from set play and tied the game in the end. It was clear we need to improve the players’ running and the defense for a set play.
Luckily we won the match in penalty shootout and go on to playoff for 5th place, I am going to hold good preparation for the next match against Bulgaria.

TSURUTA Kaito (Vissel Kobe U-18)
In spite of leading the game, we were rallied again to tie the game. Personally speaking, I would review I didn’t give adequate coaching to teammates to move to right position and that resulted in opponent player free of our defense. I think I have to improve this point in the next match and concentrate in the game.

ABE Masashi (Seiryo High School)
For three games so far, we couldn’t score additional goal in the second half and conversely we were rallied to draw. I think the reasons for making the same mistakes three times are lack of physical strength and insufficient adjustment skill after making the mistakes. I am going to be more focused on the next play of opponent players and hoping to finish the tournament with the victory.

ONOZAWA Toshiki (Cerezo Osaka U-18)
I am glad to win this game to begin with. Our team spirit looks like getting stronger as we play more games. But I fully aware of something urgently we need to improve; not an accurate pass, can’t keep running towards end of the game. I would mark today’s victory as starting point of 98-Japan and do my best to keep winning the games. 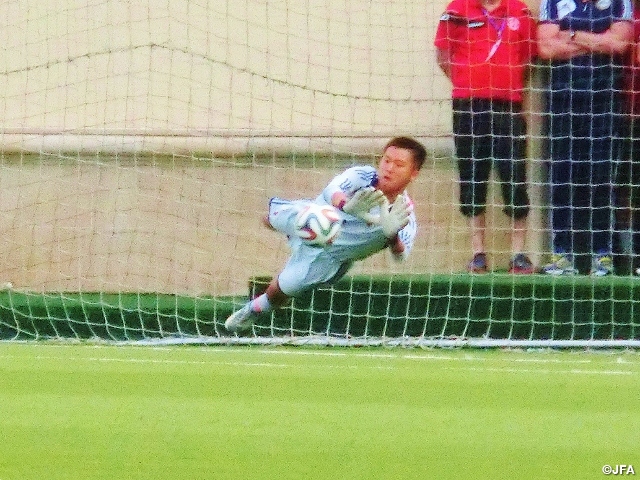