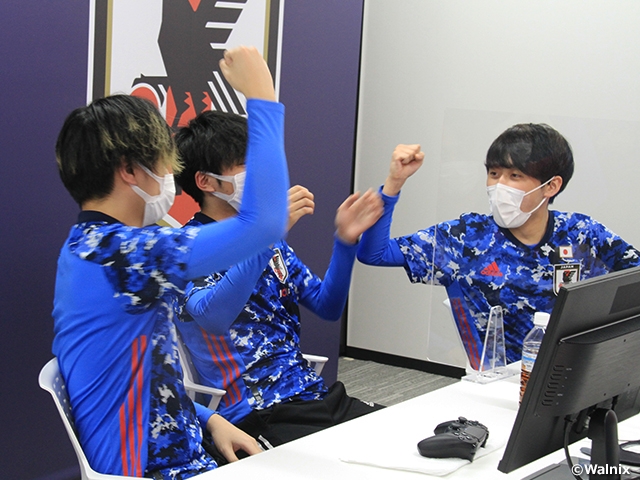 The Japan eNational Team played four games in a 2-on-2 format, with Web Nasri and Agu taking on each opponent. In the first leg against Indonesia eNational Team, Japan took the lead in the eighth minute, but conceded the equaliser in the 29th minute, and despite creating several chances in the second half, fell short from scoring the winning goal, ending the match at 1-1.

In the second leg, after a scoreless first half, the game continued to go back and forth in the second half, and despite taking the lead in the 60th minute, Japan once again conceded the equaliser in the 76th minute, finishing with a 1-1 draw.

Japan then faced the Malaysia eNational Team. Similar to the two games played against Indonesia, Japan took the lead in the 19th minute but conceded a goal soon after. A goal scored early in the second half put Japan in the lead, but Malaysia came back to score the equaliser in the 81st minute, handing Japan their third consecutive draw. 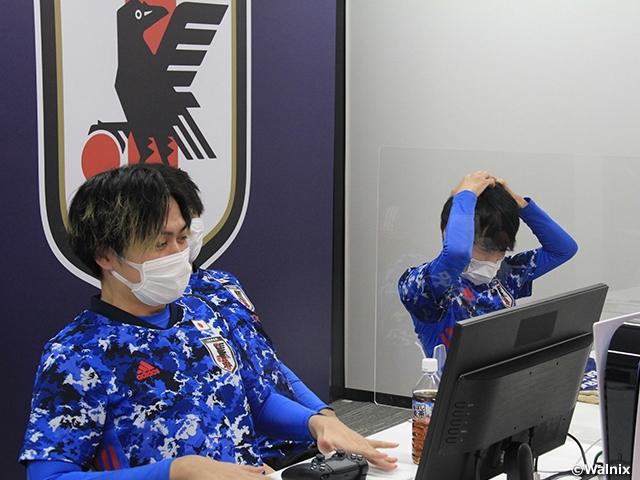 In the second leg, Japan's aggressive defence kept the opposition at bay, but in the second half Malaysia scored the opening goal in the 61st minute. With time running out, Agu made a prediction when the opposition was about to take a corner kick, “We’ll score a goal from a counterattack, strip the ball off their kick-off and score another goal to take the lead.” Just as he predicted, Japan went onto score back to back goals in the 87th minute and 90th minute to bag their first win in a dramatic fashion. After playing four games, Japan ended the day with six points, with a record of one win and three draws.

Jay (Kawasaki Frontale)
In a 2on2 game, it is very difficult to control the game after taking a lead, because the two players need to synchronise in defence, and it is easy to concede a goal if we don't apply enough pressure, and the difficulties really came out in these matches. We changed our game plan from Agu's tactics to Web Nasri's just before the game, so Agu was a bit lost in some parts, but we were able to showcase some good combinations at the end, so I think we can expect a lot more tomorrow.

Web Nasri (Kashima Antlers)
We could have won every game by two goals, so we are not satisfied with the results, but we did not lose, so it wasn't bad. Our biggest challenge is to score goals, as we could have scored two or three more against Indonesia. The first leg against Malaysia was disappointing, but we were able to overcome our scoring issues in the second leg and were able to take more shots, so even when we conceded, we were confident that we could turn things around.

Agu (Blue United eFC)
What we had practiced in advance was not working so we changed all of our strategies just before the game. Our overall performance was not bad, but we conceded goals in unfortunate ways in the first three games, which demoralised us in defence. After three straight draws, we decided to go for it in the last game, which helped us turn things around. In the end, we won the game just as I predicted, so I think it was good. 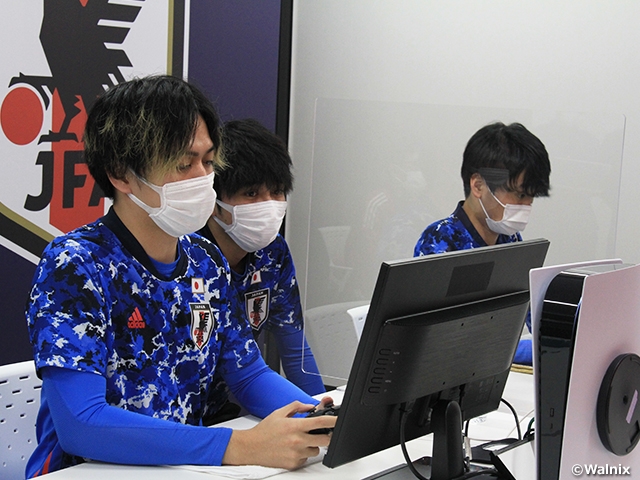