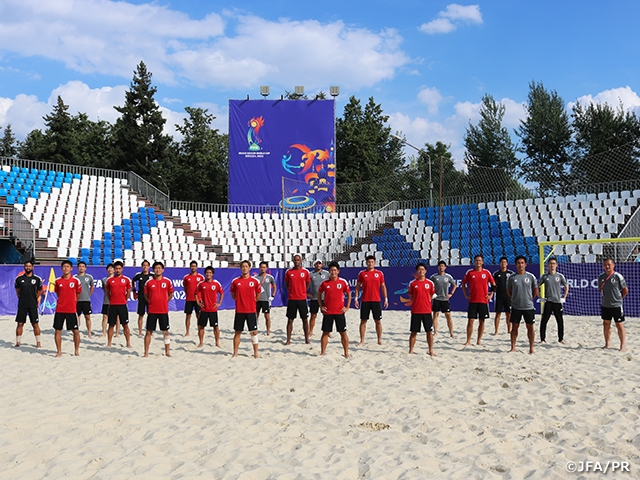 The team was given the opportunity to prepare themselves in the three training matches held between 10 to 13 August, as they faced three teams also participating in the World Cup. Through the series of matches, the players were able to brush up their game intuition while also getting a feel of the tempo and athleticism showcased by the foreign players.

Following a day-off, the team entered the official tournament period, as the players took part in pre-tournament meetings held by FIFA.

An official training session was held on Tuesday 17 August, as teams were given the opportunity to train on the actual match venues of the FIFA Beach Soccer World Cup Russia 2021™ for the first time, as goalkeeper KAWAI Yusuke mentioned, “It may be easier to give directions to my teammates, because my voice was echoing.”

In order to prevent the spread of COVID-19, the stadium’s capacity will be limited to 50%, but OBA Takaaki shared his take on the stadium, “The slope of the stands is steep, so it might feel oppressive when the crowd enters the stadium.”

At the final training session before the tournament, the team went through their basic strategies while actively communicating with each other, as they worked on their offence from the 3-1 formation and set-pieces. The team reflected on the bitter experience they suffered two years ago and concluded the session by reconfirming their goal to become the world champions. 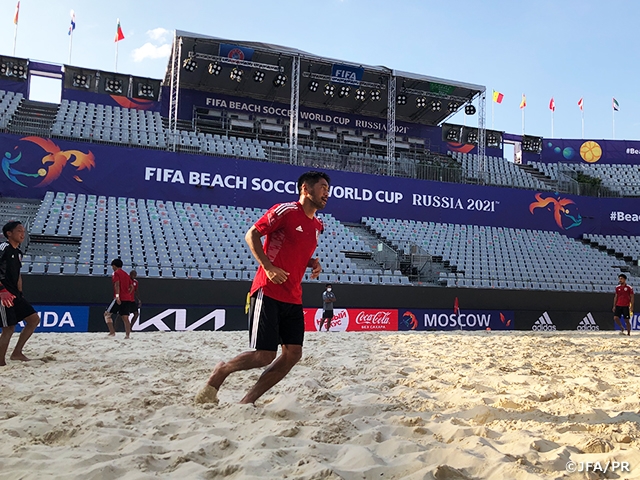 TABATA Teruki, Coach
The weather in Russia is much better than I expected. The team has thoroughly prepared for the tournament while also taking necessary measures to prevent the spread of COVID-19. We are fully prepared for our first match against Paraguay and with the support of the staffs, we should be able to enter the match in great condition, so I am expecting a great match. In beach soccer, European teams had the opportunity to play in many matches, while we had very limited opportunities. However, we have worked hard to build on our defensive system, while strengthening our offensive tactics, to exceed the fourth place finish from the previous tournament. How often we can get the ball to our pivot will be the key to this match. Please keep a close eye on not only the regular members, but the new players and player-coach Ozu. Although we are in difficult times, we hope to deliver a bright news to Japan, so we will give our best efforts to win the opening match.

GK #1 KAWAI Yusuke (Tokyo Verdy BS)
I am in great condition and my motivation is rising day by day. I feel that we were able to resolve the team’s issues in the three training matches we played last week. In order to win matches at this stage, we must stay on the same page and work together as a team. We are given this opportunity to participate in the World Cup despite these difficult times, not only in sports but in life in general. That is why we hope to produce results that can bring bright news and energy to the Japanese people. The future of Japanese beach soccer is also depended on our result, so we will give our utmost efforts to make a deep run. We are committed to showcase our best performance for our country, so please root for us.

FP #7 OBA Takaaki (Loewe Yokohama)
After falling short from winning the medal in the previous World Cup, I felt that we lacked the determination and composure to win at the world stage. That is why we are focused on showcasing our determination to win matches from the group stage. Following the training matches, our coach mentioned that he wants me to “produce results as an individual,” so I will enter the match with the intention to score goals and focus on containing the opponent in defence. With the veterans and youngsters actively interacting with each other, while following measures to prevent the infection, the team is surrounded with a very positive vibe. I am personally focused on winning the first match, and I believe that we are fully prepared for it. I know that our country is in the midst of a very difficult time, so we hope to showcase a performance that can give back to our family, friends, and everybody who has supported us over the years. 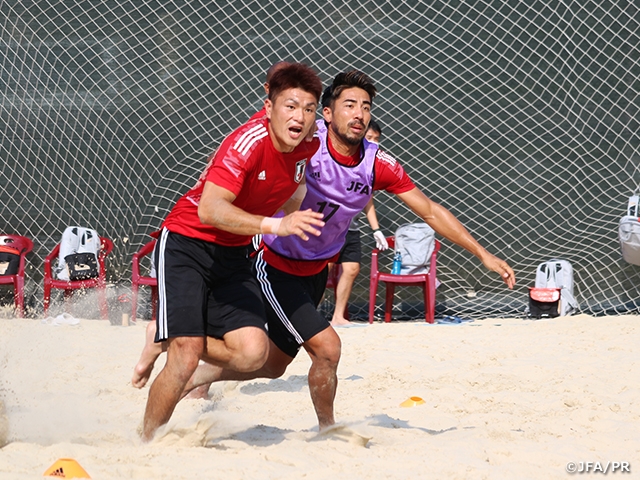