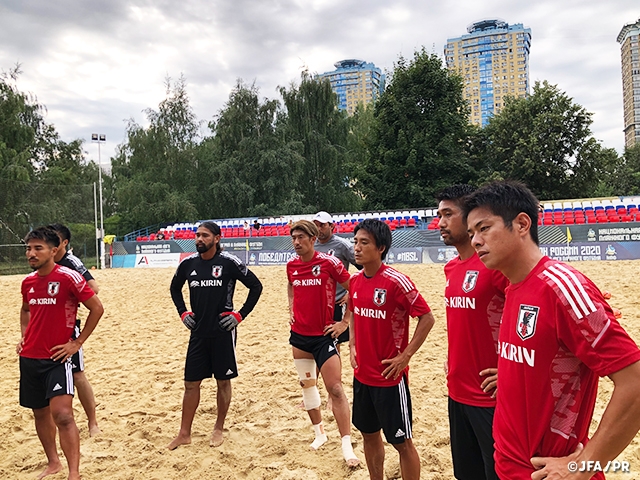 On Saturday 7 August, the Japan Beach Soccer National Team arrived in Russia to hold a training camp ahead of the FIFA Beach Soccer World Cup Russia 2021™, which will kick-off on Thursday 19 August.

The players and staffs were gathered one day ahead of their departure date to take a PCR test. After confirming a negative result from everyone, the team made their way to Moscow from Haneda Airport. Following a 10 hour flight, the team arrived in Russia and held a light training session to loosen up their body.

On the second day, the team conducted full-on training sessions in the morning and afternoon, where they focused on shifting their system from a 3-1 formation to a 2-2 formation and practiced taking shots from the transition. With the revision of the regulations, goalkeepers are now required to have more foot skills than before. While there were good offensive plays created from the goalkeeper position, the players struggled to position themselves where they can prevent the passes coming into the opposing pivot player, allowing the attacking side to exploit the open space behind them. Coach TABATA Teruki was heard telling his players, “Talk to each other on the pitch to avoid ambiguous positioning. If we are challenging the ball, we must apply pressure as a team. Don’t hesitate to put your body against the opponent. We must perfect the small things to achieve a big goal.”

The team is scheduled to play training matches against other teams participating in the World Cup starting from Tuesday 10 August. 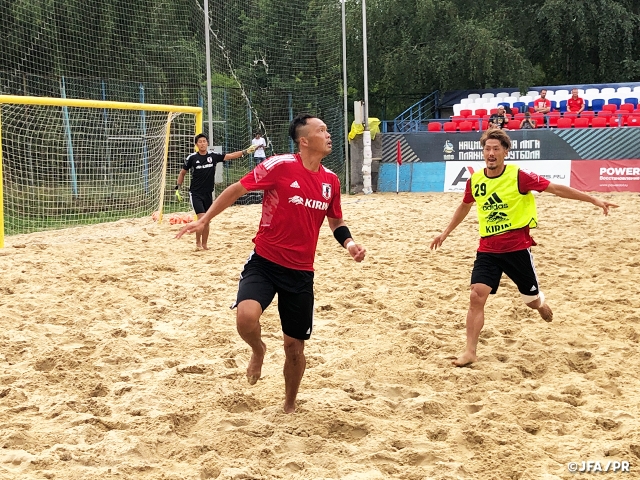 GK #1 KAWAI Yusuke (Tokyo Verdy BS)
Thanks to the past results achieved by our predecessors, we are able to participate in this World Cup without playing in the Asian qualifiers. The weather in Russia is great, and we are gradually ramping up our conditions ahead of the tournament, in which we are striving to exceed our previous result. If we can stay on the same page and showcase what we have been working since the domestic training camps, I strongly believe that we can achieve our goal. The team must adjust to the new regulations, but we are prepared to showcase the Japanese way, so we hope to make a few more adjustments and try to keep everyone on the same page to heighten the team’s overall quality. We have not been able to play training matches against other countries since the last World Cup, so we hope to make the most of the matches we play during this training camp to polish our game intuition.

FP #4 MATSUDA Kosuke (Loewe Yokohama)
We have arrived in Russia ahead of the World Cup and I am getting used to the time difference. The weather is great, and we have been able to carry out our trainings very comfortably. Due to the influence of the corona-pandemic, this will be our first team activity held abroad since the last FIFA Beach Soccer World Cup™. It has been nearly two years, but we will believe in the work we have accumulated through the training camps held in Japan and enter the World Cup with confidence. In order to achieve our goal, we will cherish each moment and give our best efforts to prepare ourselves towards the opening day.

FP #8 MATSUO Naoya (Averdade Kumamoto BS)
We have ended the second day of our training camp in Russia. I am no longer jetlagged and getting used to the environment without any problems. The FIFA Beach Soccer World Cup Russia 2021™ is about to kick-off in 10 days, and I can hardly wait. However, it is going to be a marathon, so I must be patient and try to gradually improve my conditions ahead of the World Cup. With this being our first tour abroad since the previous World Cup, I was a bit worried at first, but now that we are here in Russia, I am fully motivated and grateful to be able to represent our country. We will give our best efforts to prepare for the World Cup while taking necessary measures against COVID-19. 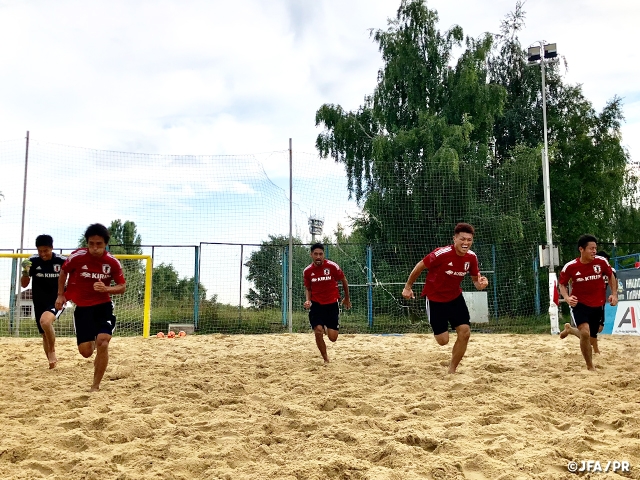