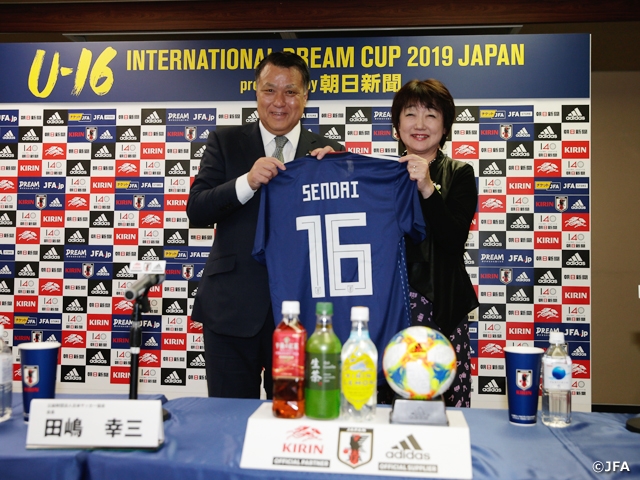 On Friday 17 May, the details of the U-16 International Dream Cup 2019 JAPAN presented by The Asahi Shimbun was revealed by the Japan Football Association (JFA), as a press conference was held in Sendai, where the tournament is scheduled to take place from Wednesday 12 June. At the press conference JFA President TASHIMA Kohzo was joined by President OKUBO Yoshio of Miyagi Football Association, and Mayor KORI Kazuko of Sendai City.

Established in 2015, the tournament marks the fifth annual holding this year, where Romania, Nigeria, Mexico, and Japan will compete for the pinnacle of their generation. After showing his appreciation towards Sendai for hosting the event for the third straight year, President Tashima shared his aspiration for the tournament, “The players shall play in this U-16 International Dream Cup while picturing themselves playing for the future Japan National Team,” referring to the fact that the KIRIN CHALLENGE CUP 2019 will be hosted at Hitomebore Stadium Miyagi just three days prior to the tournament. 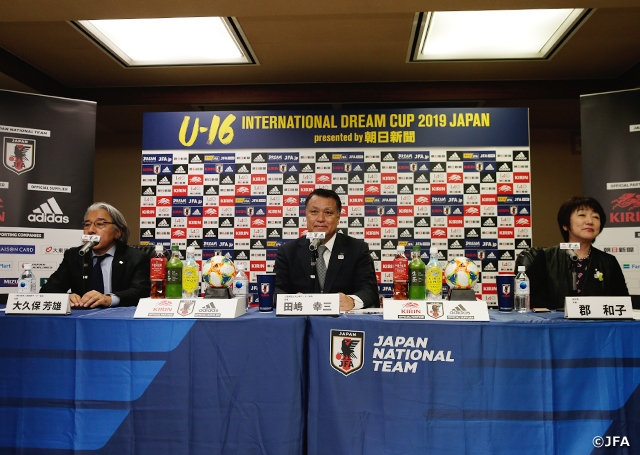 During the press conference, a video message from SCHMIDT Daniel, who plays for the local club Vegalta Sendai, was displayed. In the video, Schmidt sent out a message towards the players, “I am happy that the U-16 International Dream Cup is once again going to take place in our hometown of Sendai. Playing in international matches at a young age will become a precious experience for you. I hope this tournament will become an experience of a lifetime.” The goalkeeper of Vegalta Sendai also encouraged the people of Sendai to come out to the stadium for the contests, as he mentioned, “I hope people in Sendai will remember the names and faces of the young SAMURAI BLUE prospects and support their growth.”

The U-16 International Dream Cup 2019 JAPAN presented by The Asahi Shimbun will be held from Wednesday 12 to Sunday 16 June at Yurtec Stadium Sendai.

TASHIMA Kohzo, JFA President
With our vision to provide more opportunities for our young players to play in international matches, the JFA established this U-16 International Dream Cup in 2015. Following Osaka and Tottori, we held this event in Sendai for the two years running. Now that we are coming back to Sendai for the third straight year, I am truly pleased. The cultural exchanges off the pitch among participating players are making this tournament even more meaningful. Each year, a welcome reception is held at the players’ hotel on the day before the opening day. Last year, a local traditional dance of Suzume Odori was performed to provide warm hospitality for the visiting teams. During the tournament, the visiting players will be provided with the opportunity to experience Japanese traditional ORIGAMI and SHODO. Also, in the past two tournaments, the players took a tour to Arahama Elementary School in Sendai to learn about the Great East Japan Earthquake by viewing photos and videos on display. We hope the participating players to grow not only as a football player but also as a person through this tournament experience.

OKUBO Yoshio, Miyagi Football Association President
Romania is located in Eastern Europe, but they play a Latin style football. Mexico is well known for their consistency and they have reached the round of 16 in consecutive World Cups in the recent years. Nigeria has won the championship at many U-17 World Cups. With these incredibly talented players gathering from the world to play in Sendai, it provides a wonderful learning experience for the young players of Sendai. I am very honoured and thankful to be given the opportunity to host this event for the three years running.

KORI Kazuko, Mayor of Sendai City
I am certain that this event will be a significant event to celebrate the start of the new Reiwa era. The young players will be deeply inspired because this event gathers the top-level players of their generation, and the city of Sendai is fully committed to support this event. The admission is free for all matches. I would like to see everyone come out to the stadium to witness the heated competitions and support these young players play in the city of Sendai. 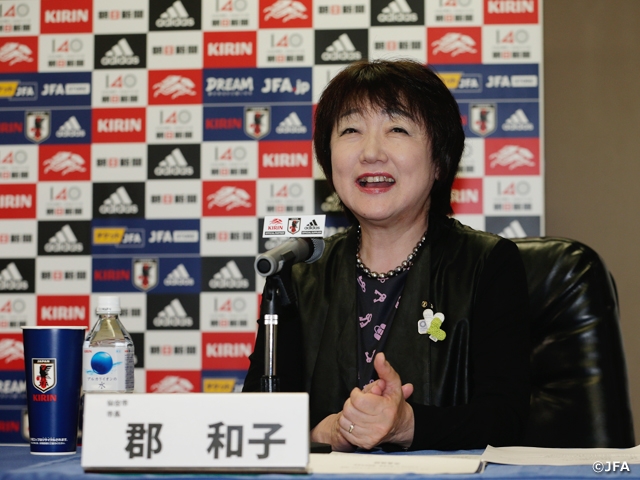