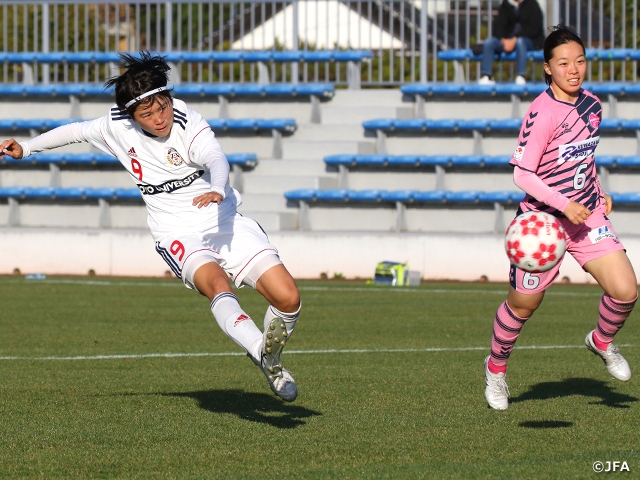 The Empress's Cup JFA 44th Japan Women's Football Championship kicked-off with 10 first round fixtures played on Saturday 26 November. At Seihoku Park Ishinomaki, a university team went up against a Nadeshiko League division 1 side to kick-off the action.

Asahi Intecc Loveledge Nagoya (Nadeshiko 1/Aichi), who finished sixth in the Nadeshiko League Division 1, faced a challenge from Sapporo University Vista (Hokkaido 2), who were competing in the Empress's Cup for the first time.

Nagoya, led by Yamada Nina, who was selected in the Nadeshiko League's best eleven for the first time, attacked Sapporo University from the start. After scoring the opener with a towering header in the fourth minute, Yamada responded to a long feed to break free and score the second goal in the 11th minute. The Nadeshiko League side shifted their formation midway through the first half to keep Sapporo University at bay, while also adding two more goals to their tally to finish the first half 4-0. 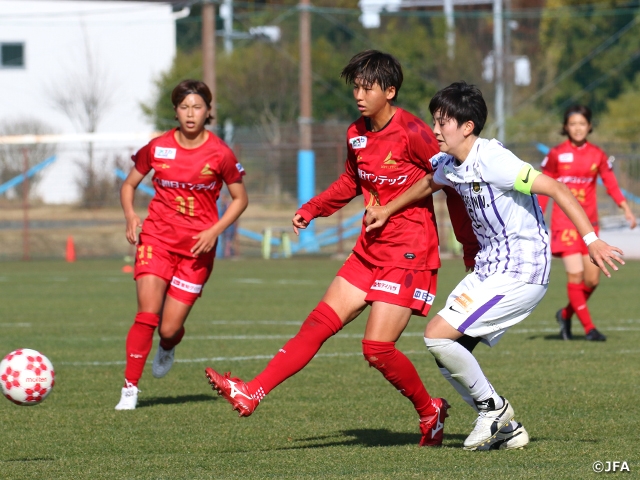 Sapporo University shifted the positions of some of their players in effort to change the dynamics of the match but ended up conceding the fifth goal to Nagoya’s UEDA Momo in the 75th minute, before allowing Yamada to complete her hat-trick in the 77th minute. As a result, Nagoya, who limited Sapporo University to just one shot, advanced to the second round with a convincing 6-0 victory. 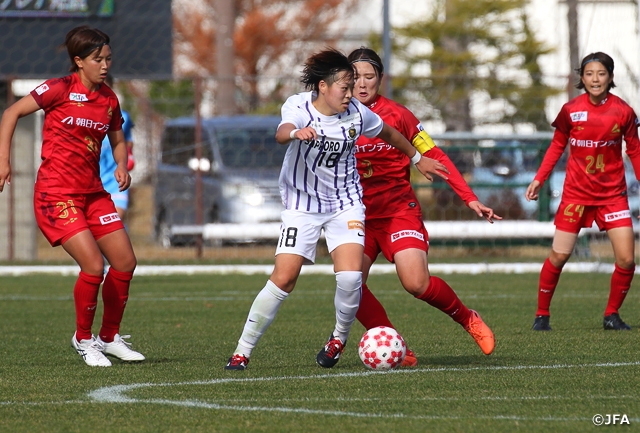 The match started with the two sides exchanging opportunities, as Toyo University’s IMANISHI Naho fired a shot that struck the post, while Hokkaido’s SUZUKI Marina took back-to-back shots in the early minutes. The opening goal came in the 14th minute, when INAYAMA Miyu converted a chance from a counterattack to give the university side the lead. With momentum on their side, Toyo University doubled their lead in the 26th minute, when KITAGAWA Eri struck a powerful shot from distance that captured the net.

In efforts to rally back, Hokkaido introduced SUZUKI Wako to start the second half as their third striker, but couldn’t change the dynamics of the match, as Toyo University continued to dominate. After KADOWAKI Mai and Inayama added a goal apiece in the 47th and 54th minutes respectively, the two players showcased an exquisite exchange of passes to add another goal at the hour mark, as Toyo University advanced to the second round with a 5-0 victory.

FW #18 YAMADA Nina (Asahi Intecc Loveledge Nagoya)
Because the Empress' Cup is a single-elimination tournament, the first round is challenging for every team. However, we were able to earn this victory because we managed to stick with our football style. It was fantastic to see us score goals in a variety of ways. Personally, I want to maintain playing to my strengths while also showing my eagerness to score goals. I am looking forward to playing either side in the second round because Waseda University is my alma mater and Bunnys Gunma FC White Star is our rival in the Nadeshiko League.

DF #5 MOROOKA Tsumugi (Sapporo University Vista)
Facing a team from the first division of the Nadeshiko League, we entered the match with intentions to cause an upset. We wanted to keep the game scoreless for at least 15 minutes, but the early goal ruined our game plan. Although we made an effort to recover, we quickly gave up another goal. This is a bitter pill to swallow because we entered this tournament with the intention of playing on behalf of our senior players who were forced to withdraw from the tournament two years ago. We will now turn our focus towards the All Japan University Women's Football Tournament, where we have set our goals to reach the quarterfinals and beyond.

GK #1 IMAI Yuka (Toyo University)
We were able to confidently play to our strengths while closely monitoring how our opponents approached the match. Playing in the first match of any competition has been a challenge for us, and it took us a while to get used to the whole environment, including the pitch condition. However, the fact that we were able to score the opening goal allowed us to find our rhythm. This year's squad has a strong attack-oriented mindset, the ability to score goals, and the will to compete for the whole 90 minutes. We will evaluate how we performed in this game and work to best prepare ourselves for the second round.

SATO Makoto, Coach (Norddea Hokkaido)
The fact that we failed to capitalise on our early opportunity may have entirely changed the course of the match. We were forced to be in the defensive end for a long time, which led us to lose momentum and concede multiple goals. The players have shown their willingness to take on challenges throughout the season, so as a coach, I am accountable for not being able to incorporate their aggression into the team’s game plan.