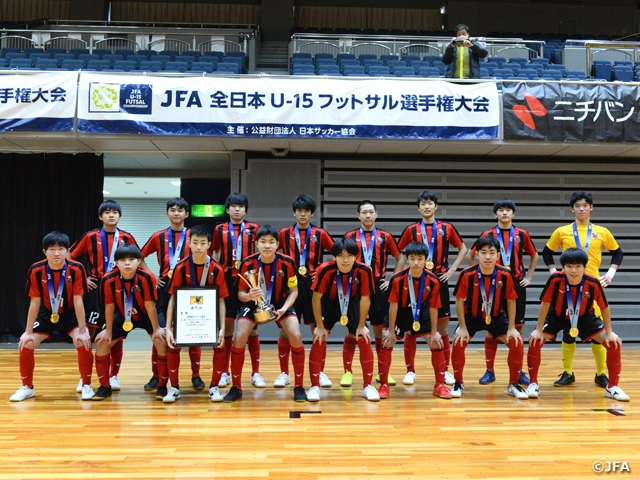 The semi-finals and final of the JFA 27th U-15 Japan Futsal Championship took place on Monday 10 January.

In the first semi-final fixture between Verdelaco Matsusaka U-15 (Host/Mie) and Tokyu S Reyes FC (Kanto2/Kanagawa), Tokyu S Reyes took a 2-1 lead in the first period before scoring three goals in the second period, including the brace of KAYAMA Kito, to win the match 5-1. The Kanagawa side advanced to the final in their first ever appearance in the national tournament. 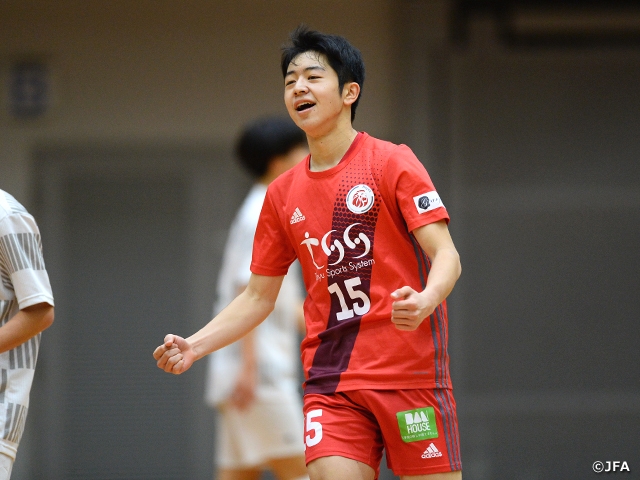 After winning all three matches in the first round, Hokkaido Consadole Asahikawa (Hokkaido1) carried the momentum into the semi-finals to showcase their dominance over Matsuyama Johoku FC (Shikoku/Ehime). As Matsuyama Johoku’s coach KAMEDA Takashi later reflected, “We couldn’t get the momentum going after missing out on our opportunities to take the lead,” Consadole Asahikawa managed to survive the early minutes without conceding a goal and took the lead in the sixth minute with the goal scored by NAKATA Yusei. With momentum on their side, Consadole Asahikawa added two more goals in the first period, before scoring two goals in the second period to win the match 5-0.

In the final between Tokyu S Reyes and Consadole Asahikawa, who were both seeking for their first national title, it was the Hokkaido side who took control of the ball possession in the early minutes of the match. However, despite firing numerous shots, Consadole Asahikawa struggled to get the ball past Tokyu S Reyes’ goalkeeper KUMAZAWA Rintaro. Conversely, Tokyu S Reyes took the lead in the eighth minute with a quick attack that resulted in an own goal.

Despite conceding the opening goal, Consadole Asahikawa managed to keep their composure as SAKAMOTO Kanta, who was named into the short list of the U-15 Japan National Team, later mentioned, “We were able to get used to futsal as we played each match.” With the team being able to showcase their colour on the futsal pitch, KATO Yunosuke converted a deflection in front of the goal to equalise the match in the 11th minute.

The match remained tightly contested in the second half, but set pieces proved to be the difference between the two sides, as Consadole Asahikawa's Nakata scored twice from set pieces in the 18th and 23rd minutes, to give Consadole Asahikawa a two-goal lead. In a game that had previously been dominated by futsal teams that could deploy trick plays in close situations, the football team overpowered Tokyu S Reyes, as coach TOMINARI Hiroyuki later reflected, “We were prepared for their set pieces, but the shots were far more powerful than what we normally experience in a futsal match.” 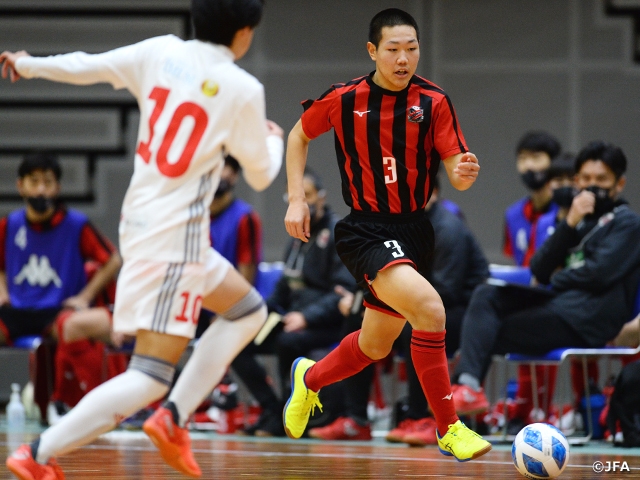 In efforts to rally back from a two goal deficit, Tokyu S Reyes deployed their power-play, but conversely conceded goals from counterattacks, as YOKOYAMA Sota scored three goals in the closing minutes to give Consadole Asahikawa a 6-1 victory.

NAKAMURA Takuro, Coach (Hokkaido Consadole Asahikawa)
After finishing in the top 16 of the Club Youth Football Championship in the summer, we were hoping to win the Takamado Trophy, but were unable to qualify. I am very happy that the players' hard work and dedication have led them to victory. Although there are some fundamental differences between football and futsal, I think that the basic principles of watching the opponent, defending, and attacking with the goal in mind are the same. In that sense, I think we were able to demonstrate what we have been doing in football.

FP #3 NAKATA Yusei (Hokkaido Consadole Asahikawa)
In the final, we had a lot of chances in the first period but couldn't convert them, which made it tough on ourselves. However, in the three years we have been playing together, we have overcome a lot of difficult situations like these, and I feel like we were able to make the most of those experiences in this tournament. I felt a bit guilty when I conceded an own goal, but I was able to redeem myself by converting two set pieces. I am very happy to have won the national title after the disappointment of not being able to compete in the Takamado Trophy. I have no regrets about my junior high school life.

FP #7 SUGAYA Shuto (Hokkaido Consadole Asahikawa)
It still feels surreal, but I am happy that we were able to win the title. The first period of the final was tough, as we couldn't capitalise on our opportunities, but we managed to settle down in the second period. There were stints when we struggled to adjust against the high pressing style of futsal. We gained a lot of experience from this competition, and we were able to challenge ourselves and find things that were effective, so we hope to make the most of this experience in the future.

FP #15 IIZUKA Yuto (Tokyu S Reyes FC)
I am glad that we were able to demonstrate what we have been working on in our trainings and finish as the runners up. In the final, our opponents had the upper-hand in terms of technique and physicality. I felt that we need to improve our physicality, while also working on our technique, because I think that if we can pass the ball with a little more accuracy, we can score more goals. Once I enter high school, I will do my best to become the national champion, which we could not achieve at this tournament.