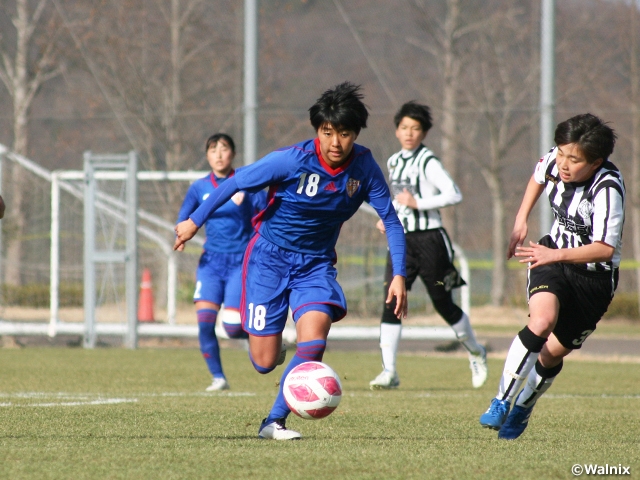 The second round of the 29th All Japan High School Women's Football Championship took place on Monday 4 January, as the eight teams advancing to the quarterfinals have been determined.

The first fixture played at Miki Sogo Bosai Park Athletic Field featured a matchup between Utsunomiya Bunsei Girls' High School (Kanto7/Tochigi) and Gyosei International High School (Kanto2/Chiba). Although the match started with Gyosei International creating numbers of opportunities in the early minutes, it was the Utsunomiya side who scored the opening goal. The goal came in the 16th minute, when KAKUNO Koharu connected with a cut back delivered by WAKUI Reira to put Utsunomiya Bunsei ahead. 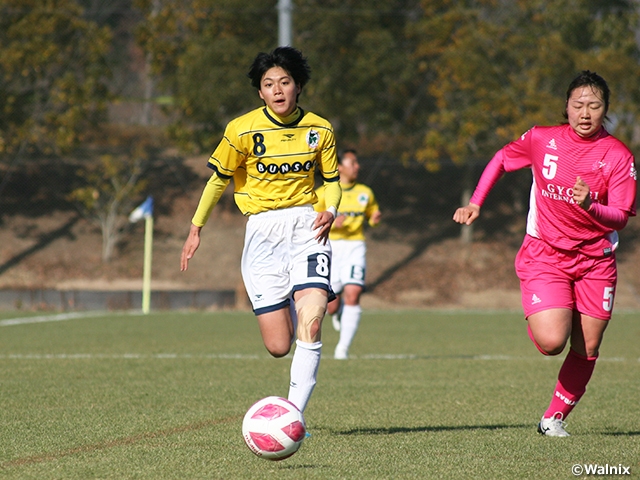 In addition to Kakuno, who was placed in the right side, Utsunomiya Bunsei introduced another winger, HAGIWARA Yuna, at the left side to penetrate the flanks in the second half. Gyosei International on the other side, shifted their point of attacks towards the centre, moving SATO Mio to a more central role, as coach HOSOYA Takuro later reflected, “We should be able to apply more pressure by initiating our attacks from the centre.”

With 15 minutes left on the clock, Gyosei International utilised their substitutes and started to apply more numbers upfront. Their aggression was paid off in the 66th minute, when they earned a PK, which was converted by ABE Airi to bring the two sides back on equal terms.

Gaining momentum from the equaliser, the Gyosei side continued to attack the Utsunomiya goal, as TSUCHIYA Rinne scored the go-ahead goal just a minute later. After Abe converted a direct FK in the 75th minute, Gyosei International High School won the match 3-1 and earned their ticket to the quarterfinals. 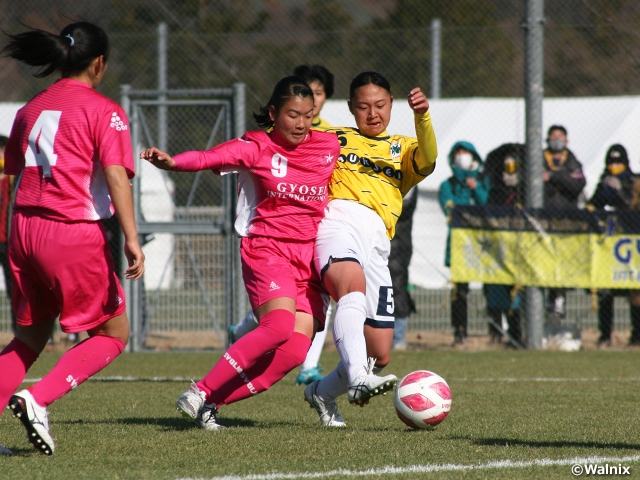 In the second match played at Miki Sogo Bosai Park Athletic Field, Japan Soccer College High School (Hokushinetsu2/Niigata) squared off against Hokkaido Bunkyo University Meisei High School (Hokkaido1). The match saw early action, as YAMAMOTO Hao scored the opening goal for Japan Soccer College (JSC) in the eighth minute. JSC’s INAMURA Yukino scored back to back goals in the 21st and 25th minute to extend the lead. With KITAZAWA Ami adding another goal in the 38th minute, JSC took a 4-0 lead into halftime. 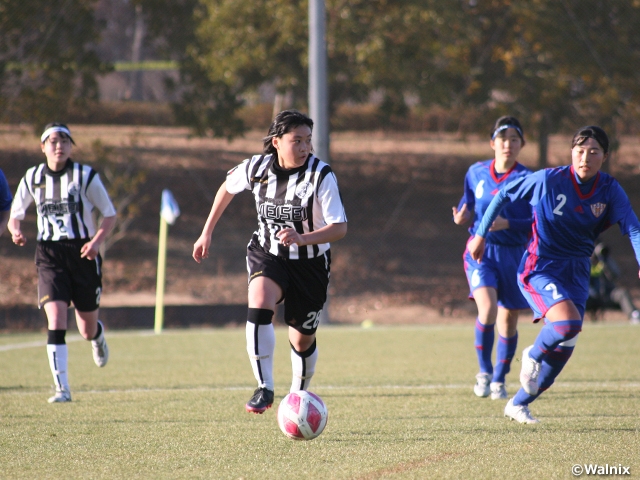 In efforts to change the dynamics of the match, Bunkyo University Meisei made changes to their line-up during halftime. For the Hokkaido side, this was their final tournament under the current school name, as coach SEINO Kuniyasu mentioned, “The school name will change next year, so the seniors entered the match with strong intentions to make a deep run.” However, Bunkyo University Meisei conceded two more goals in the second half, as Japan Soccer College High School made their way into the quarterfinals. 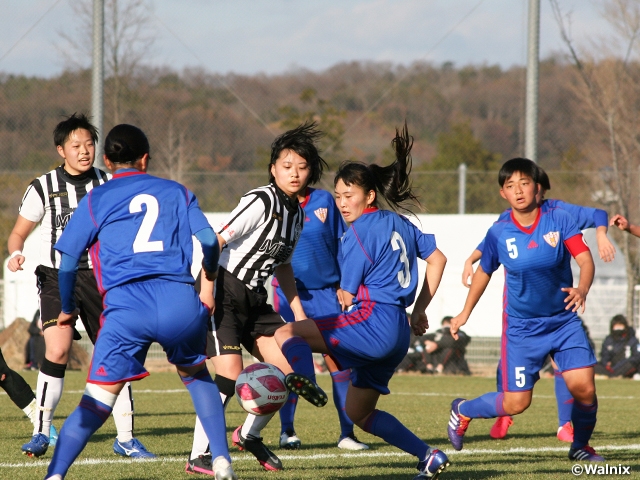 HOSOYA Takuro, Coach (Gyosei International High School)
A knockout tournament has a unique atmosphere, and our players looked nervous in the first half. Our team tactic did not go well against the opponent’s system, neither. I told my players during halftime to take more risks and initiate the action to score goals in the second half. With this being our first tournament appearance, we lack experience compared to other teams, but our players overcame that disadvantage by showcasing an excellent performance. Our players looked very strong and dependable today.

ABE Airi (Gyosei International High School)
Although we were facing a team we have beaten at a training match before, we entered the match as a challenger. We couldn’t connect our passes and struggled to find our rhythm at first, but we managed to make the adjustments as the match progressed. Despite being down by a goal, we were very enthused when we huddled up before the second half. I was fully confident when taking the PK, and the FK went just where I wanted. In order to achieve our goal of winning the national title, we will take on one match at a time.

INAMURA Yukino (Japan Soccer College High School)
It was great that we were able to score goals in the early minutes, but we started to lose our focus in defence, which allowed our opponent to create close chances in the second half, so that is an aspect we must improve on. I didn’t intend to score that CK. I initially aimed towards the far post, but it ended up in the back of the net. Entering this tournament, our goal was to reach the semi-finals. We were pretty confident that we could achieve that goal, too. I feel that our team is in the best form thus far.

SEINO Kuniyasu, Coach (Hokkaido Bunkyo University Meisei High School)
Most teams conceding goals in the first 10 minutes have lost their matches at this tournament, so we really needed to play patiently, but we ended up conceding early and lost grip of this match. There was a huge gap at the individual level, and we did not have what it takes to reach the quarterfinals. Today’s opponent was at a level we don’t see at Hokkaido, but it made me realise that we need to develop players like them to reach the quarterfinals. Although we suffered a huge loss today, our team played well yesterday. This loss has given us a precious learning experience. Our school name will change, but we will try to make the most of this experience, so that we can look back one day and say, “we were able to overcome our obstacles because we played that match.”