While Aomori Yamada reached the tournament final in back-to-back years, it was the first time in 24 years for Shizuoka Gakuen to feature the national championship, as coach KAWAGUCHI Osamu reflected on the early minutes of the match, “Our players looked very nervous.” The match started with Aomori Yamada taking the initiative, as they applied aggressive pressure from the front line. Shizuoka Gakuen tried to build their offence around the two midfielders MATSUMURA Yuta and KOYAMA Naoki, but their opportunities were shut down by the Aomori Yamada defence.

The opening goal came in the 11th minute, when Aomori Yamada’s TAKEDA Hidetoshi earned a freekick deep in the Shizuoka territory. From this freekick, FUJIWARA Yudai connected with a delivery sent by FURUYADO Riku to score the opening goal. The Aomori side doubled their lead in the 33rd minute, when Takeda earned a penalty kick and converted the spot kick himself to make it 2-0.

Despite conceding a two goal lead, coach Kawaguchi remained confident about his team, “We weren’t expecting to keep a clean sheet. As long as we kept our playing style, we knew the chances would come for us.” During additional time of the first half, NAKATANI Soshin responded to a loose ball inside the box to cut down the deficit in half for Shizuoka Gakuen.

The second half saw Shizuoka Gakuen taking the initiative, as they introduced KUSAYANAGI Yusuke to the game to add layers to their offence. With the Shizuoka side picking up their pace in offence, ASAKURA Ren later reflected, “With our opponent tightening up the central area, we saw more opportunities created in the flanks. We kept shifting our point of attack according to our opponent’s defensive approach.” The equaliser was scored in the 61st minute, when KANO Haru responded to a through ball sent by Kusayanagi, as the striker converted the opportunity with his left foot.

Following the equaliser, the momentum swung towards Shizuoka Gakuen, as Matsumura mentioned after the match, “The tide had shifted completely, and it was only a matter of time for us to score the third goal.” With Shizuoka Gakuen showing their dominance on the pitch, Aomori Yamada’s coach KURODA Go described the situation, “We weren’t able to possess the ball upfront and we were forced to drop deep in our own territory.” The defining moment came in the 85th minute, when Nakatani struck a header into the Aomori Yamada goal to give Shizuoka Gakuen the long awaited lead. After defending through the final minutes of the match, Shizuoka Gakuen was crowned as champions for the first time in 24 years. 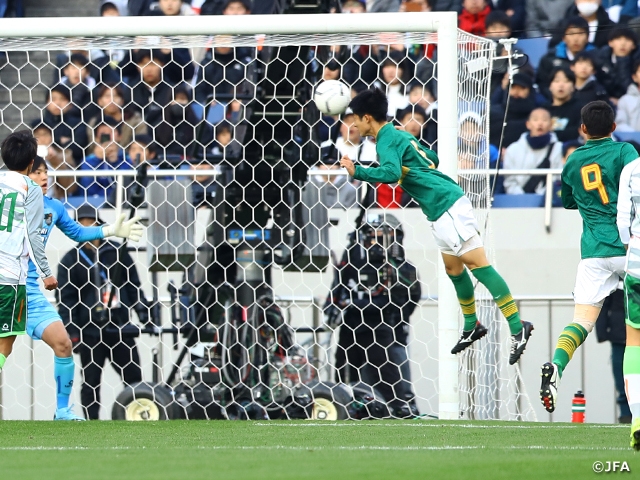 KURODA Go, Coach (Aomori Yamada High School)
We played too defensively at the quarterfinals and semi-finals, so we planned on applying aggressive pressure from our frontline in this match. We managed to score two great goals from this approach, but our mentality shifted defensively after scoring the second goal. Our game plan went in shambles after we conceded the goal from our own mistake at the end of the first half. It was disappointing that we couldn’t execute our game plan, especially in the second half. Our defence was solid throughout the tournament, but we gave up some crucial goals in this match that ultimately cost us the title. However, the players showed great improvements to make it this far, and I am very thankful for their performances.

FURUYADO Riku (Aomori Yamada High School)
We managed to utilise the width of the field and showcased some good short-counters during the early minutes of the first half. However, the goal we conceded at the end of the first half really hurt us. With our opponent showing more energy in the second half, we wanted to keep our composure to defend through the half, but we failed to execute our game plan and conceded the equaliser. The fact that we couldn’t follow through on our own football style cost us the match.

KAWAGUCHI Osamu, Coach (Shizuoka Gakuen High School)
We weren’t able to pick up our pace and showcase our usual performance in the first half. However, after making the adjustments during halftime, we managed to find our rhythm in the second half. We were only trailing by a goal, so I sent my players onto the pitch by telling them to play aggressively. There weren’t many chances, but we managed to capitalise on our few opportunities to win this title. Our school has won the title as joint champions in the past, but this will be our first solo title. It was like a dream scenario to come from behind to win the title in front of a crowd over 50,000. I was truly overwhelmed.

TANABE Shuto (Shizuoka Gakuen High School)
We conceded the early goal, and it was fun to chase the lead. We were giving up the ball too easily and couldn’t connect our passes in the first half, but we managed to make the adjustments in the second half. It was great to see our attackers do their job. After taking the lead, we still had about 10 minutes left on the clock, so we focused on holding onto the lead. We conceded two goals at the final of the Inter-High School Championships qualification and lost the match. Compared to that match, we were able to come from behind to win this match, so we can really tell that we have improved over the year.