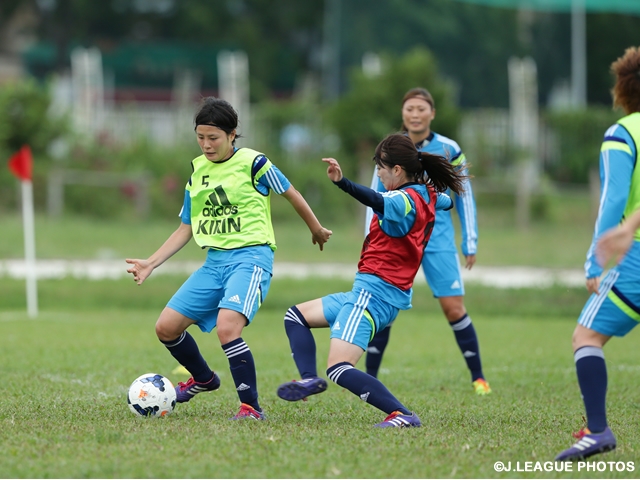 Nadeshiko Japan held a training session in Ho Chi Minh City, in preparation for the final group stage game against Jordan in the AFC Women's Asian Cup.
With a day’s break between each game, most of players, who started against Vietnam yesterday, stayed at the hotel to recover, whereas others including Fukumoto and Miyama practiced on the pitch for an hour.
Sasaki, the team coach, said he would select a full-strength team to chase three points from the next game, even though Nadeshiko Japan need only one point to qualify for FIFA Women's World Cup next year. Sasaki stated that he would use players, who have yet to play, so that ‘they would all advance to the knockout stage as a team.’
Nadeshiko Japan met Jordan once in the Asian Games previously in 2006, when Japan won 13-0. The Jordanians know Nadeshiko Japan quite well. The Jordan coach Okiyama, who used to head the JFA Academy Fukushima, was sent by the Japan Football Association to Jordan to improve their national team.
Nadeshiko Japan held a video session in preparation for the coming match. The match kicks off at 19:15 (21:15 Japan time). 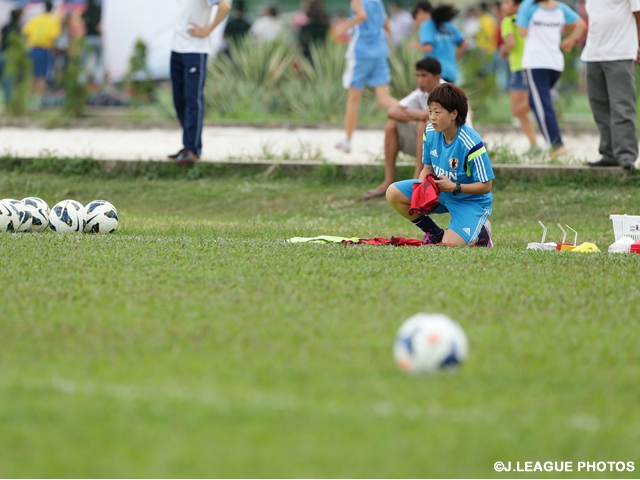 SASAKI Norio Heado Coach
Luckily no one picked up an injury and we could play our way as much as I hoped to. I was planning to use all the players including the substitutes in three group stage matches so that every player can get competition experience before advancing to the knockout stage. I’d say my plan is going smoothly. Some players might be playing for the first time in this competition, but I believe that they will do their best. It is vital that budding young players play with confidence and without fear of failure. I expect them to play Nadeshiko style – never give up in any condition until the final whistle.
Our aim is to win the AFC Women's Asian Cup. However, for now, we will focus on qualifying for the FIFA Women's World Cup tomorrow.

KOHATA Shiho（Urawa Reds Ladies）
The goalkeeper usually gives instructions on detailed line control and the preparation of the defensive line in training sessions. When I’m on the pitch, I’d like to communicate with the keeper to make sure we intercept the ball at an early point to prevent the other side from having the ball in their font line. I will do my best even when I haven’t got the ball to react any circumstances.

NAOMOTO Hikaru（Urawa Reds Ladies）
I’ve been watching our previous matches from the bench and saw a lot of speed, power and energy. It’s very tough to win the Asian Cup, just like it is for the FIFA Women's World Cup. I find it a bit difficult adjusting timing or using space well as it differs from Japan. I must do my best in any condition because I know it’s tough for anyone. Whichever position I get, I want to score or assist a goal whenever I can. As a team it’s important to score early.