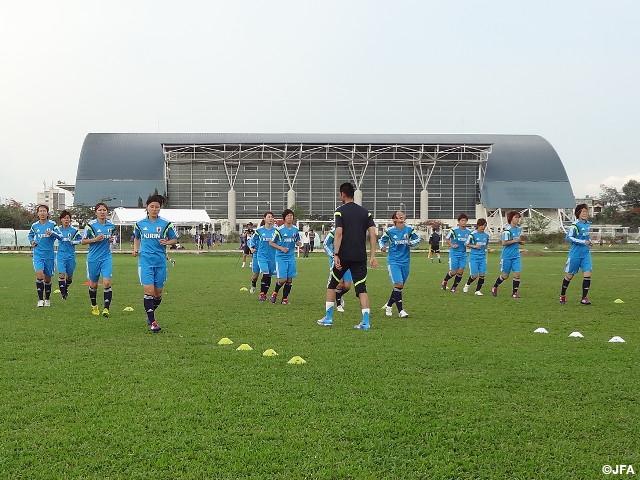 The morning practice session was cancelled due to the conditions, and instead players went for a walk or did some stretches. In the afternoon session, following a meeting, they played four-goal games and practiced shooting to get used to the pitch and the heat and also to gauge their fitness and skill levels. In the exhausting humidity, they worked out for an hour and a half. 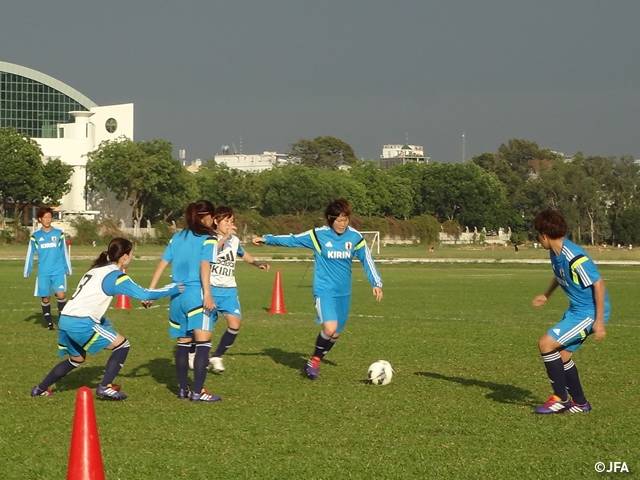 In the evening, the whole team went to the AFC Futsal Championship final to support Futsal Japan National Team. They had to leave in the middle of the game because of their schedule, but watched the moment, back at the hotel, when Japan won on penalty kicks and became back-to-back champions. This gave Nadeshiko great encouragement, as they also have some tough matches ahead against Asian teams.

SAKAGUCHI Mizuho（Nippon Television Beleza）
It is much hotter and much more humid than I expected. Playing through the day in these conditions is really hard, but we have strength in depth, and we will share the load among the team. As the pitches as well as the balls are different from usual, I will have to adjust my thinking to adapt to these conditions. I want to prepare myself well, as I know we have to play in any condition. Winning the first match against Australia is vital and we will beat them.

KIRYU Nanase（Sky Blue FC/America）
I am not in top shape yet, flying straight from America after a match. I will be at my best soon, though. I will bring the techniques and use of space I learned in America, to contribute to our victory. This heat is the same for all the other players and teams. I will get used to it quickly, and focus fully through to the last game of the tournament.