As a part of international aid programme “Japan-China Forest and Tree Planting International Solidarity Project” promoted by the Ministry of Foreign Affairs of Japan, Nepal National Team held a training camp at J-GREEN Sakai in Osaka Prefecture from Saturday 12 August and finished all their activities and departed Japan on Sunday 20 August.

Apart from practice and training matches, the team visited environment and disaster prevention facilities as well as Hyogo Prefecture, where the Great Hanshin-Awaji Earthquake struck and caused serious damage in the region. Furthermore, they studied the model and the process of reconstruction in Kobe City.

On Friday 18 August, Secretary General YOSHITSUBAKI Masamichi of Citizens towards Overseas Disaster Emergency (CODE), a non-profit organisation that dispatched their workers to aid the disaster relief efforts of Nepal earthquake, and the Nepalese students currently studying at the Japan University of Economics gave presentations on disaster relief in Nepal at the Kobe City Hall. Moreover, they paid a courtesy visit to Vice Major of Kobe City TAMADA Toshiro and exchanged various ideas on the related subject.

On Saturday 19 August, the main event of their camp, “Nepal Disaster Relief Friendly Match with Vissel Kobe U-18”, took place at Miki Sogo Bosai Park Second Athletic Field. The people living in Kobe as well as the Nepalese staying in Japan came to the stadium and cheered the players from the stands.

The results of the practice matches in the second half of the training camp were as follows.

GYOTOKU Koji, Coach
The training camp was held in an unfamiliar foreign city (Osaka), but all of the activities turned out to be a valuable experience for the players. These experiences were new to the players, and the impressions might have varied from player to player. After returning to Nepal, it is important that the players will share their experiences not only in football but also of disaster relief programmes and inform the importance of disaster prevention to their people as well.

The impression of Japanese football is that the number of teams, which play systematically, increased in recent years. They have a stronger emphasis on team tactics over individual plays. Having never experienced it before, the Nepalese players had a hard time to cope with this new style of football. By holding a training camp in Japan, it has given the players a great opportunity to experience the different playing styles to which they are not accustomed. I believe one of the important achievements of the camp was that everyone realised what they need to improve and work on as well.

ANIL GURUNG, Captain
It was an enjoyable training camp. Not limiting to football, I got an impression that the Japanese society and their structure itself are very systematic. I have played football matches in many countries and I believe that the educational system in Japan is very comprehensive from young ages. Eating habits and lifestyles were quite different, and the level of football was superior to us. Each player had excellent techniques as well as a good understanding of their plays. In addition, their tactics were quite advanced as well.

Japan often face many natural disasters, but has taken the necessary measures including the educational system whereby the people study the countermeasures against disasters from young ages. Moreover, there was a warehouse where they stored emergency supplies at Miki Sogo Bosai Park Second Athletic Field. Unfortunately, in Nepal, we do not take similar measures and prepare for disasters. Through this camp, we got all sorts of information on disaster prevention and, in particular, learning how to use the fire extinguisher was a great experience for me.

We stayed at J-GREEN Sakai where they had a wonderful football facility. I was impressed when I observed that the Japanese players from children to adults were all devoted to the sport. In Nepal, the method of coaching varies depending on the coaches, and the players can get easily confused. In contrast, I felt that the Japanese players pay close attention to consistency and harmony within the team. This could be observed not only in their style of football, but also from the fact they spent most of their time together including meals.

It was also wonderful to observe the Japanese behaviour of showing respect to the elderly as well. We had a chance to watch a J. League match where I saw an example of fair-play when a player extended a helping hand to an opponent. I would like to follow this example once I return to my home country as well. 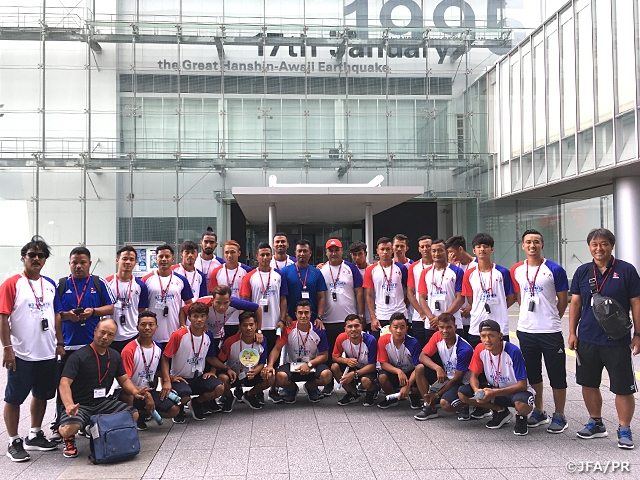