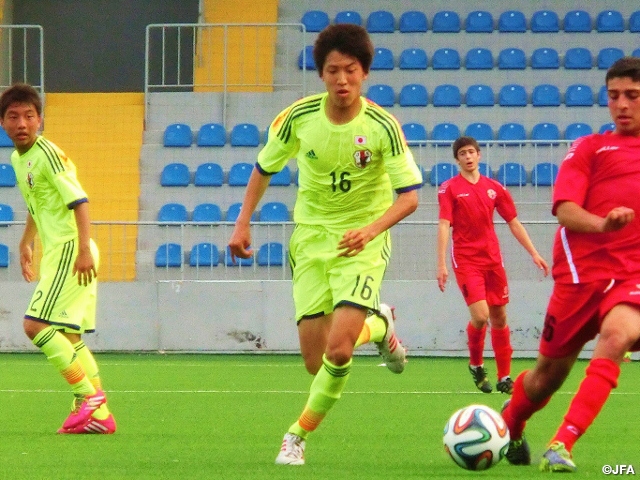 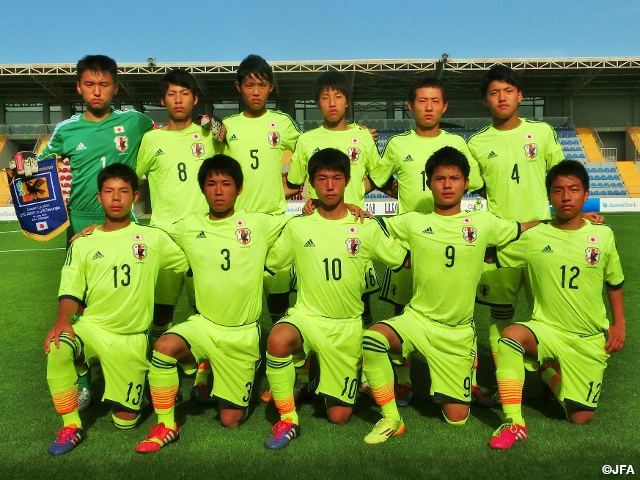 The second match in the group stage, Japan needed to win by more than three goals, to top Group C and advance to the semifinals.
Japan retained possession of the ball from the start, passing at a good pace and moving fluidly around the pitch. Consequently, Georgia literally had to throw everything into preventing Japanese goal-scoring opportunities.
In the 30th minute Hanya Yosuke opened the scoring with a pass from Tanaka Kosuke. And in the 33rd minute, just after the first goal, Yasui Takuya, who was fresh off the bench, swept in a loose ball from a free kick, building a two-goal lead.

In the second half the game continued in a similar vein, but Japan couldn’t find the back of the net despite many scoring opportunities. Less movement and less smooth passing from the Japanese players and then some careless play gifted Georgia a penalty kick and they scored their first goal.
Although Japan went back on the attack, the Georgian players’ power and possession prevented them from scoring again. In additional time, Georgia scored through yet another penalty kick, levelling the game. The U-16 Japan National Team will play in the fifth to eighth-place playoff round.

KIMURA Yasuhiko (JFA National Coaching Staff)
We tied with Tajikistan in the first match. So we needed to win by more than tree goals to make the semifinal. We’ve been focusing on making as many goal-scoring opportunities as possible and scoring. In the first half, we had a good amount of nice plays towards the goal and some shoots, which got us a two-goal lead. However, in the second half, our players’ stamina ran out a bit and we couldn’t retain the possession well. And again we conceded a penalty just before the whistle, ending up with the draw. Now we know our task: the accuracy of shooting and the amount of movement. We will play against one of the strongest Asian teams, Uzbekistan, in the consolation final tomorrow. We will get ourselves into good condition for the match.

HANYA Yosuke（FC Tokyo U-18）
I played a flexible role in the match today. I focused on making as many shots as possible by receiving many passes. However, it was difficult to make scoring opportunities due to the lack of movement from the kick-off. Learning from this, I will play actively with or without the ball in the next game.

HANYA Yosuke（FC Tokyo U-18）
We played the game today, thinking, as a team, how to make more shots on goal than the previous match. We were checking the opponent’s defensive line to tell whether they would attack down the wings or through the centre. Although there were some improvements in the number of shots and our approach in attack, we need to be more accurate. Personally, I need to play more actively, as I couldn’t impact the match even though I came off the bench.

SAKURABA Riki（Consadole Sapporo U-15）
I’ve been practicing throughout this competition. I’ve found and learned many special things, which I want to use in practice sessions and games from now on.

TANAKA Kosuke（Kyoto Sanga F.C. U-18）
My challenge was ‘how well can I prepare’ for the match, and I am fairly satisfied with the result. In the first half I received the ball freely and contributed to the team, but in the second half it was difficult to play in the same way. There are still many things to be improved, such as taking on fluid regularly, so I will try harder to master those. 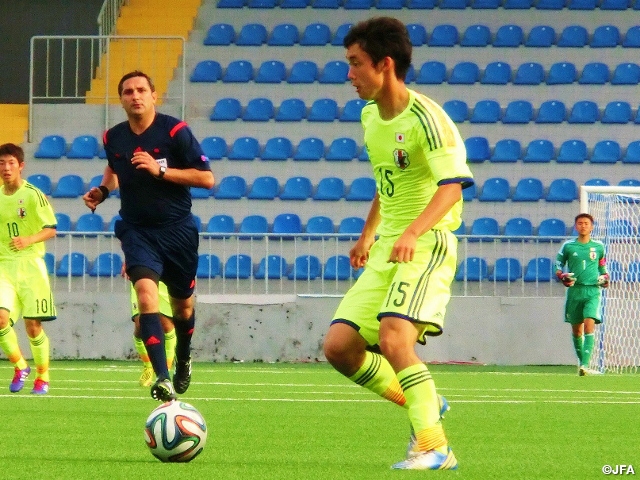