From Pitches in Asia – Report from JFA Coaches/Instructors in Asia Vol.17: INOUE Kazunori, Coach of the Cambodia Academy and U-16 Cambodia National Team 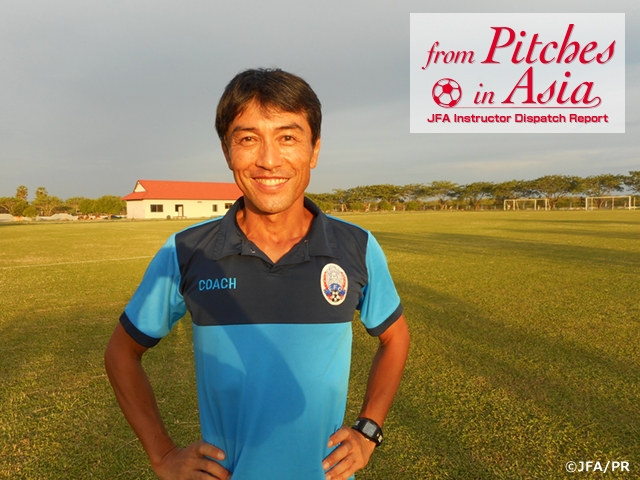 The 17th edition of “From Pitches in Asia” report, in which we introduce the viewpoints of instructors’ active in Asian countries, is written by INOUE Kazunori, Coach of the Cambodia Academy and U-16 Cambodia National Team.

It has been 4 months since I started working in Cambodia. There is a Japanese shopping mall in the capital Phnom Penh, where I can get Japanese food and groceries. Hospitals here are not different from Japanese ones at all, they are clean and reliable. The biggest challenge for me is the hot weather. Since I spent many years in Sendai, where the weather was cooler and easier for me, days of 40℃ in Cambodia are sometimes too hot.

People in Cambodia are very kind, and they always give me beautiful smiles. They have a big respect to elders, and I am impressed by children’s attitudes to elder people. Family ties are very strong in this country. I often see 4-5 family members ride on a motor bike and go out together, and enjoy meal. In addition, they are very religious, too. During a training camp in Japan, we visited Dazaifu Tenmangu Shrine, where the God of study is worshiped, and I saw all players prayed to the God very seriously. Later, they told me that they thought they would be genius just by praying.

Characteristics of Cambodian players and my coaching philosophy

Since I am coaching younger players, I focus more on basic skills, individual tactics, and improving fitness. Actually, this is important for this category in any countries. Cambodian players are unique, and the characteristics of teams change depending on formation of the players, which is very interesting for me. Each player has each area of improvement, but I try to focus on their advantages rather than disadvantages to maximise their good aspects as much as possible.

I usually request players to communicate in English, not in their official language Khmer.  Based on my request, the Academy has increased their time to study English after dinner. Now more players can enjoy easy conversations in English, which makes a good match with my developing English. 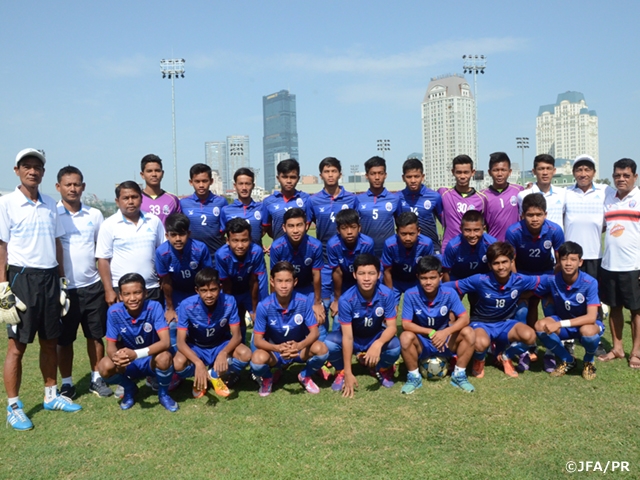 The former Coach of the Academy, Mr. IKI Yusuke and I have known each other for a long time since we both worked for the youth development of Vegalta Sendai (1st Division of J.League club). I used to contact him very often while he was on duty in this country, which became my advantage now since I could start working in Cambodia with basic understanding about football in Cambodia. I often hear many stories of his days in Cambodian from colleagues; and I can imagine he had a lot of challenges to start this big project. I deeply appreciate his tremendous effort to make this solid foundation; where we can continue to build more concrete foundation today. I regularly get in touch with Mr. Iki in order to check the history and current situation of the team to make further development.

Since Mr. Iki had a great trust of the players and staff, I was unconditionally trusted from the first day as his Japanese successor and warmly welcomed before doing anything for them. Both the players and staff try their best to respond to my requests. They try to foresee and work well to avoid problems beforehand. I heartily appreciate Mr. Iki for setting this mentality into the team. Now my mission is to encourage further development of this team.

Two of my Japanese colleagues Mr. KARAKIDA, Referee Director, and Mr. OHARA, Technical Director are also important for me. It is a big support for me to get local information and the characteristics of Cambodian people in Japanese. Cambodian referees do not seem different from Japanese referees, and I believe this is a fruit of Mr. Karakida’s effort on development of local referees. Mr. Ohara shares with me the information about players from all over Cambodia, coaches, and activities of each age group. His experience as a Coach of Bhutan National Team also gives suggestions for me to work as a coach of national team in foreign countries. Three of us working in different fields can mix the advantages of both Cambodia and Japan to make this country a unique and interesting team in South East Asia.

Our team has participated in a competition held in Japan. The biggest outcome from this experience was that I could see the difference between the Cambodian players/team and those of Japan by comparing them directly, which affected a lot for future training plans for the team. The result of the competition was 1 win and 4 defeats - 5th place in 6 teams. However, this one single victory in Japan gave the Cambodian players more confident. They realised that their daily hard work led them to this win, and they are even more enthusiastic to work harder. We also had another training camp in Vietnam, where we finished 1 win, 1 draw, and 1 defeat. Now we are beating more foreign teams.

The AFF U-16 Championship will be held in Cambodia next month, and we aim to win the title. I set this goal to draw the best of the players and the staff. In Cambodia, thousands of supporters come to the stadium to root for national teams even for under age category. Local media picks up activities of the U-16 team, and local clubs who send the players are very cooperative. Football Federation of Cambodia planned overseas camps in Japan, Vietnam, and in Thailand to train the team towards this championship. These supportive attitudes express the high level of expectation for the team. I am proud of this and feel a big pressure and responsibility at the same time. I will do my best and give all for the team to achieve our goal.

I didn’t feel much when I was coaching in Japan, but when I got to see Japan’s football from outside as an opponent during our training camp in Japan, they play very strong, and most of Japanese teams gave us good impressions with their skills and fair play spirit. Their perfect organisation, hospitality and behavior of parents during the competition were amazing. For all of us including myself, Japan’s football is our admiration. Japan is one of good leader in Asia, setting a good example to Asian countries, which can be proud in terms of training and holistic education. This is my discovery by working abroad.

Football in ASEAN is developing rapidly along with their economy, and I expect the training environment for younger players will also be developed. In the near future, they will be competitive to Japan. There are many people in South East Asia who like Japan and want to learn from us. I hope to have more exchanges among Asian countries through football at grassroots level. 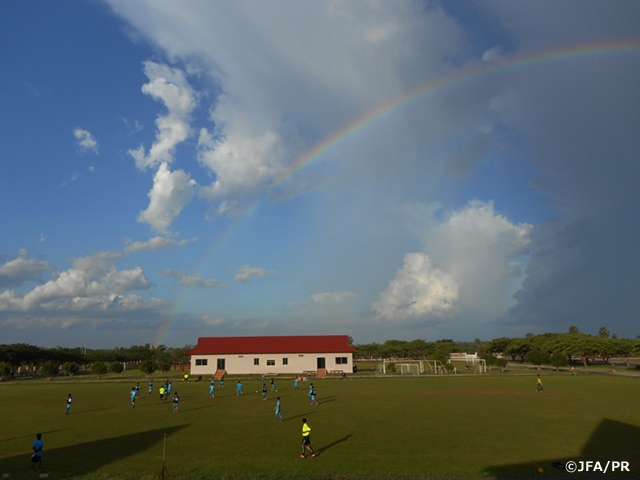 HOME CSR NEWS From Pitches in Asia – Report from JFA Coaches/Instructors in Asia Vol.17: INOUE Kazunori, Coach of the Cambodia Academy and U-16 Cambodia National Team