The 14th issue of “From Pitches in Asia,” reporting voices of instructors in Asian countries, is from Mr. KUBO Shinichi, who worked as a physiotherapist of Vietnam National Team.

I accompanied Vietnam National Team, led by coach MIURA Toshiya, as a physiotherapist several times since February 2015.  Football is the most popular sport in Vietnam and the national team attract so many people. Some of the players are seen as idols like pop stars, and it seems their popularity is less related to football itself.  Fans and media are excited only when a particular player gets the ball.

At the AFC U-23 Championship 2016 Qatar, where Japan won the title, the Vietnam team were eliminated in the group stage. Before the competition, people's interest was high, and there were many of media coverage during the prep camp in the country.  After the team arrived Qatar and until the opening day, there was no Vietnam media on site because of the geological reason, which was good for us to concentrate on preparation.

In Vietnam, Coach Miura often visited stadiums to watch the domestic league and called up a lot of players who had not yet been selected to the national team. Such players looked excited and were loyal to the coach, which impressed me a lot.  The coach is not a person who often says jokes and talks to players. He got at them intensely at times and the players rarely talked to him during training - the only exception was Le Cong Vinh*.
*Striker so-called "Hero of Vietnam" who played for Consadole Sapporo as the first J.Leaguer from South East Asia.

Working for the National Team

I always kept in mind that "I am a representative of entire Japanese." Because they think "My behaviours equal those of the Japanese as a whole," I tried to replicate what I was doing with a Japanese team as much as possible. I arranged my approach in Vietnamese style and tried to communicate with them on an equal base.

I had worked for the team for a few separated periods and compared to the beginning, more players are conscious on recovery and take care of themselves.  The body of the players who are back to their clubs and keep training were obviously getting bigger. There was a clear difference between the players who did and did not maintenance on their body.  Local trainers also have become more prepared and able to predict players' next action. 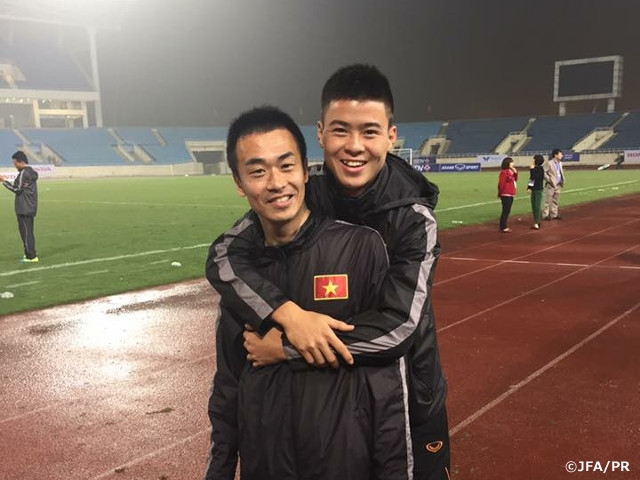 When culture is different, life custom is also different. At my first visit, I was shocked at almost everything such as the number of motorcycles and local foods, however, everything became normal after a year.  I have adapted to Vietnam well enough to forget what I was shocked at.

One of the most memorable episodes during my stay was that my lost mobile phone got back to me. When I was heading to the airport by taxi to go back to Japan, I left my mobile phone that I was using in Japan in the car. What's to lose? So I searched all over for it, and finally found out the taxi driver delivered it to my hotel. It was a wonderful experience to know the kindness of the people of Vietnam.  In fact, the day coincided with my second child's birth, and I was unable to reach anyone, which made my day unforgettable.

When you work overseas, you can recognise the strength and weakness of Japan itself and Japanese people. Different countries have different way of thinking.  People can grow as a human by experiencing such differences and making efforts to pursue our goal.  Like many people say, you should go overseas when you get a chance.

Finally, I would like to express my appreciation to Japan Football Association and Coach MIURA Toshiya, who gave me this opportunity.